•Visit the most vibrant Latin American cities of Santiago, Buenos Aires and Rio de Janeiro, and discover amazing landscapes and natural gems as you travel from Chile to Argentina, crossing the mighty Andes, and onto Brazil.
•Delve into the local culture of these diverse countries with some wine tasting in the famed Mendoza wine region, a day at an estancia in the Argentine pampas, tango in Buenos Aires, and samba and relaxation at the beach in Rio de Janeiro.
•Experience the grandiosity of Iguazu Falls, from both sides of the Argentina and Brazil border.

After arrival at Santiago International Airport, embark on a tour of Chile’s capital. Start with the historic and cultural heart of the city – Santiago’s Plaza de Armas and its cathedral. Walk along the Ahumada Boulevard to the 18th-century Moneda Palace, Chile’s presidential offices. Visit the Pre-Columbian Art Museum with its extensive collection of artefacts from the Maya, Aztec and Inca civilizations. Drive to the bohemian neighbourhood of Bellavista and up to San Cristóbal Hill for a magnificent view of the city and the Andes. Early afternoon transfer to the hotel. Free time to relax before dinner. (D) 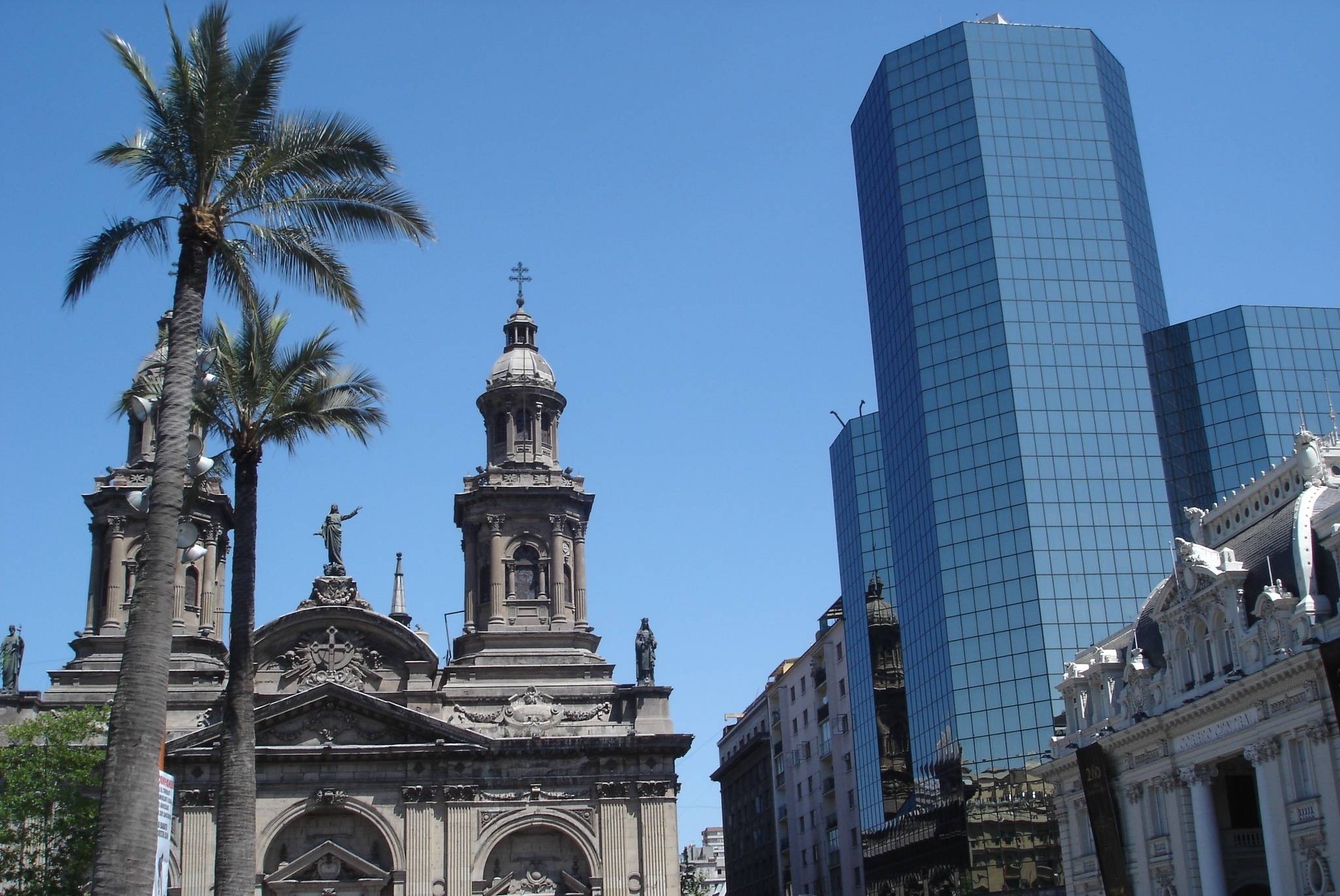 Travel across the valleys of Curacaví and Casablanca to the Pacific coast. See the beaches of Las Salinas and Reñaca and visit Viña del Mar, also known as the garden city for its beautiful parks and floral displays, and highly praised by Pablo Neruda for its charismatic atmosphere.

Visit the Municipal Casino, before continuing to the charming colonial city of Valparaíso, a UNESCO World Heritage Site where stairways and old funiculars lead up to the 42 hills on which the city is built. Visit La Sebastiana Museum, one of the houses of famous Chilean poet Pablo Neruda (Nobel Prize for Literature), offering impressive panoramic views of all Valparaíso. (B,D) 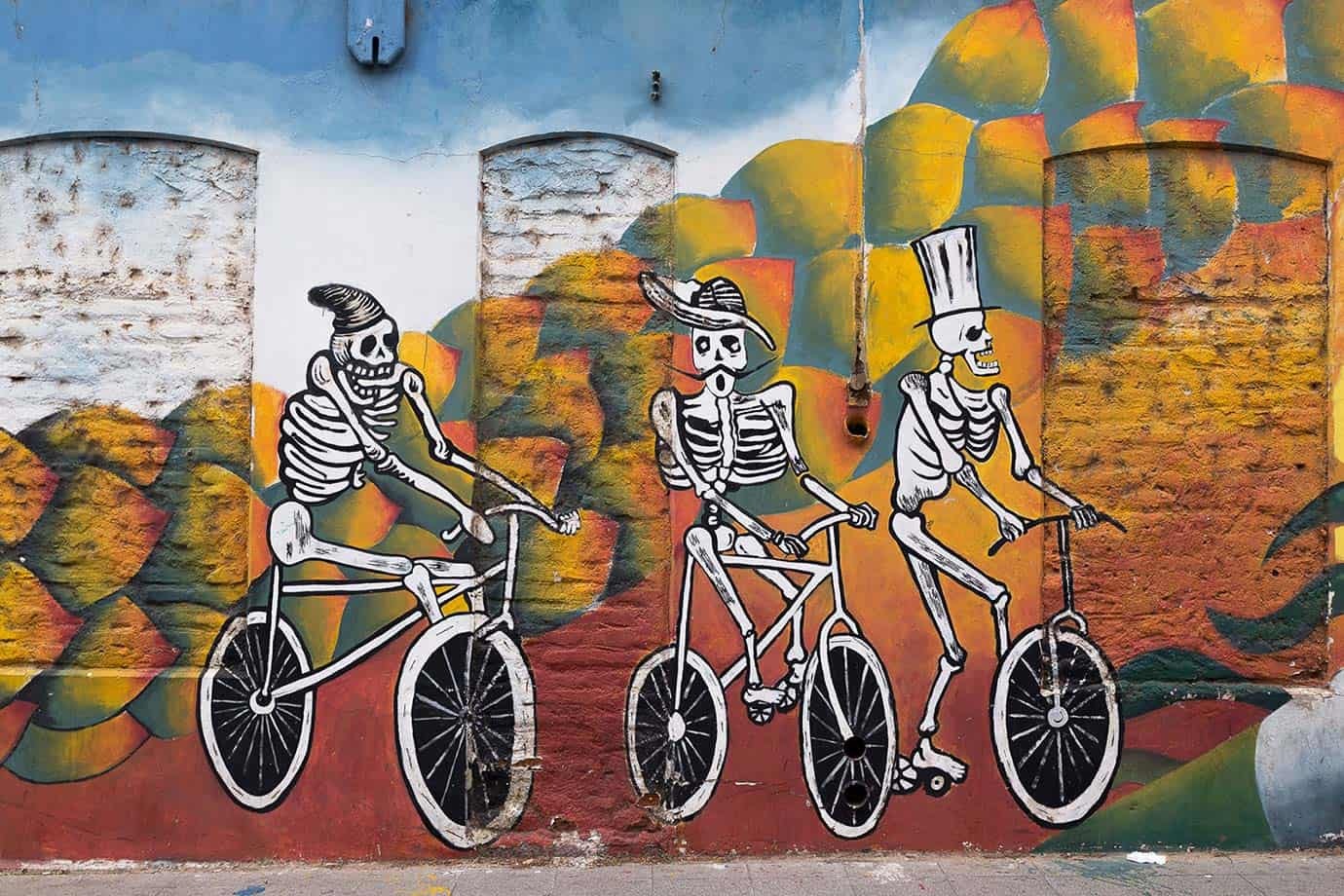 Today depart Chile and cross the mighty Andes into Argentina, Enjoy the spectacular views as you drive through the 28 hairpin turns on the Chilean side. Cross the border.

Once in Argentina, stop at Puente del Inca, a natural bridge over the Río Mendoza. You might be able to see South America’s tallest mountain, Mount Aconcagua, lying in the distance. The landscape continues to fascinate with barren red mountains and dry desert-like plains. Late afternoon arrival in Mendoza, in the heart of the Argentinian wine country. (B,D) 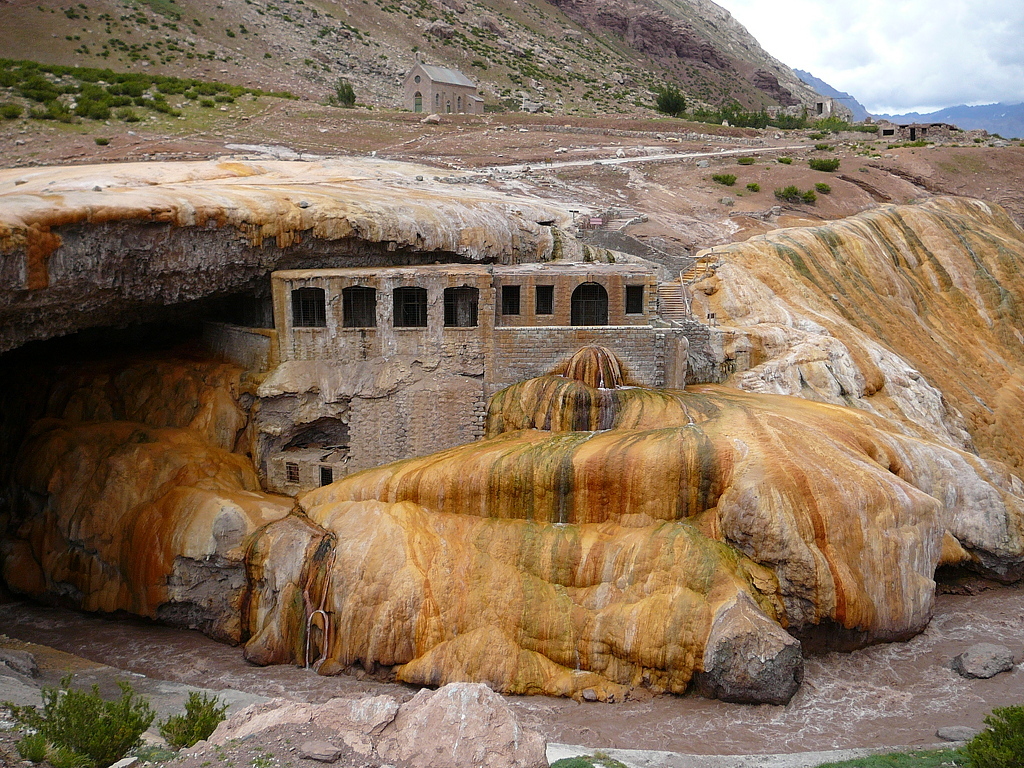 This morning, enjoy a panoramic tour of Mendoza, along its traditional streets and avenues, sheltered by tall and bushy trees. See the Foundational Area, where the city was founded in 1561, Plaza Independencia, the beautiful General San Martín Park and the Cerro de la Gloria Monument for a panoramic view of the city. In the afternoon, head towards the districts of Maipú and Lujan de Cuyo – the home of Malbec. Pass wonderful fruit plantations and vineyards and learn about the irrigation system that gives life to the area, due to the Cipolletti dam. Enjoy wine tastings at two well-known cellars. (B,D) 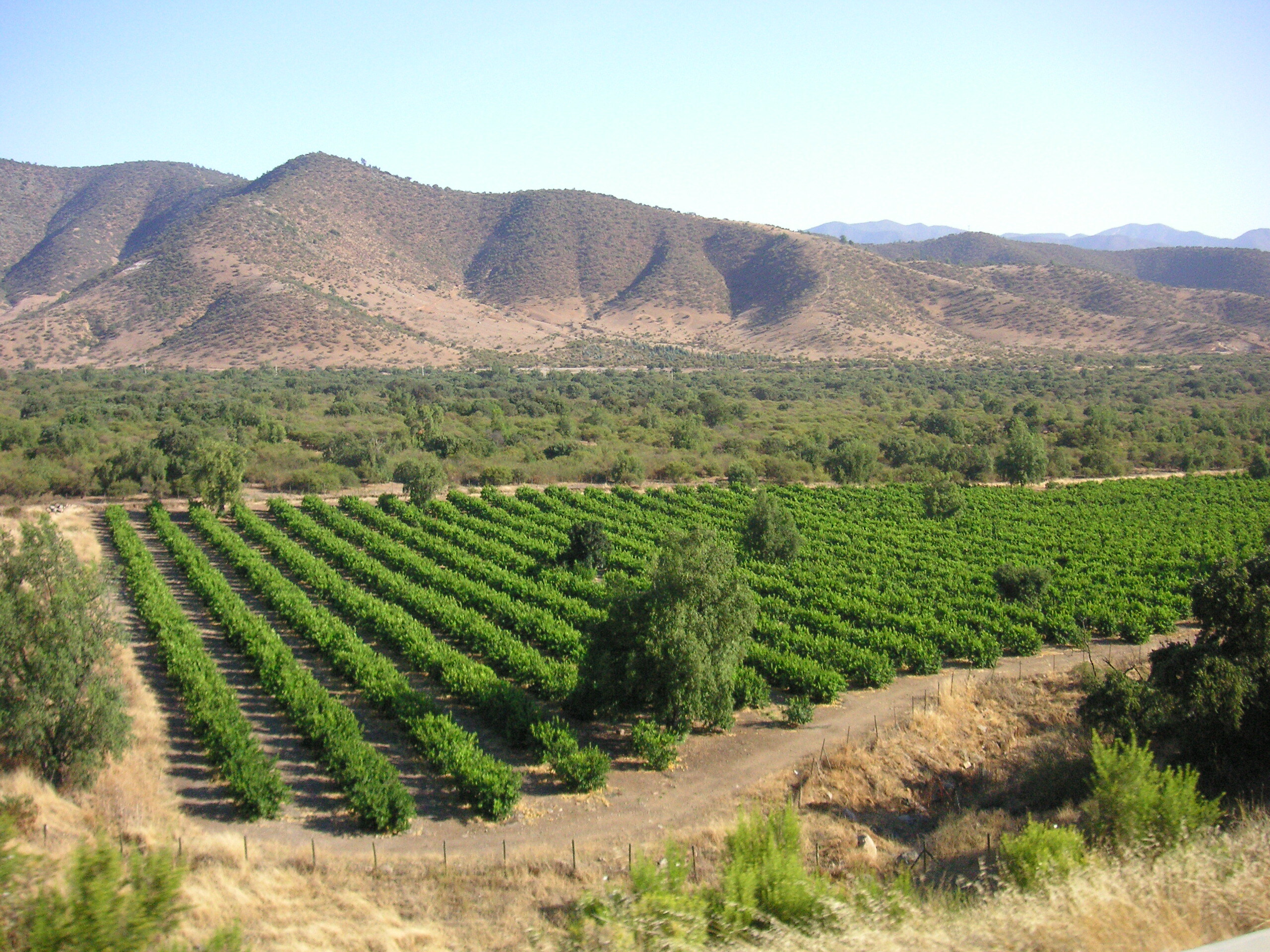 Transfer to the airport for your flight to Buenos Aires, the vibrant Argentinian capital. Transfer to your hotel on arrival. (B,D) 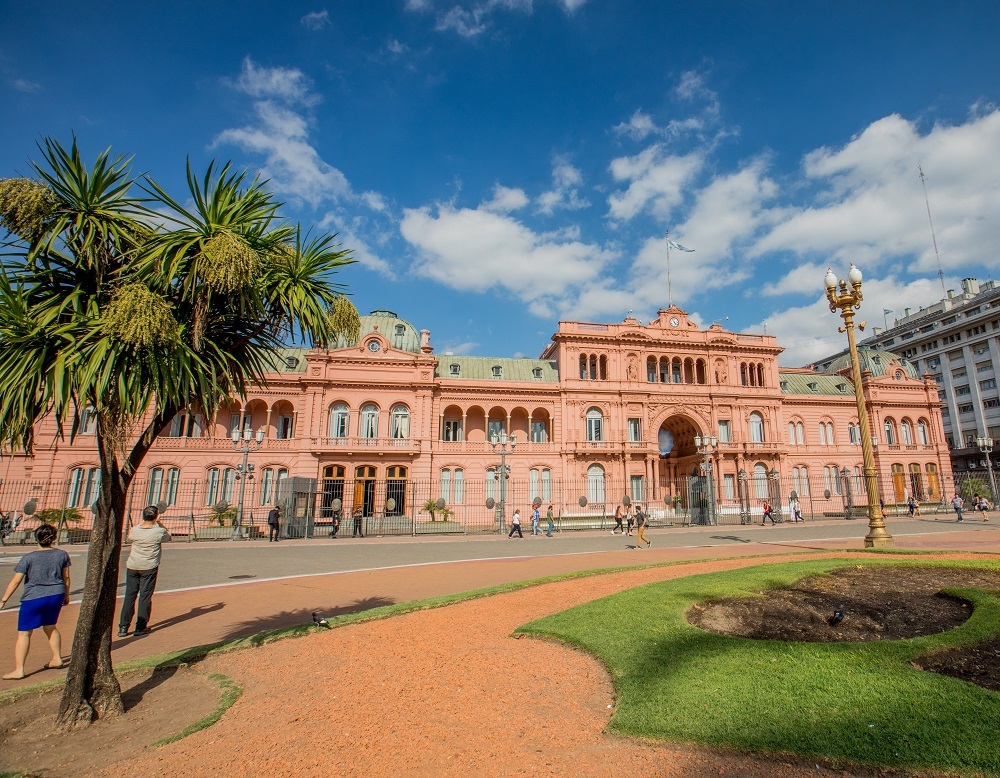 Morning city tour of Buenos Aires – one of the biggest urban concentrations in the Southern Hemisphere. Start at the Plaza de Mayo, surrounded by the Casa Rosada (Government House), the Metropolitan Cathedral and the ancient City Hall, seat of the former Spanish colonial administration. Continue along Avenida de Mayo and cross Avenida 9 de Julio, the widest avenue in the world, modelled after Paris’ Champs Elysées in the 1930s. Drive to San Telmo, the city’s oldest neighbourhood, which has maintained much of its original architecture, with historic mansions, cobbled streets and patios with fountains. Visit the bohemian and colourful neighbourhood of La Boca. Drive past Puerto Madero before heading to one of the most fashionable districts of the city, La Recoleta. Visit its famous cemetery – the resting place of many of Argentina’s wealthiest and most celebrated sons and daughters, including that of Eva Perón.

Afternoon at leisure to further explore the city on your own.

No visit to Buenos Aires is complete without an evening at one of the city’s tango houses. Enjoy dinner and a tango show at La Ventana, a famous restaurant-theatre in a restored tenement. (B,D) 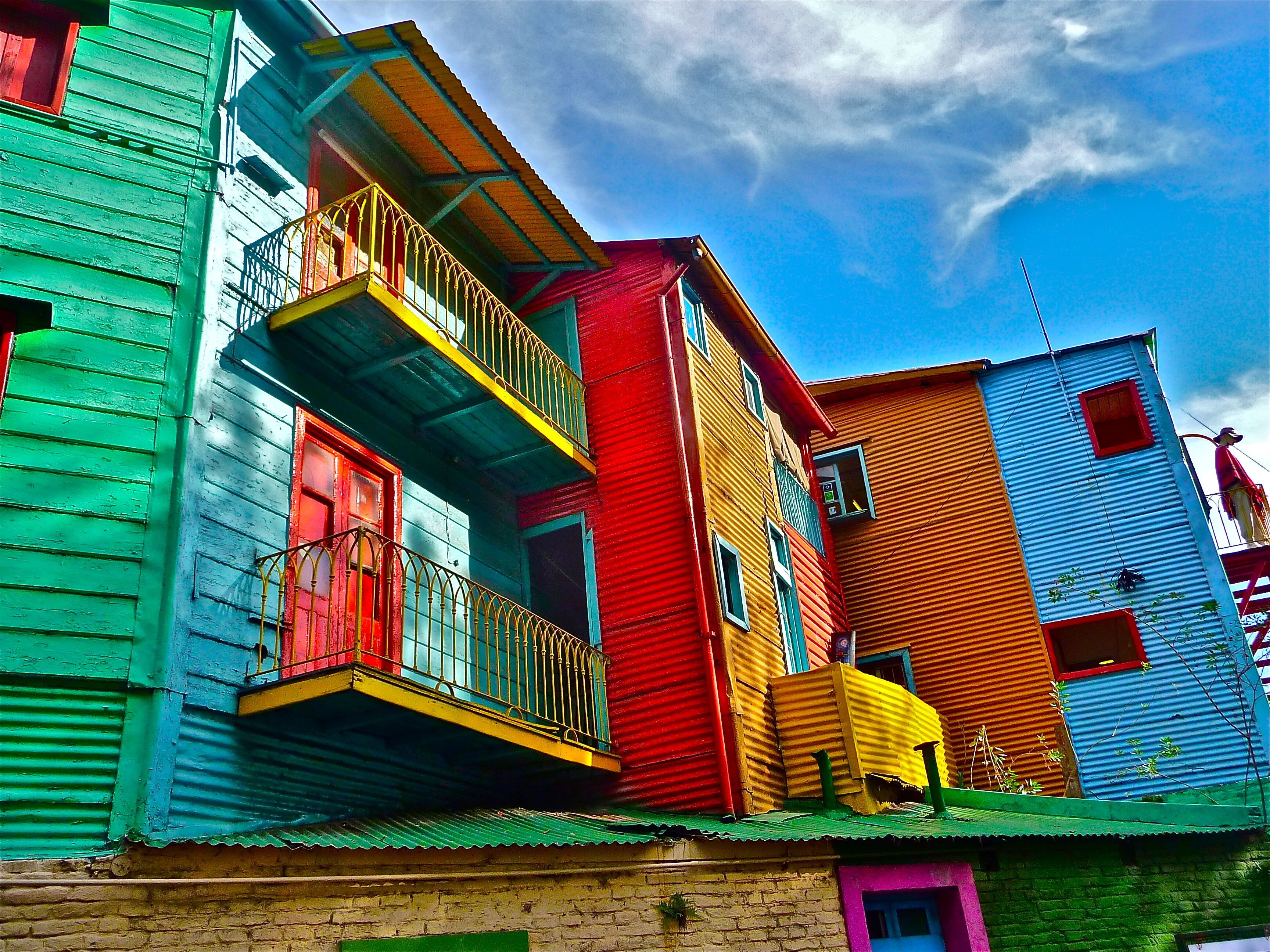 Take a full day excursion to Cardales for a Fiesta Gaucha. Enjoy the scenic drive through the vast flatlands known as the Pampas. At Estancia Santa Susana, explore the grounds of the ranch and enjoy a traditional parrillada (BBQ lunch) while watching a tango and folk show. The real entertainment begins as you watch the gauchos show off their incredible horsemanship skills. Be impressed by a ring race (known as la sortija), animal herding and the cuadreras race – a typical gaucho game. (B,L,D) 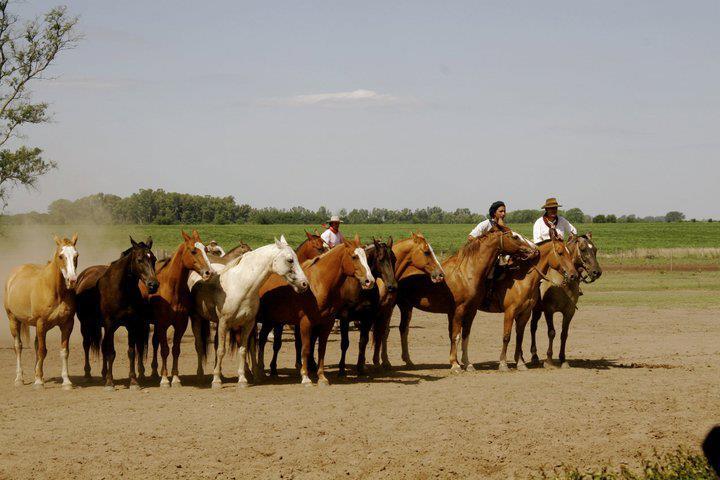 Today, leave the hustle and bustle of the city behind and take a scenic boat ride across the Río de la Plata to Colonia, Uruguay.
Visit its charming historic centre and admire the fascinating architecture of this UNESCO-listed town. See the port, the superb Ferrando Beach and the lovely Rambla that stretches along the coast up to the Plaza de toros Real de San Carlos. (B,D) 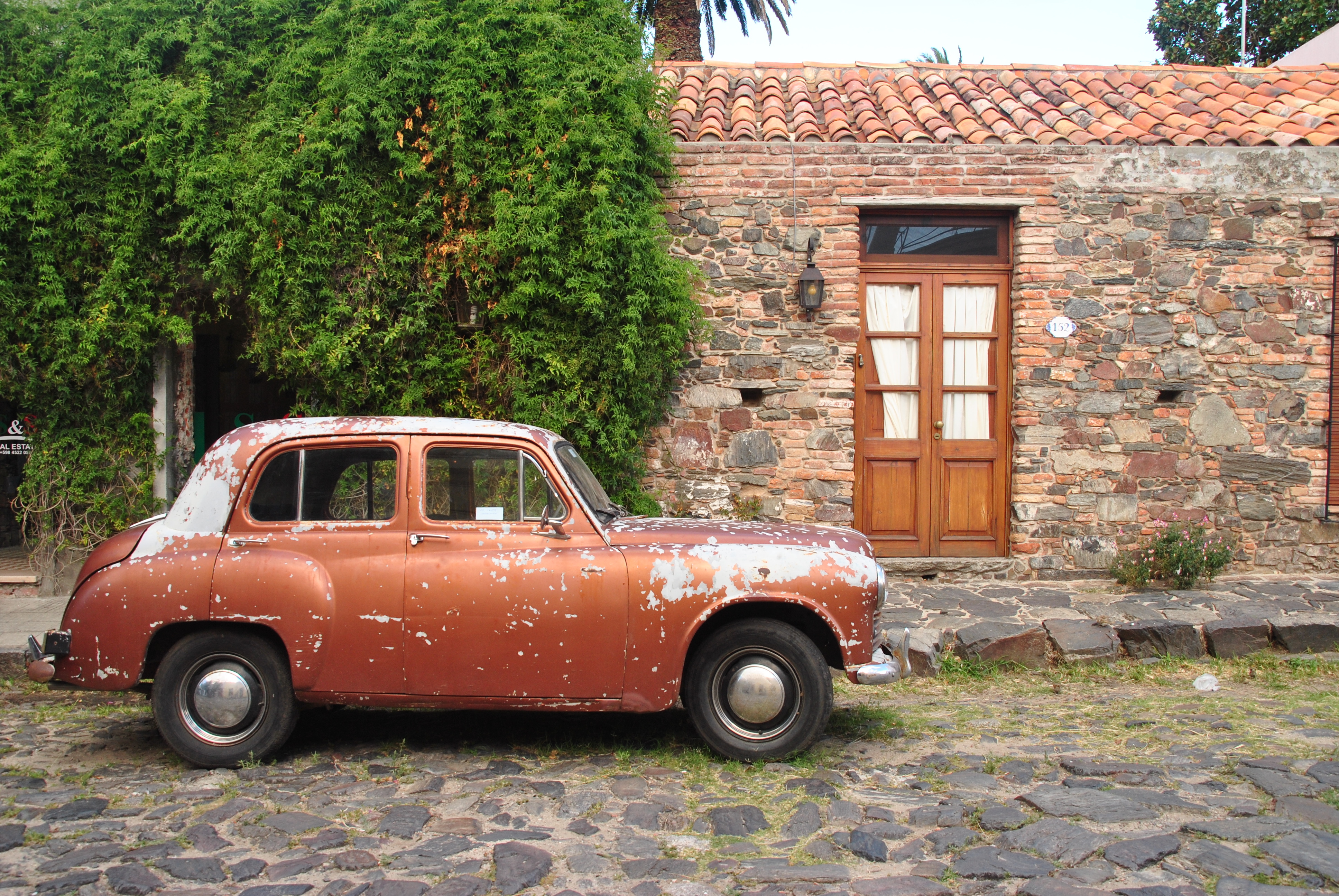 Transfer to the airport for your flight to Iguazu Falls. One of the great natural wonders of the world, the area around the mighty falls has been designated a World Heritage Site by UNESCO. Upon arrival, experience the Argentinian side of Iguazu Falls before crossing the border to your hotel on the Brazilian side. (B,D) 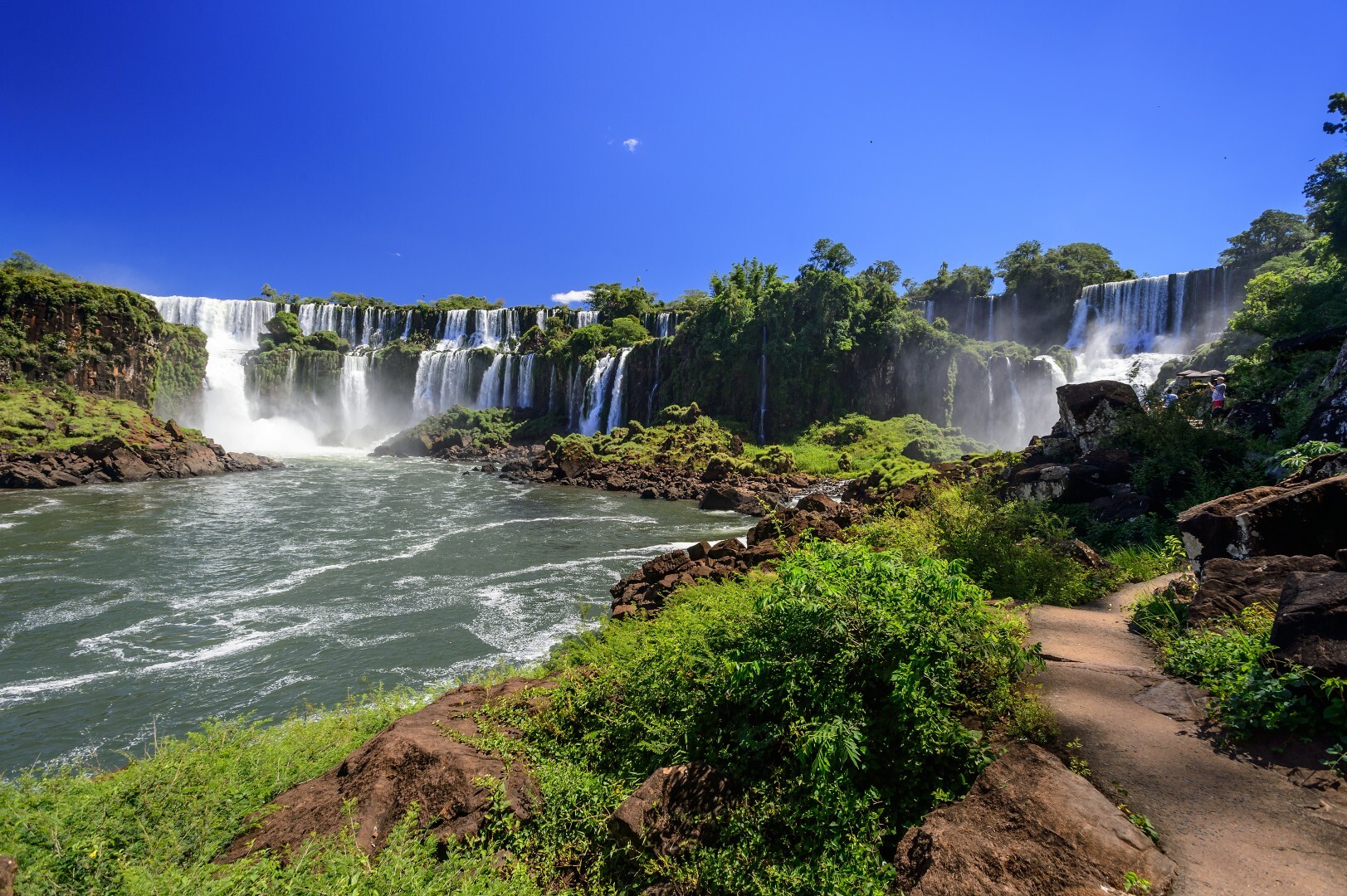 This morning, take a tour of the monumental Itaipu Dam, one of the largest hydroelectric dams in the world across the Paraná River.

After lunch, get a different perspective from the Brazilian side of Iguazu Falls. From virtually every angle, you will enjoy an entire panorama of cascades. Return to your hotel for dinner. (B,L,D) 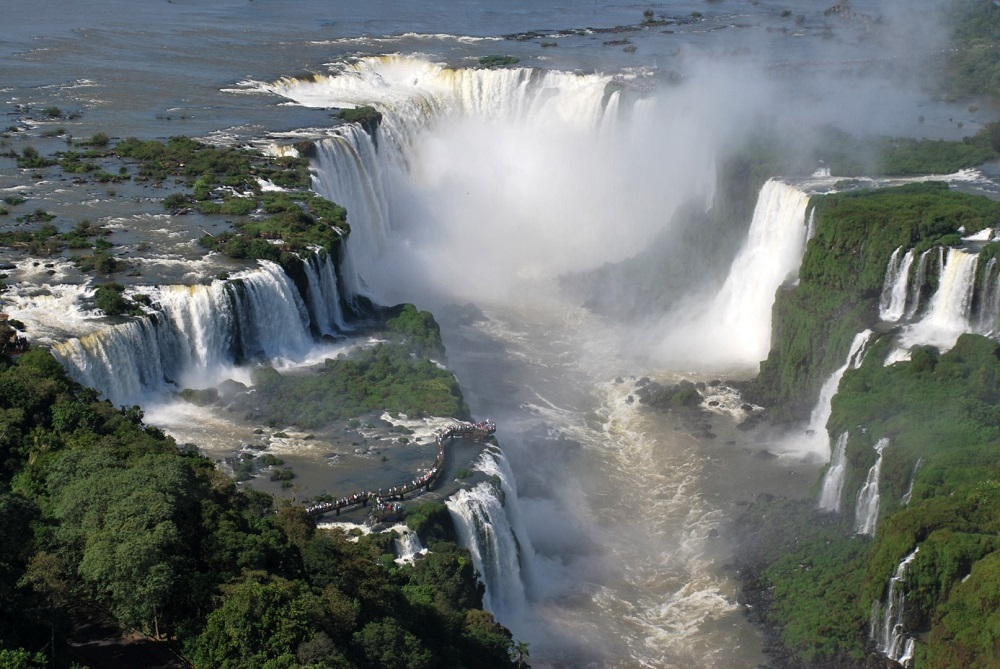 Iguazu Falls from above © Iguazú Argentina®

Transfer to the airport for an early flight to Rio de Janeiro. Locals like to say “God made the world in six days and the seventh, he devoted to Rio”. Start with a panoramic tour of the city including the Maracanã Stadium and the Botanical Garden. Take the cable car up to the top of the impressive Sugar Loaf, 396 metres above sea level, and enjoy the magnificent views of the great beaches and the city, including Niteroi, Copacabana and Santa Cruz Fortress.

Head to your hotel in the afternoon and enjoy the remainder of the day to stroll along Copacabana Beach before dinner at a popular local BBQ restaurant. (B,D) 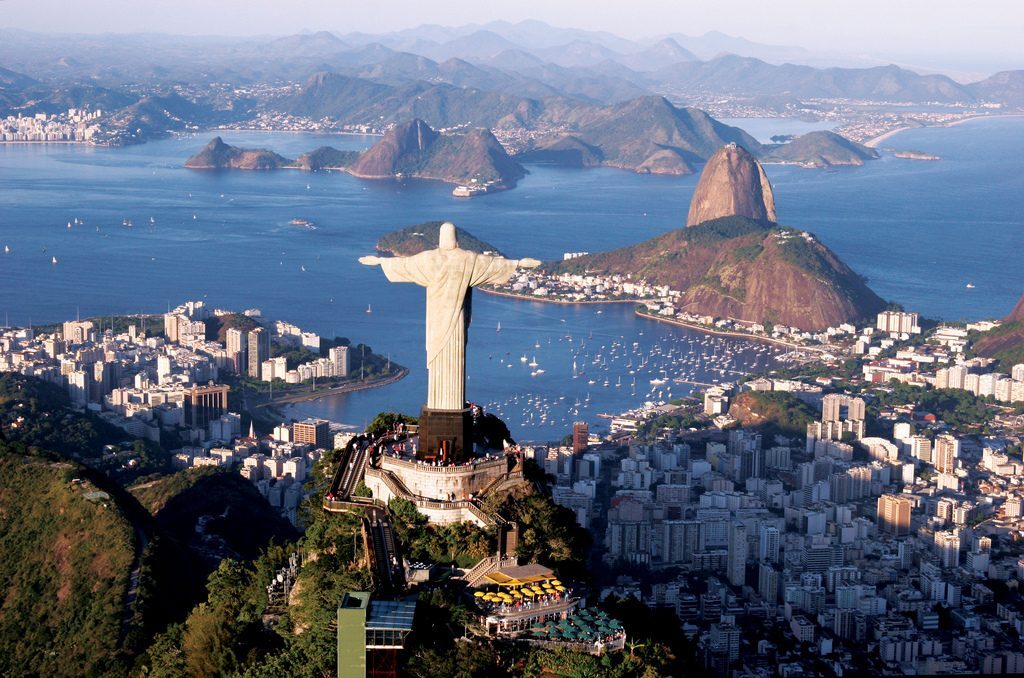 Today travel to some of the exotic tropical islands surrounding Rio by private boat. Don’t forget your swim suit!

Late afternoon return and dinner at the hotel. (B,L,D) 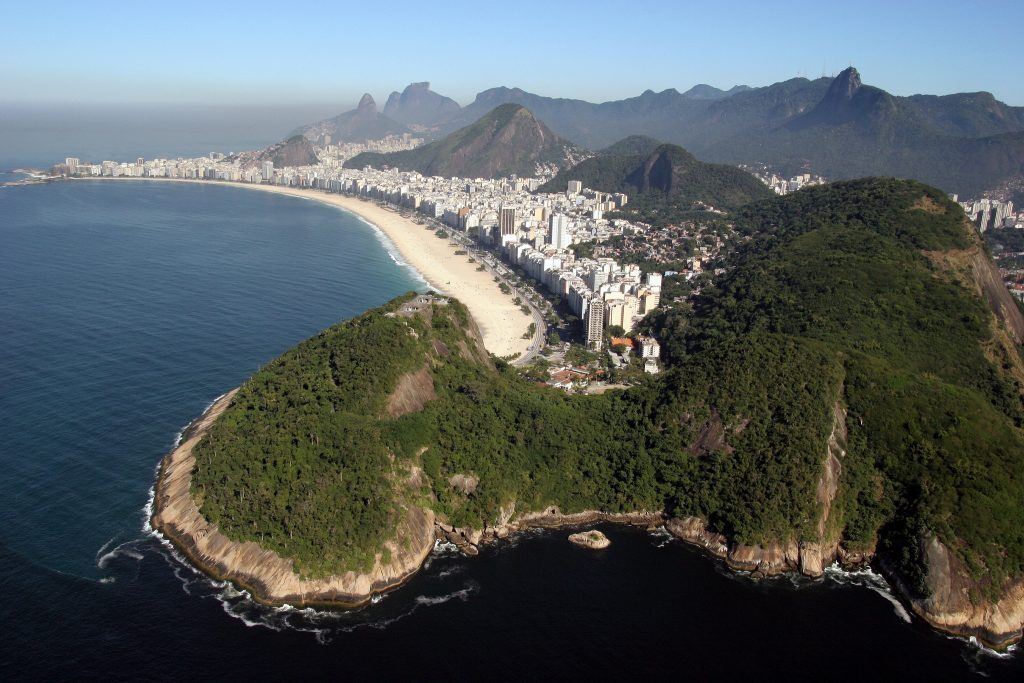 Travel up the Corcovado mountain by jeep and explore the dense greenery of the Tijuca Rainforest, before getting to the iconic statue of Christ the Redeemer, at 700 metres above sea level. Enjoy the breathtaking views of the city below. You will also visit the strikingly modern Metropolitan Cathedral and stop at the new urban development of Porto Maravilha, home of the neo-futuristic Calatrava-designed Museu do Amanhã.

Tonight enjoy a spectacular dinner samba show. Feel the energy of each dance lighting up the night with the rhythms of Brazil. (B,D) 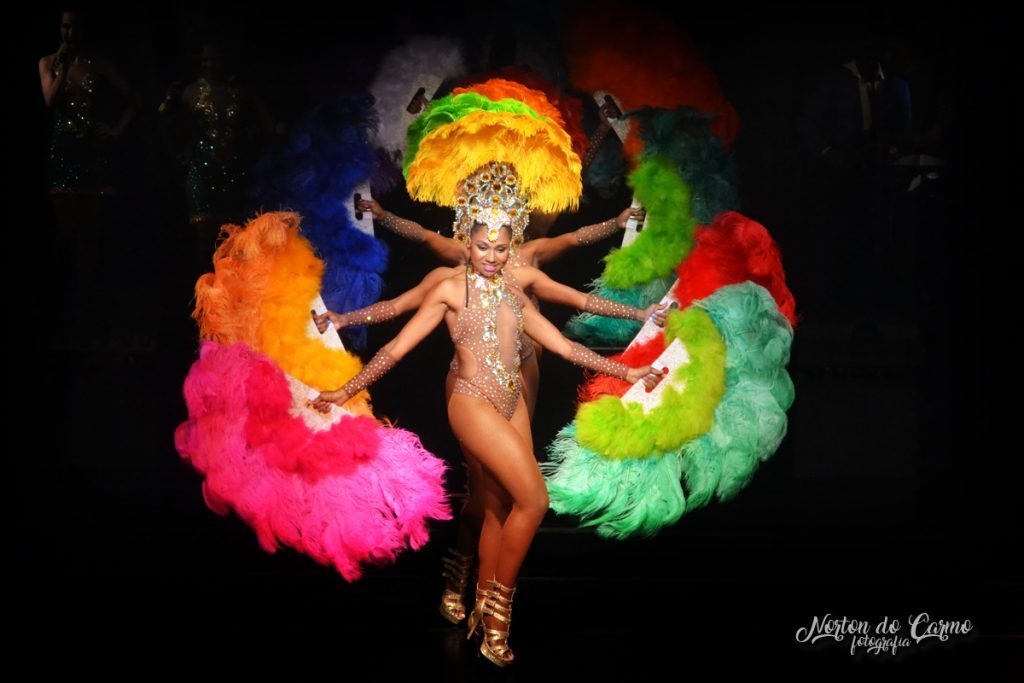 Free morning to enjoy the beach before checking out of the hotel. This afternoon, you will have the option to go shopping for last-minute souvenirs or join your guide for a walking tour of Ipanema Beach, on the ritzy side of Rio.

After dinner, transfer to Rio de Janeiro International Airport for your flight back to Canada. (B,D) 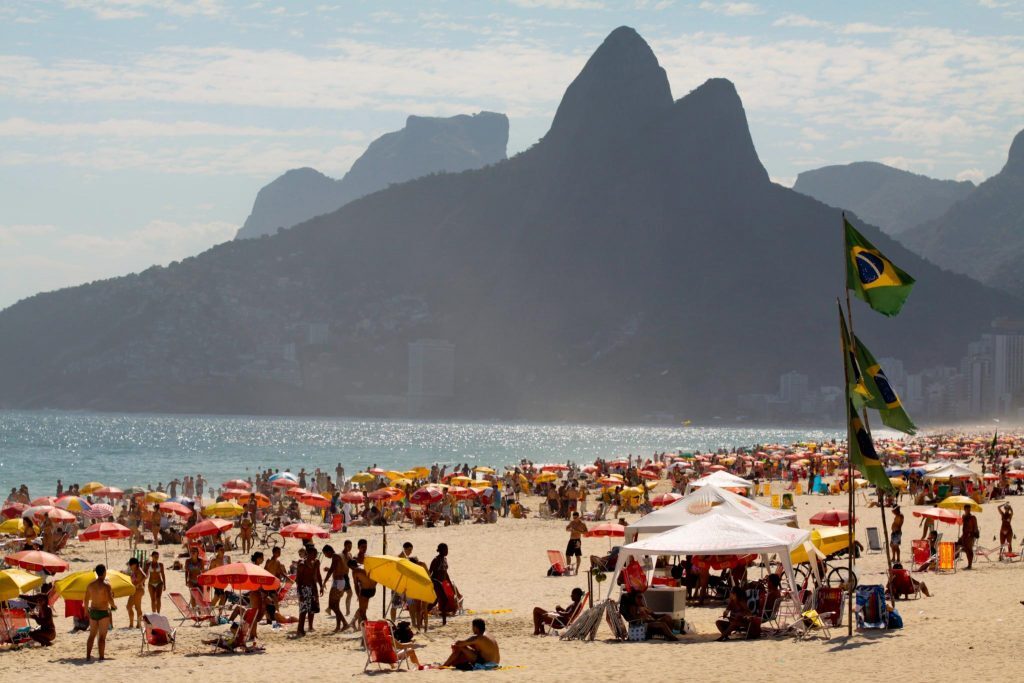