We depart Canada for Egypt.

We are greeted upon arrival at Cairo Airport, transfer to our hotel and relax over dinner. (D)

We set off north through the desert towards the Mediterranean Sea and visit El Alamein Cemetery.
The countryside offers some rare sights and the proximity of the Sahara, the world’s largest hot desert which spans the top of the entire continent, is ever-present. Keep an eye out for the surprising deep rose-tinted salt pans as you near Alexandria.

EL ALAMEIN
The scraggy site of El Alamein holds a fascinating place in modern world history. It was across this parched desert that the Allies first decisive victory in World War II’s North Africa campaign was won. The bloody battles that took place here in October 1942 killed or wounded more than 80,000 soldiers from countries as varied as Australia, New Zealand, India, and Great Britain (Allies) as well as Germany and Italy (Axis Forces). Today, the war memorials that stand are a poignant reminder of the 13-day battle which claimed so many lives.

In the afternoon we proceed to Alexandria, check in and have dinner. (B,D)

The city founded by Alexander the Great is the country’s largest port, famous for its rich Greco-Roman heritage, and its legendary history as the capital during the time of Cleopatra. Today we’ll explore some of its notable sites.

THE CATACOMBS OF KOM EL-SHUAQQFA
Hewn from the rock on southern slopes of a hill in the Carmous district, that Catacombs date from the are exemplary of the Egyptian and Greco-Roman styles so characteristic of ancient Alexandria.

POMPEY’S PILLAR
In the southwest portion of the city, called Carmous, is a hill littered with the remains of ancient walls, architectural fragments, and rubble. Pompey’s Pillar rises from the ruins of the ancient and famous Serapeion (Temple of Serapis), which was once used to store the overflow of manuscripts from the Great Library of Alexandria. This column of red Aswan granite with a Corinthian capital, reaching 27m overall upon a badly damaged substructure, is the only monument from ancient Alexandria still standing. It owes no debt to Pompey however and was raised in AD 292 in honor of Diocletian, who supplied food for the starving population after the siege of the city.

FORT QAITBEY
Walk the long seaside Corniche road heading West, and you’ll finally arrive at Fort Qaitbey. Built in 1480 by Mamluk Sultan Qaitbey to defend the port, the new building employed blocks from the ancient Pharos which had existed on the site. One of the Seven Wonders of the Ancient World, the 300-cubit tall Pharos suffered damage from a major earthquake in 1303, and fully collapsed in 1375. The surrounding waters are now an underwater archaeological park.

We return to our hotel in the afternoon and tonight dine out at a local restaurant. (B,D)

BIBLIOTHECA ALEXANDRINA
A reimagining of Alexandria’s ancient Great Library, this striking cultural center contains one of the modern world’s most ambitious libraries. Its design, that of a giant sun disk inscribed with glyphs, presides over the waterfront Corniche.

Nobody thought much of the ancient rubble mound in central Alexandria until, in 1947, they decided to clear the site to make way for new housing. Instead, the area known as Kom elDikka (“Mound of Rubble”) revealed a swath of ancient ruins including a small Roman theatre.
Enjoy some time at leisure this afternoon to enjoy the city, sea or the local market. Dinner will be at the hotel. (B,D)

We drive to Cairo and upon arrival lunch at a local restaurant. Then we head to the Giza plateau, home to the iconic Pyramids and Sphinx.

THE GREAT PYRAMIDS OF GIZA
The only one of the Seven Wonders of the Ancient World still standing, they are among the world’s most incredible achievements, greatest tourist attractions and dozens of centuries after their construction they still inspire visitors with awe and capture the imagination worldwide.

Then return to the hotel and have dinner. (B,L,D) 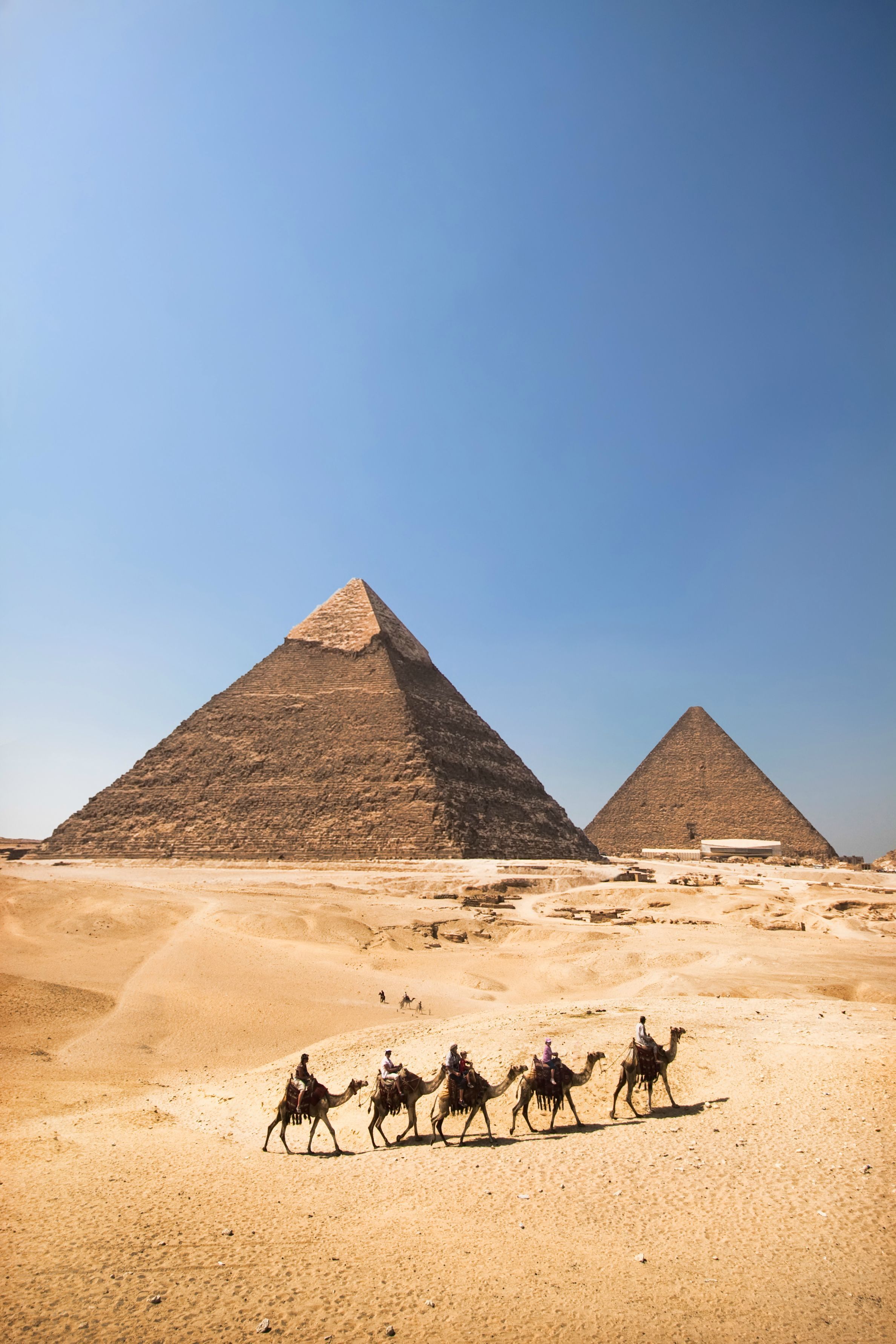 We have a full day to explore this complex and somewhat overwhelming city together. We’ll proceed from the ancient beginnings at the Egyptian Museum, to the Mohamed Ali Mosque and the Citadel of Salah El-Din which fortified the city against Crusaders in the Middle Ages, to the oldest ‘mall’ of Cairo, the Khan El-Khalili Bazaar established in the 14th century as a caravanserai. Experience the many faces and epochs of Cairo today and reflect on the vast history and cultural shifts woven into this modern tapestry as we explore the region further

EGYPTIAN MUSEUM OF ANTIQUITIES:
Our Egyptologist will escort us on a fascinating tour of 7,000 years of Egyptian history with a visit to this magnificent collection. The Museum exhibits over 120,000 objects in its 107 halls, comprising the world’s greatest collection of Ancient Egyptian artifacts. Two grand halls containing countless artifacts and one room reserved for the golden treasures from the tomb of the young king Tutankhamun are a particular draw and delight to visitors. More than 2 million people flock to this incomparable site each year.

Our next stop spans the Middle Ages to the Ottoman Empire (late 12th century to early 19th).

THE CITADEL & MOHAMED ALI MOSQUE
The imposing medieval fortress perched on a hill commanding views over Cairo was founded by Salah El-Din in 1176 to fortify the city against the Crusaders. The Citadel was modified and enlarged over the centuries by subsequent rulers and today is a complex housing four museums and three mosques. Crowning the Citadel is the
elegant Mohamed Ali Mosque, the largest to be built in the first half of the 19th century.
The mosque was built in memory of Tusun Pasha, Muhammad Ali’s oldest son, who died in 1816.

We’ll have lunch at a local restaurant and then explore the fascinating Khan El-Khalili Bazaar, where bargaining for exotic treasures has been the custom for almost 700 years.

KHAN EL-KHALILI BAZAAR
Originally founded as a watering stop for trade caravans in the 14th century, the bazaar has now grown to vast proportions and is reputed to be the largest bazaar in the Middle East. As you wander through the labyrinth
of narrow streets, you will find workshops and stalls selling all manner of things from woodwork, glassware and leather goods to perfumes, fabrics and Pharaonic curiosities.
Remember to bargain hard!

We return to the hotel and then head out for dinner to a local restaurant. (B,L,D)

Now that you’ve experienced the ancient Pyramids, we’ll travel even further back in time as we visit Sakkara and Memphis. We’ll see the vast necropolis of Sakkara and the famous Step Pyramid of King Zoser, the first freestanding stone structure in the world. As the sun faded in the West, the cities of the dead were sited on the West bank of the Nile, so this necropolis forms the middle part of a loose spine of pyramids stretched between Cairo and Mazghuna.
The ancient capital of Memphis was a flourishing metropolis during the time of the Pharaohs. The ancient site is thickly surrounded by lush palm groves and bushes, isolating the old city from the modern. Highlights here include the statue of Ptah, the patron god of Memphis, the massive colossal statue of Ramses II, and an exquisitely carved Alabaster Sphinx.
In the early afternoon, we head to the airport for the flight to Luxor. Upon arrival, we will board our beautiful ship, the H/S NILE VISION or a comparable vessel. (B,D) 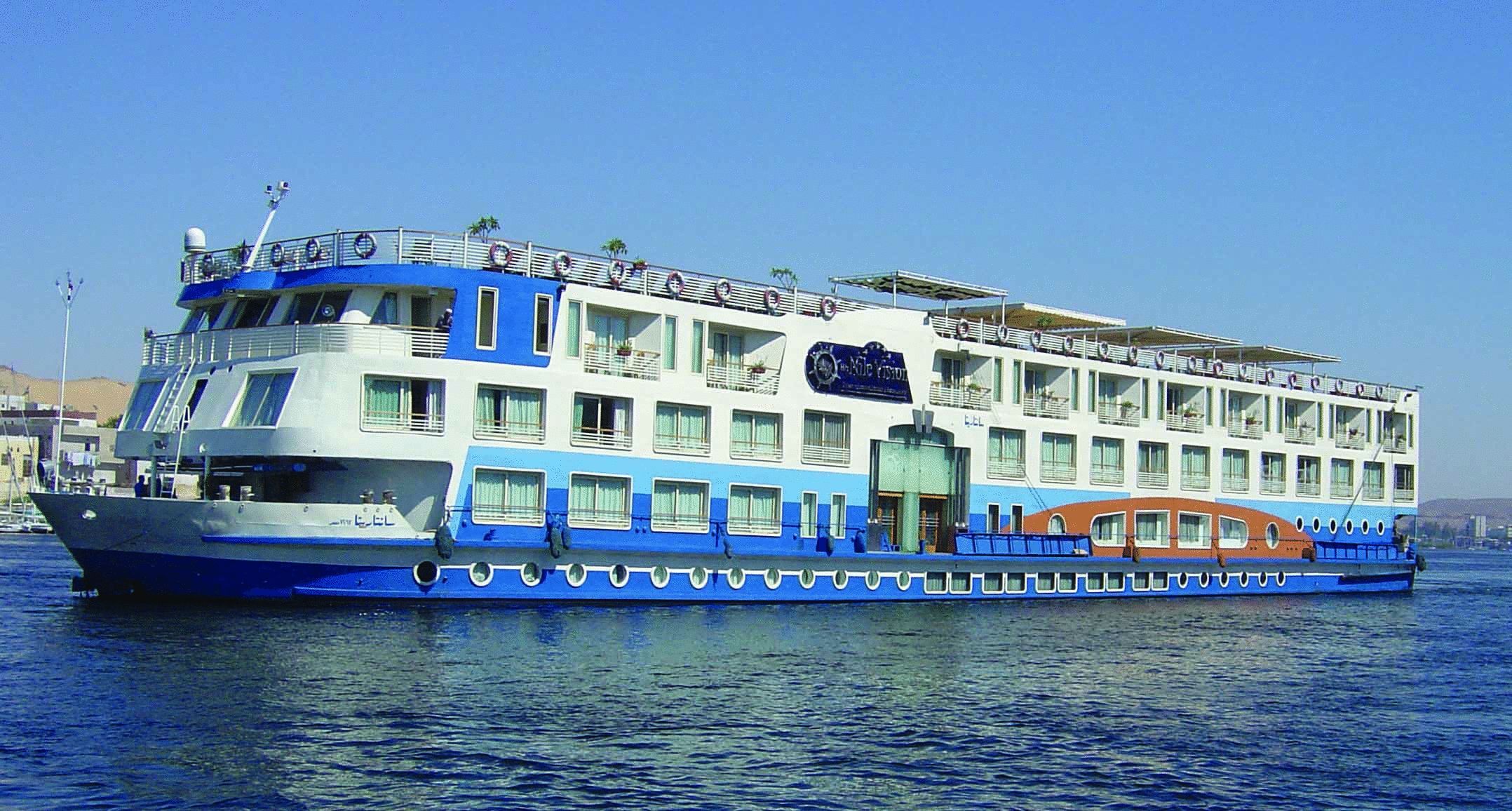 This morning we visit the Valley of the Kings, which extends into a loop of land formed by an ancient oxbow of the Nile.

THE VALLEY OF THE KINGS
We visit Luxor’s West Bank to explore the Valley of the Kings, a vast City of the Dead where magnificent tombs were carved into the rocky desert ridges. For generations, these tombs were ingeniously designed and hidden, richly decorated and filled with all the treasures and necessities a soul might need in the afterlife. They have provided rich
ground for generations of treasure hunters and collectors, but also provided much of what we know about the way of life in ancient Egypt, and in the process fired the imagination of all, from children to Emperors.

We’ll make brief stops for photos at the Temple of Hatshepsut and the Colossi of Memnon.

TEMPLE OF QUEEN HATSHEPSUT & THE COLOSSI OF MEMNON
Emerging from the desert plain in a series of terraces, the Temple of Queen Hatshepsut (Ancient Egypt’s only female Pharaoh) merges with the sheer limestone cliffs that surround it, as if Nature herself had built this extraordinary monument. En route back to the Nile we’ll pass the famed Colossi of Memnon, known for their haunting dawn lament in the time of the Ancient Greeks.

Returning to the ship for lunch, this afternoon we enjoy cruising towards Edfu, where we dock for the night. (B,L,D) 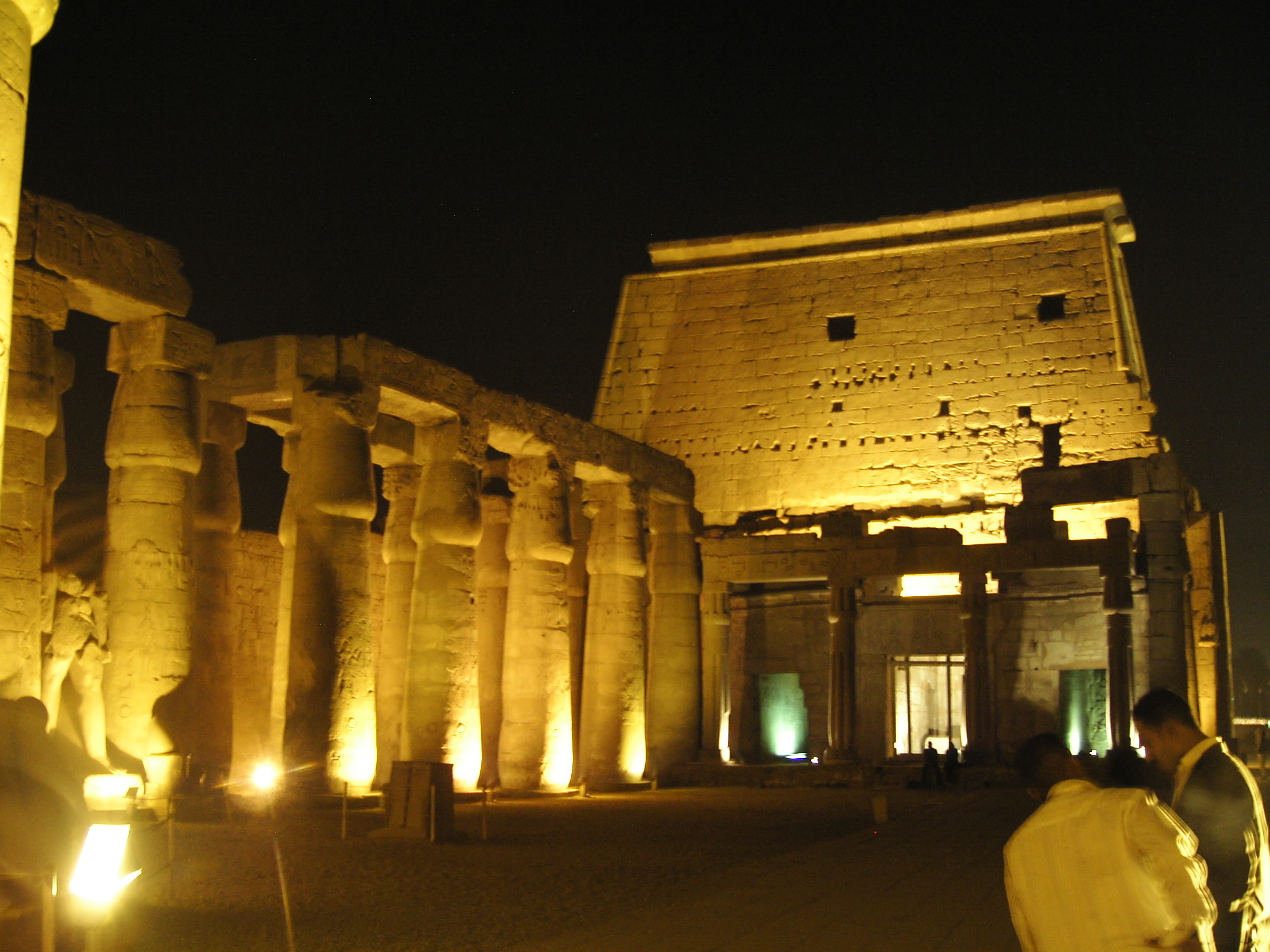 EDFU TEMPLE
Our morning starts with a ride in a caleche, a traditional horse-drawn carriage. A short ride delivers us to the largest and most completely preserved Pharaonic temple in Egypt. This extraordinary temple dedicated to the God Horus was built in the Ptolemaic period.

We then return to the ship and sail past Kom Ombo to Aswan, where we dock for the night. Sit back and enjoy the amenities as we cruise along a river that has been the wellspring to one of the world’s most ancient and ambitious civilizations.
Its banks bear the legacies of kingdoms; remarkable cultural and scientific achievements inspiring generations of archaeologists, writers, artists and adventurers. We are traversing the same waters as Alexander the Great, Cleopatra, Joseph, Moses, Napoleon and countless other figures of history and legend. (B,L,D) 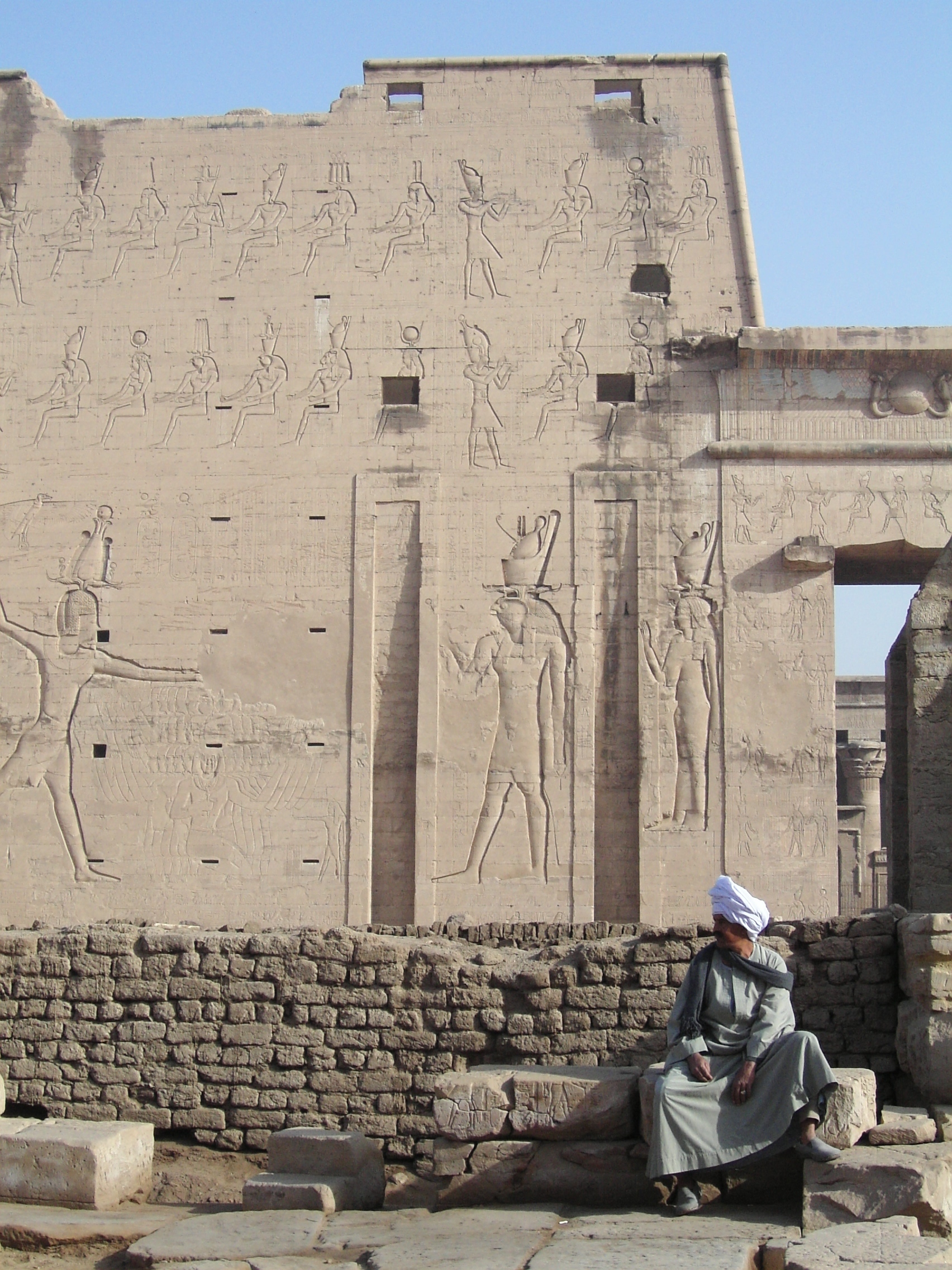 We spend the day immersed in the rich culture and sights of Aswan. We’ll visit the Aswan High Dam, Egypt’s contemporary example of monumental engineering. Then we take a quick motor launch ride to visit the romantic Philae Temple, a gem on the Island of Agilka. After lunch on board we’ll board feluccas (traditional sailboats) for an afternoon tour around Elephantine Island. We return to our ship for dinner. (B,L,D) 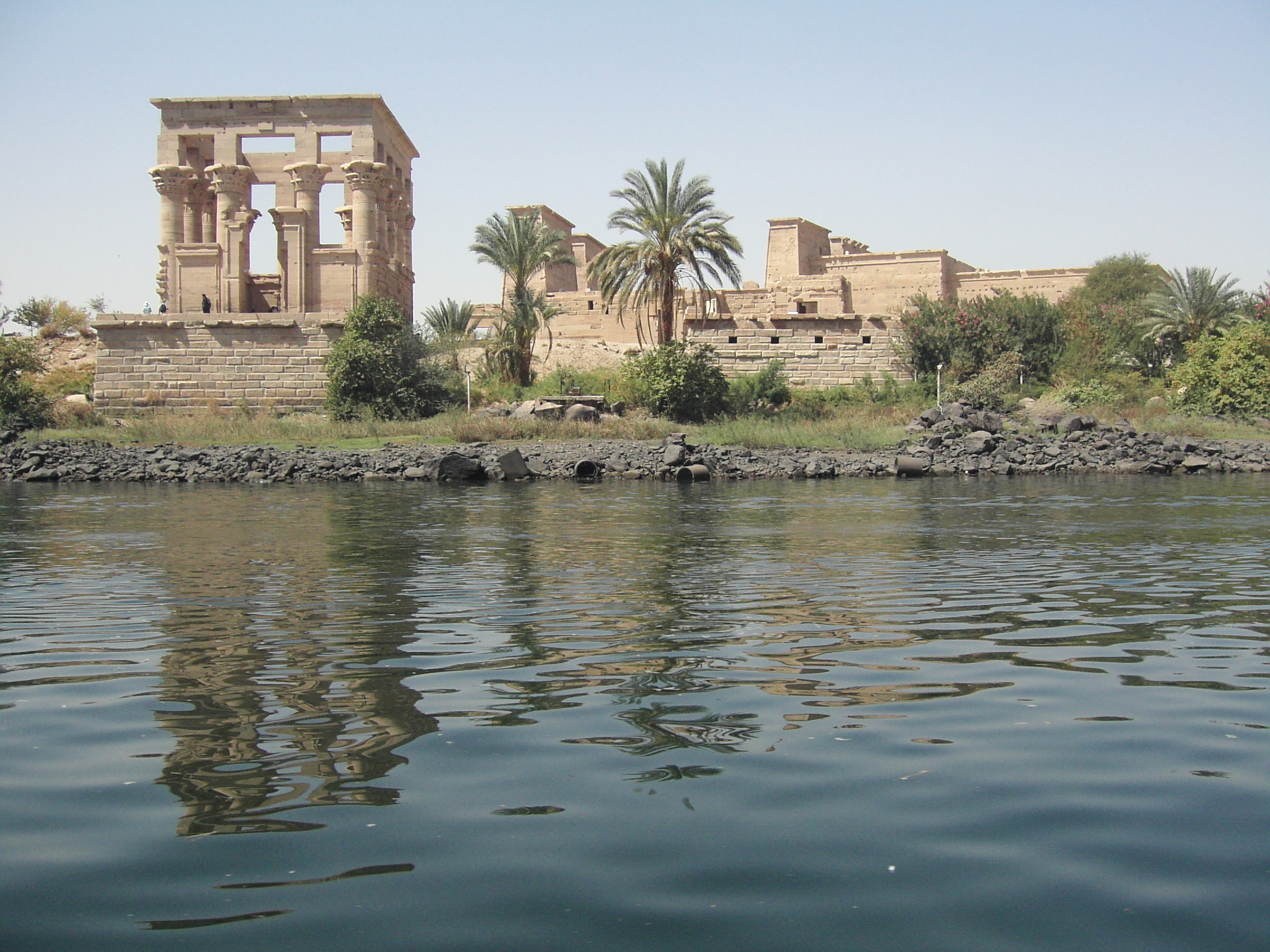 We’ll have an early morning departure to visit this magnificent site further south.

ABU SIMBEL
Both temples of Ramses II at Abu Simbel are fronted by colossal statues up to 20 m high and are regarded as the most impressive Ancient Egyptian monuments remaining.
When threatened by the waters of Lake Nasser due to the planned Aswan High Dam, UNESCO launched a campaign to preserve the monument. The temples were cut into blocks, raised and reassembled in sections to a new site higher up the hillside.

Return to the ship for lunch and then cruise towards our afternoon destination, Kom Ombo.

THE TEMPLE OF KOM OMBO
Dedicated to the crocodile god Sobek, the temple features some beautifully preserved murals and reliefs, some still showing color after dozens of centuries of exposure. The complex is sited at a bend in the Nile where in ancient times sacred crocodiles basked in the sun on the riverbank. 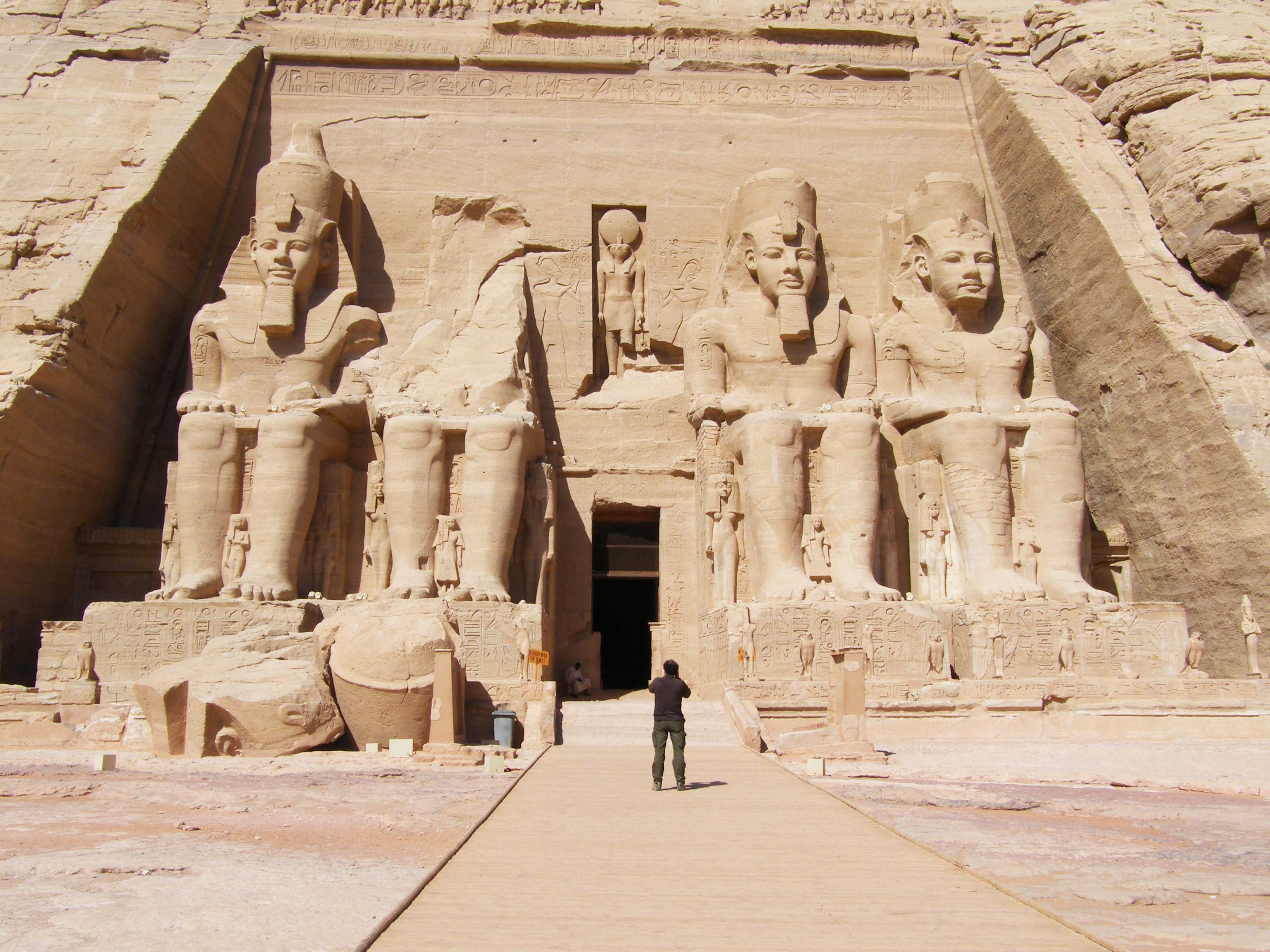 Enjoy a leisurely day of cruising on the historic Nile River, through the Esna lock. The scenery fascinates, from lush vegetation near the shore to red gold sand dunes and brilliant sky. (B,L,D)

LUXOR & KARNAK TEMPLES
Our Egyptologist will guide our exploration of Luxor’s East Bank, starting with the elegant Temple of Luxor dedicated to the god Amun. We then proceed to the tremendous Temple of Karnak, built over more than a thousand years by generations of Pharaohs.
The incredible Hypostyle Hall is a towering forest of 134 massive inscribed columns, covering an area greater than all of Notre Dame Cathedral. 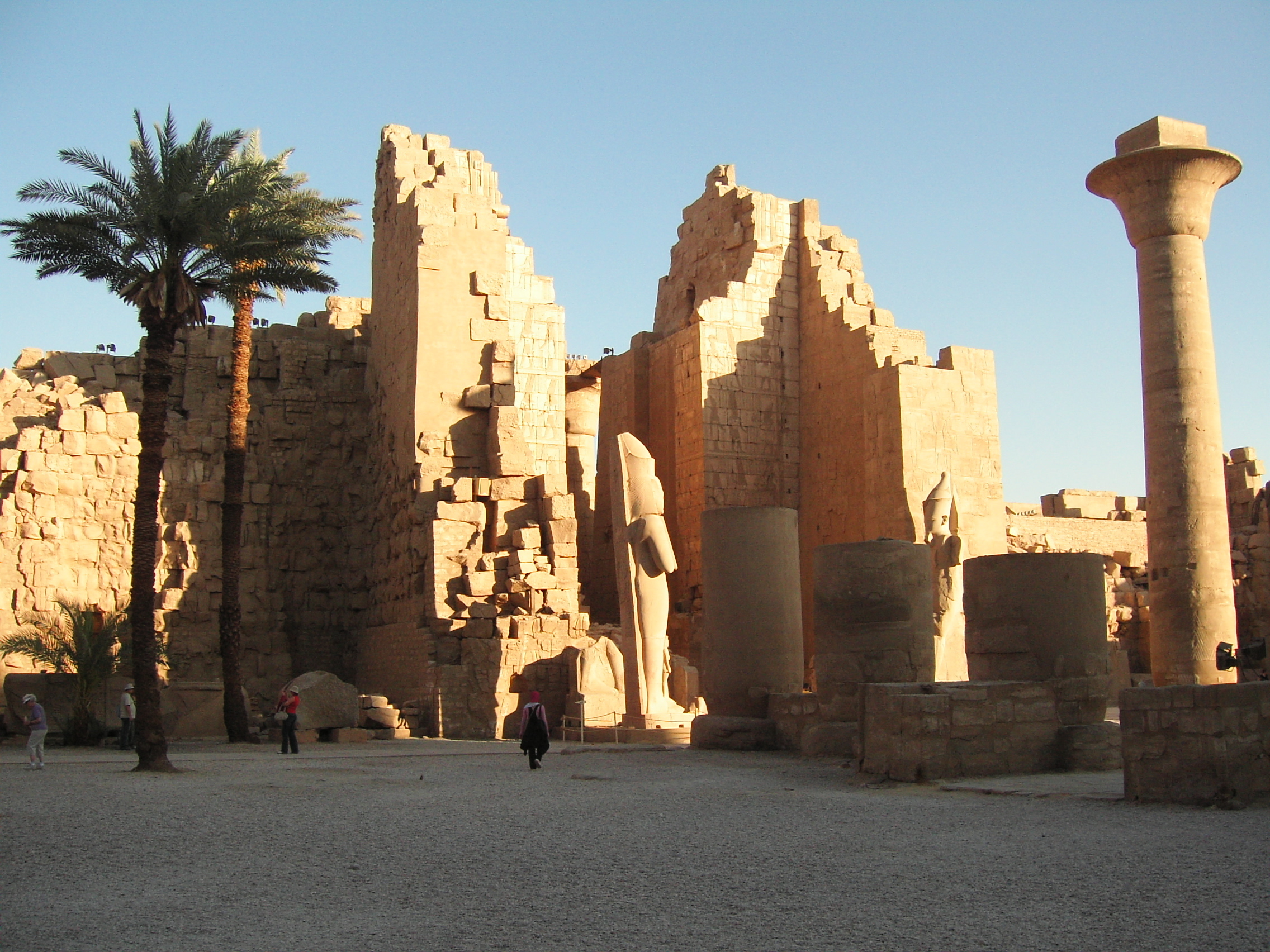 After breakfast, we leave the cruise ship and travel to the airport for the flight to Cairo, where we all transfer to our hotel, enjoy some time at leisure and dine at the hotel. (B,D)

After breakfast, we depart for the airport and fly either home or on to Jordan. (B)