Travel Memories From The STI Team 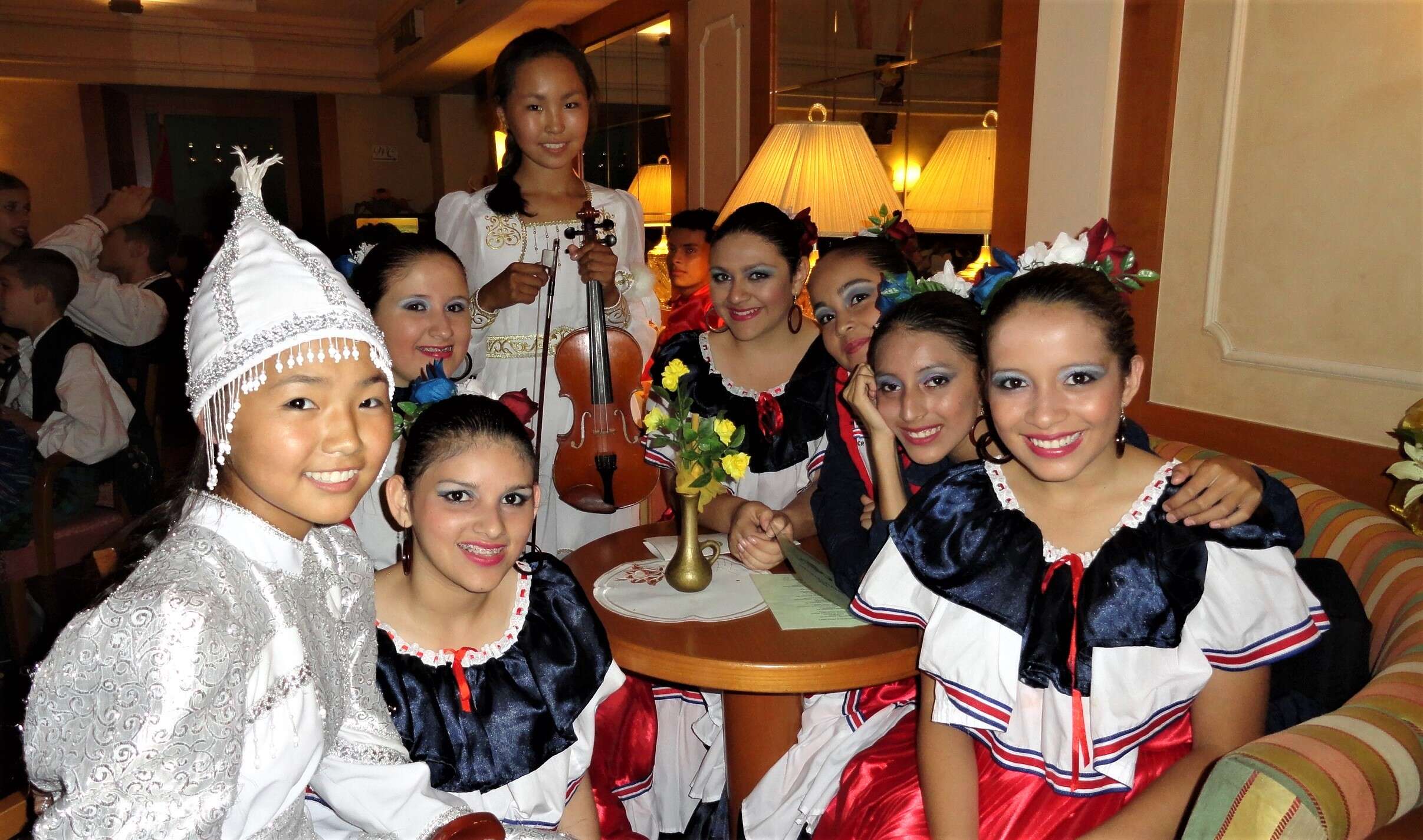 The “painting” that is our life, is made up of many little puzzle pieces. And we all have some “travel pieces” which signify memories of special journeys we have taken. We, at Special Travel, want to share a few of our puzzle pieces with you.
While we await the opportunity to go out there to make new memories on trips around the world, it is wonderful to dig through our memory archives and re-live some journeys, think of special encounters and events that have been the most significant to us on a personal basis.
Pedja: Wild East
Years ago, when I lived in Yugoslavia I worked in Montenegro as a guide, taking a ferry across the beautiful Bay of Kotor almost daily and watching this tiny island from the boat, intrigued, always thinking that I should visit but I never did. 35 years later I returned, rented a boat with my son and for the first time I set foot on this man-made island.
According to legend, the islet “Lady of the Rocks” was made over the centuries by local seamen who kept an ancient oath after finding an icon of the Madonna and Child on a rock in the sea. Upon returning from each successful voyage, they laid a rock in the bay. Over time, the islet gradually emerged from the sea. The custom of throwing rocks into the sea is alive even nowadays. Every year on the sunset of July 22, an event called fašinada in the local dialect takes place, when local residents take their boats and throw rocks into the sea, widening the surface of the island.

Left: Our Lady of the Rocks, Montenegro © Aleksandar Sasa Kordic
Right: Pedja’s son, Kosta, in front of Our Lady of the Rocks, Montenegro
Pedja: Wild West
In July 2019, just months before the world shut down, we made a 7,000 km family road trip through the Wild West. Our first photo stop was in Torrey, Utah by the mustang sculpture in front of The Saddlery Cowboy Bar & Steakhouse. It was a first peek of the stunning scenery to come – the Monument Valley in the Navajo Tribal Park located on the Arizona-Utah state line, Horseshoe Bend, Antelope Canyon – just to name a few.

Left: Sculpture in front of The Saddlery Cowboy Bar & Steakhouse, Torrey
Right: Monument Valley
Albert: Wonju Suspension Bridge, Gangwon province, South Korea
In July 2019, I got the chance to visit Wonju in Gangwon province, South Korea. I took the hop-on hop-off bus (which only operates from April to October) to Wonju Suspension Bridge, a rather amazing sight in the countryside. It was refreshing to see something different after the usual craziness of hectic Metropolitan Seoul.
Gangwon province is the only province that exists in both ROK and DPRK (South and North Korea respectively) and offers beautiful mountain (Mt. Taebaek) and coastline scenery. Wonju is the most populous city in Gangwon province and also the eastern part of Korea. It was the site of three crucial battles during the Korean War (1950-53) and exchanged hands numerous times during the severe fighting. 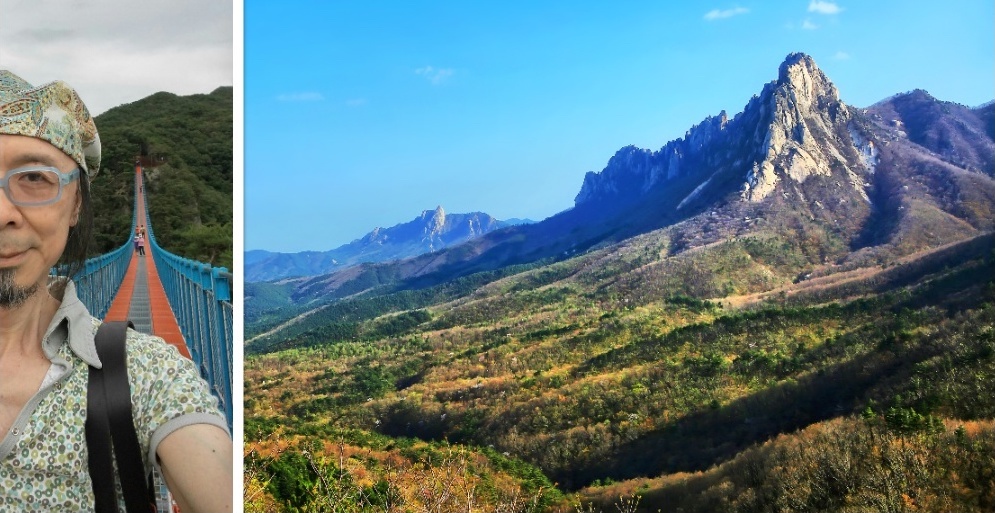 Left: Albert at Wonju Sogeumsan Mountain Suspension Bridge
Right: Seoraksan, Taebaek mountain range
Albert: Encounter with the Dukha people (population 500) and their reindeers (about 3,000), Mongolia
Since visiting Mongolia for the first time in May 2018, I have built up tremendous interest to explore further on this landlocked once an old and mighty kingdom. So, the following summer, in July 2019, I went back and created my own route of interest. Since Mongolia is quite a vast country, I left the usual Gobi Desert route for another time. After a few nights in Ulaanbaatar (one of my favourite cities) I started my adventure to the Northern Khuvsgul region, where the Dukha people live. Since I am not a big fan on flying domestic and I had some time, I booked my local guide and a land cruiser as means of transport. I broke the journey by stopping one night at the amazing Amarbayasgalant Monastery (circa 1727) and continued the following day, reaching my lakeside Mongolian ger (my base camp for 3 nights) at dusk.
Dukha people and their reindeers are scattered around the remote area of Lake Khuvsgul. They don’t usually mingle with tourists, aside from a couple of families. In order to meet them, my guide and I had to charter a speed boat. They usually do some trade (mostly selling their handcrafted artifacts) for a couple of months during the summer, while the reindeers graze in the pasture land leisurely. It was a wonderful experience to learn about this minority who live in such hardship in these modern days.

Left: Dukha people (Tsaatan)
Right: Albert, meeting a local reindeer
Aurelie: Tromso, Norway – the Arctic capital
There is something almost surreal about a city that is plunged in almost total darkness for weeks at a time. My visit to Tromso, Northern Norway, in the middle of winter, left a big impression on me. During the Polar Night, which lasts from November to January, the sun does not rise at all.
One of my goals was to chase after the northern lights; Tromso is surrounded by fjords, mountain peaks and islands, and offers one of the highest probabilities of experiencing them. Although I didn’t quite get the full spectacle of the green lights dancing in the sky, I left with fond memories of the special atmosphere of this polar city, which feels isolated yet lively, freezing cold yet warm and cozy in its lovely cafes. There is also something about going dog-sledding in temperatures of minus 16, in the middle of the night... I mean, 7 pm.

Left: View from Mount Storsteinen, accessible by cable car
Right: Tromso city centre
Aurelie: Kangaroo Island, Australia
While living in Australia, one of my favourite destinations was Kangaroo Island, 13 km off the coast of South Australia. My love of food is no secret and the local produce there is outstanding – seafood (marron, abalone), highly prized Ligurian honey, cheese and wine, to name a few. The landscapes were varied with a beautiful coastline, bushland and strange rock formations. The wildlife was simply incredible; I spent whole mornings observing colonies of sea lions on the beach, and most evenings I joined dozens of kangaroos and wallabies in watching the sunset.
The 2019-20 summer bushfires that ravaged much of Australia were also the largest in Kangaroo Island's recorded history, with nearly half the island hit hard by flames. Luckily, the bush is springing back fast and vigorously. The animals suffered a lot from injury and loss of habitat, but reports are rolling in of flourishing fauna and animals enthusiastically rebounding. Black cockatoos' fledglings have been spotted earlier this year, pygmy possums were recently discovered in the Flinders Chase National Park for the first time since the fires, and birdlife has started to return.

Left: Kangaroos in Stokes Bay, on the north coast of Kangaroo Island
Right: Driving around Kangaroo Island
Gery: Children Folk Dance Festival, Southern Austria
What a great event! The organizers invite children/youth folk dance groups from around the world to come to Carinthia, Southern Austria and share their dances with other groups and local spectators in different villages and towns. All costs for the week are covered by the local organizers. Groups from as far away as South Africa, Yakutia, Russia, Mexico and of course many European countries answer the call each year.
Getting to know cultures from around the world is being promoted in the best possible way through workshops and fun events amongst the groups during that week. I had the chance to volunteer as translator for Spanish-speaking visiting groups from Costa Rica and Catalonia, Spain some years ago. We stayed in touch and I managed to visit them in their home countries, cementing a friendship that continues on.

Left: Young ladies from Catalonia, Spain and local Austrian dancers getting ready for their performance
Right: Yakutia smiles
Gery: Golf and wildlife in Kenya and South Africa
It can be looked at as decadent – safaris and golf in countries where the locals are struggling to make a living. But one can also contribute to the economies of a few while being right there. Experiencing the incredible wildlife of Africa is certainly an amazing opportunity and spending time with the locals, learning about their plea and being kind and generous while meeting them might just be a drop in the ocean but it can help change the life of a few who in turn can help a few others.
While walking with a caddy on an exotic but not very busy golf course in Mombasa, I could learn about his life, and how he has to try and make a living, caddying twice a month and hearing how his caddy buddy got bit by a black mamba, hunting down a ball in the rough. We shared food and a beer after the round and I had the opportunity to invite him to play with me the next day and have a competition. Maybe just a drop in the ocean but we both felt good that day.