Topics of Interest for Travellers in 2022

THE OBERAMMERGAU PASSION PLAY
The long wait is over for all actors and actresses of the 2022 Passion Play who finally commenced rehearsals on January 6. Director Christian Stückl invited 111 speaking parts to attend the first reading rehearsal. “Everyone joins in, no matter how small their part. It’s the only time all the actors get to hear the play together as a unit”, Stückl explains.
The Hair and Beard Decree has been in force since February 2021. The Passion Play performers have been allowing their hair to grow out ever since, which for the males means also growing their beards. 1,554 Oberammergauers have agreed to join in the 2022 Passion Play. Plus approximately 500 children. This means that around 2,100 performers spanning all generations will be on stage. Since the 17th century, the Passion Play has been carried out exclusively by the citizens of the village. Participants have to be either native Oberammergauers or long-time residents for over 20 years.
The choir and orchestra are well along in their preparations and done with their new pre-auditions. “We want our young people who, two years later, are now in their prime to have a fair chance”, musical director Markus Zwink comments. Musical rehearsals have been underway since November. The rehearsal schedule is tight. “Our young singers are amateurs who require some familiarizing with the Passion Play music; they will be expected to perform nearly an hour and a half of choral music by heart, and with confidence. This requires a considerable amount of advance preparation for each chorister”, Zwink says.
Not to forget the hive of activity backstage. Both the workshops and the tailor shop have been abuzz and working at full throttle since November. Getting ready for the Play is the name of the game. 'The set changes have to be quick, which is why we are currently rehearsing them one after the other. We now have a bit more leisure implementing the technical complexities for set-up and dismantling than would have been possible in 2020”, according to Stefan Hageneier, stage and costume designer for the Oberammergau Passion Play. “All costumes are currently being fitted, finished, and made ready for virtually daily use on stage'. Some 1,500 costumes were hand-crafted in the Passion Play Theatre.
Since 1634, the Passion Play has been performed in Oberammergau once every decade. The Play goes back to a vow made by the villagers in 1633 in their desperate effort to free their village from the plague.
2022 will see the 42nd season of the Oberammergau Passion Play. The Play is scheduled to premiere on May 14, 2022, and the final performance will take place on October 2, 2022. 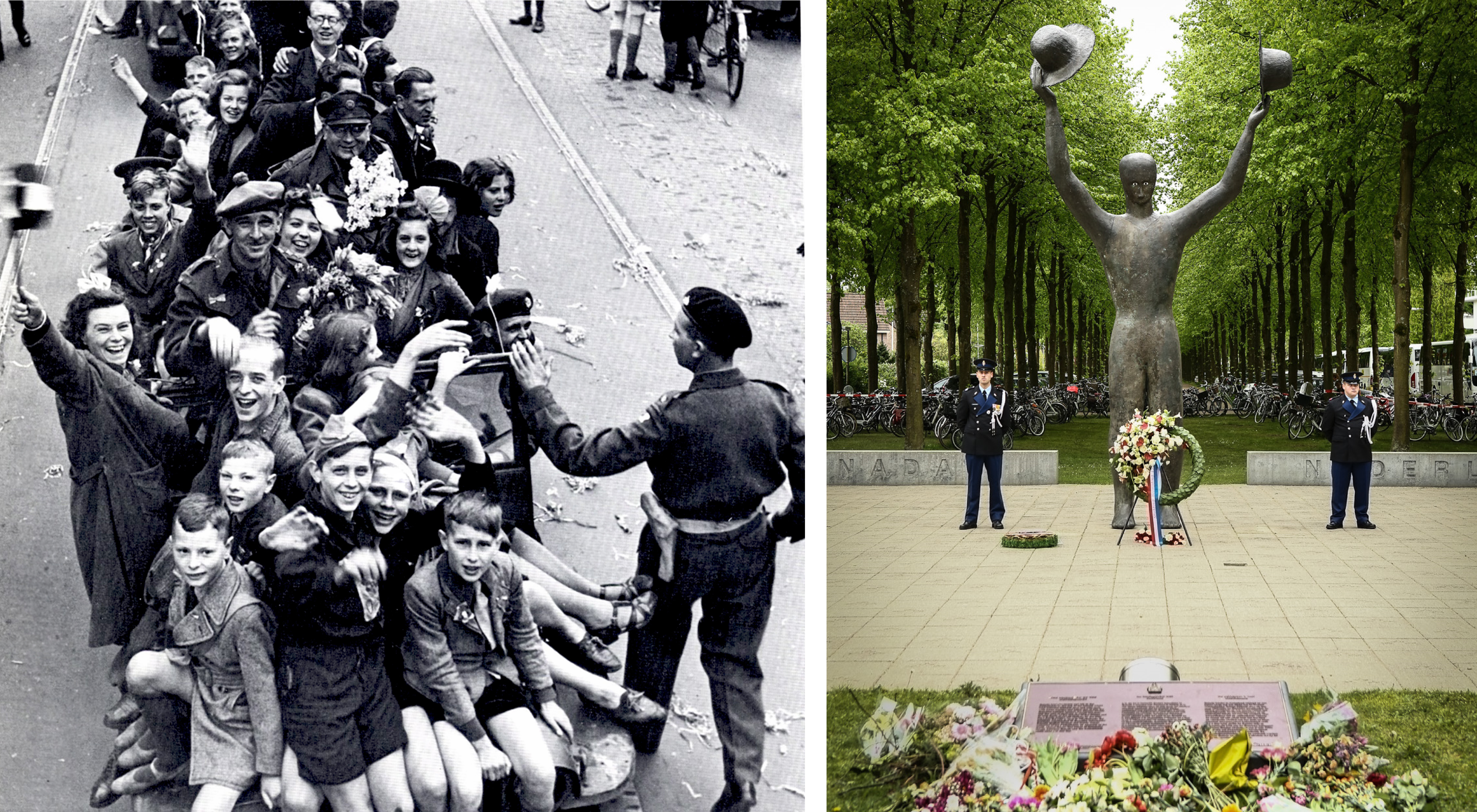 Liberation of Holland © VND | The Man with Two Hats monument, Apeldoorn © Tylerweatherill
VISITING HOLLAND’S SITES OF IMPORTANCE FOR CANADIANS
Canada played a key role in the Liberation of Holland, from the southwest – the setting of the crucial battle of the Scheldt – to the northeast, where the battles of Groningen and Delfzijl took place.
More than 160,000 Canadian soldiers, sailors and airmen fought to free the Netherlands from Nazi occupation between early September 1944 and May 5, 1945 – the day Germany surrendered to Canadians and Allied forces. The two nations have had a warm relationship ever since; Holland hosts annual remembrance ceremonies for the thousands of Canadian soldiers that gave their lives for freedom in Holland, and the wartime graves of 7,600 Canadians who died liberating the Netherlands are tended by Dutch students to this day.
Paying tribute to the fallen Canadian liberators in the war cemeteries in Bergen op Zoom, Groesbeek and Holten is a poignant experience, and some of the war memorials and museums provide insight into the battles and stories of individuals.
The town of Groningen created a living monument to the Canadian liberators of Holland – a forest of some 30,000 maple trees. The city of Apeldoorn is home to ‘The Man with Two Hats’ – the national Canadian monument. In each hand, the statue holds a hat, symbolizing the duality of war and peace, oppression and freedom, death and life, joy and sadness. An identical statue is located in Ottawa, expressing the bond between Canada and Holland. In fact, since 1953, the Canadian city has held an annual Tulip Festival as a way to remember those who lost their lives in the war, as well as to celebrate the Dutch Princess Juliana’s gift of 100,000 tulip bulbs to Canada for its role in liberating the country and providing refuge for her family.
2020 marked the 75th anniversary of the Liberation of Holland. Because of the worldwide health crisis, commemorative ceremonies in Holland were not hosted as planned, but Canadians still found creative ways to mark this important day, by sending virtual messages of gratitude to veterans and sharing photos of tulips on social media.
After a couple of chaotic years in terms of international travel, spring 2022 is showing good potential for those who have been wishing to pay respect to our fallen soldiers who died in Holland in service of peace.
Joining a remembrance tour is a way to walk in the footsteps of our soldiers who left their mark of service and sacrifice in the cause of freedom, and give thanks to the Canadian veterans committed to defending peace and freedom around the world. A tour of the battlefields, war cemeteries, memorials and museums is a profound experience – both illuminating and deeply moving. It is an opportunity to engage with the past, and a promise to make the world of the future one where such hardship and devastation are never repeated. 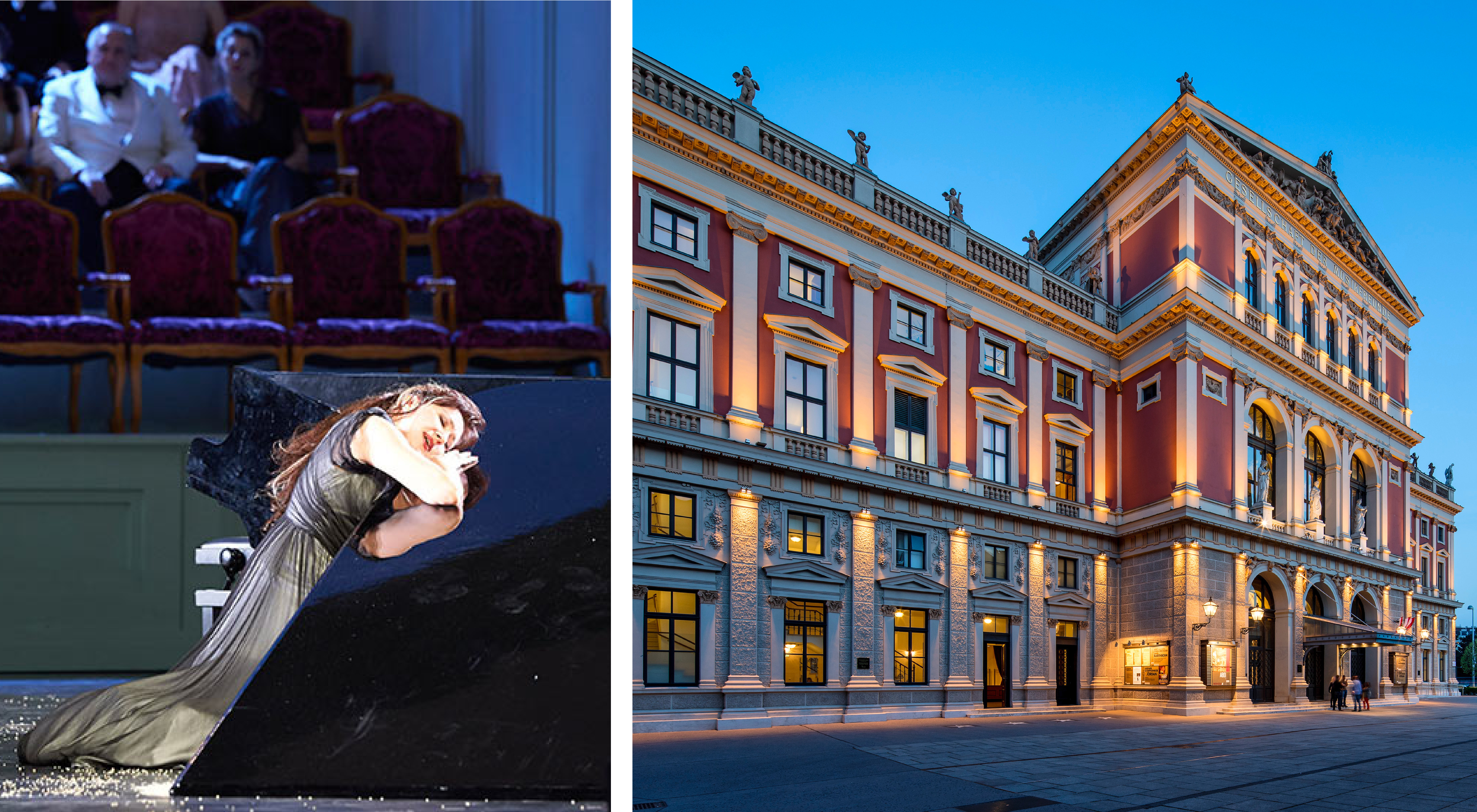 Krassimira Stoyanova in Ariadne auf Naxos © Michael Poehn | Musikverein, Vienna © Christian Stemper, WienTourismus
CLASSICAL MUSIC EVENTS IN FULL PLANNING IN EUROPE
In 2020, musicians responded rapidly to governments’ social distancing restrictions by providing streamed concerts, providing a sense of connection during the uncertain and challenging times. Many Canadians otherwise used to travelling to Europe to hear the finest classical music have had to content themselves with online concerts in the past two years.
As annual patterns of how the pandemic is affecting the world are starting to emerge, the spring 2022 should mark the long-awaited return to reliable live, in-person concerts – albeit with mandatory masking and proof of vaccination – in most of Europe’s concert halls.
Plans are underway for the scheduling of orchestra concerts, operas and festivals. Smaller ensembles are announcing their programme later than in previous years, but STI is constantly in touch with local venues and partners to secure tickets to wonderful performances for our Classical Italy, For the Love of Vienna and Classical Music on the Romantic Danube tours.
Please check our website for details on Special Travel International’s future tours, including our Oberammergau Passion Play tours, our Liberation of Holland tour and Classical Music tours:
https://www.sticanada.com/
On the Horizon for 2022-23