The Seven Wonders of the Ancient World

Seven Wonders of the World illustration

The list of the Seven Wonders of the Ancient World was compiled by the Greek writer Antipater of Sidon in a poem in 140 BCE. He, along with Philo of Byzantium, Strabo, Herodotus and Diodoros of Sicily, is responsible for providing the descriptions of these sites.
These man-made structures were all built sometime during the classical era and stretched across the current known western world at that time. The gardens, statues and tombs were the “crème de la crème” of ancient times – marvels of architecture, human ingenuity and engineering on a scale that even the greatest artists of contemporary times would have a hard time replicating today. Only one of the seven ancient wonders still stands – and arguably one of the most famous ones at that – the Great Pyramid of Giza.
Great pyramid at Giza, Egypt
The Great Pyramid at Giza was constructed between 2584 and 2561 BCE for the Egyptian Pharaoh Khufu (known in Greek as 'Cheops') and was the tallest manmade structure in the world for almost 4,000 years. Excavations of the interior of the pyramid were only initiated in earnest in the late 18th and early 19th centuries CE and so the intricacies of the interior which so intrigue modern people were unknown to the ancient writers. It was the structure itself with its perfect symmetry and imposing height which impressed ancient visitors.
In 2013, archaeologists discovered the first primary historical document during the construction of the pyramid. Logbooks over 4,500 years old, titled the Diary of Merer, recorded the daily activities of workers who helped build the pyramid. These papyri described the transportation of limestone from a harbour nearby. It is the only ancient wonder still in existence. 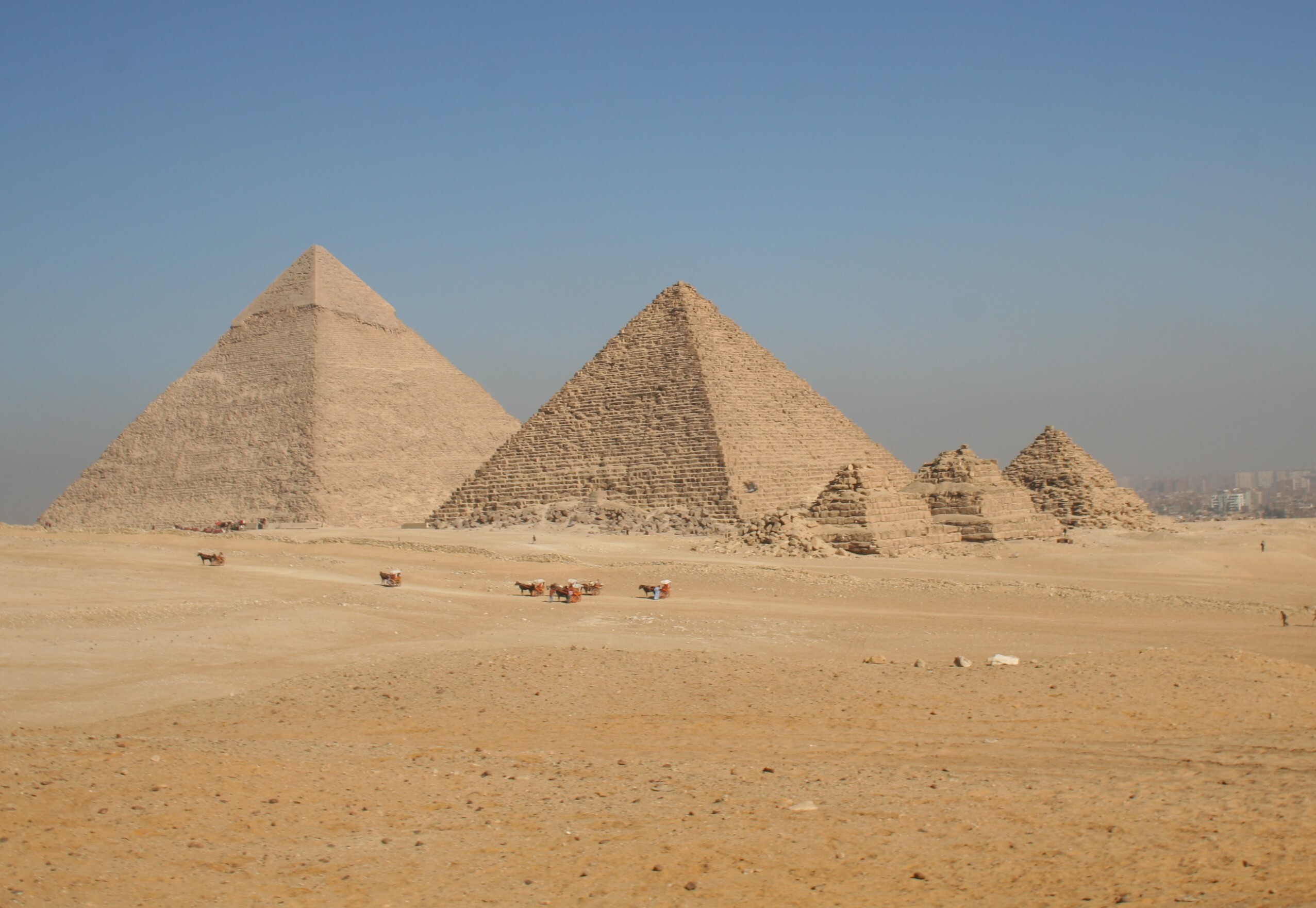 Great Pyramid of Giza © Flickr, mar is sea Y
Hanging gardens of Babylon
The Hanging Gardens of Babylon, if they existed as described, were built by Nebuchadnezzar II between 605-562 BCE as a gift to his wife. They are described by the ancient writer Diodorus Siculus as being self-watering planes of exotic flora and fauna reaching a height of over 23 metres through a series of climbing terraces. Diodorus wrote that Nebuchadnezzar's wife, Amtis of Media, missed the mountains and flowers of her homeland and so the king commanded that a mountain be created for her in Babylon.
The controversy over whether the gardens existed comes from the fact that they are nowhere mentioned in Babylonian history and that Herodotus, 'the Father of History', makes no mention of them in his descriptions of Babylon. There are many other ancient facts, figures and places Herodotus fails to mention, however, or has been shown to be wrong about. Diodorus, Philo, and the historian Strabo all claim the gardens existed. They were destroyed by an earthquake sometime after the 1st century CE. 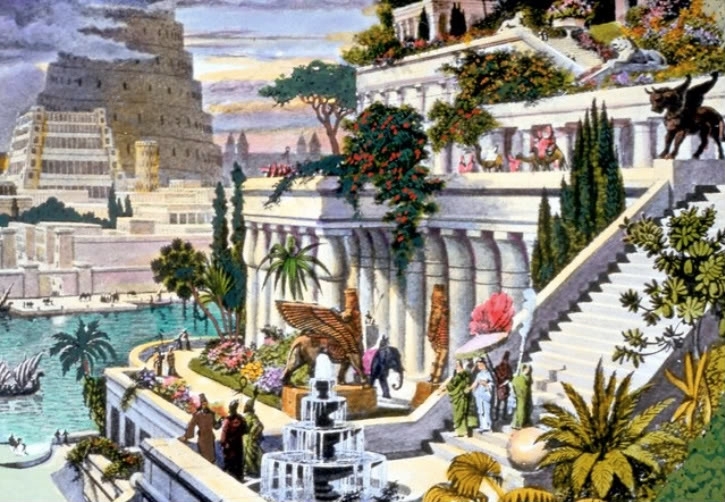 Hanging Gardens of Babylon
Statue of Zeus at Olympia, Greece
The Statue of Zeus at Olympia was created by the great Greek sculptor Phidias, known as the finest sculptor of the ancient world in the 5th century BCE. The statue depicted the god Zeus seated on his throne, his skin of ivory and robes of hammered gold, and was 12-metre tall, designed to inspire awe in the worshippers who came to the temple of Zeus at Olympia.
The temple fell into ruin after the rise of Christianity and the ban on the Olympic Games as 'pagan rites'. The statue was carried off to Constantinople where it was later destroyed by an earthquake, sometime in the 5th or 6th centuries CE. 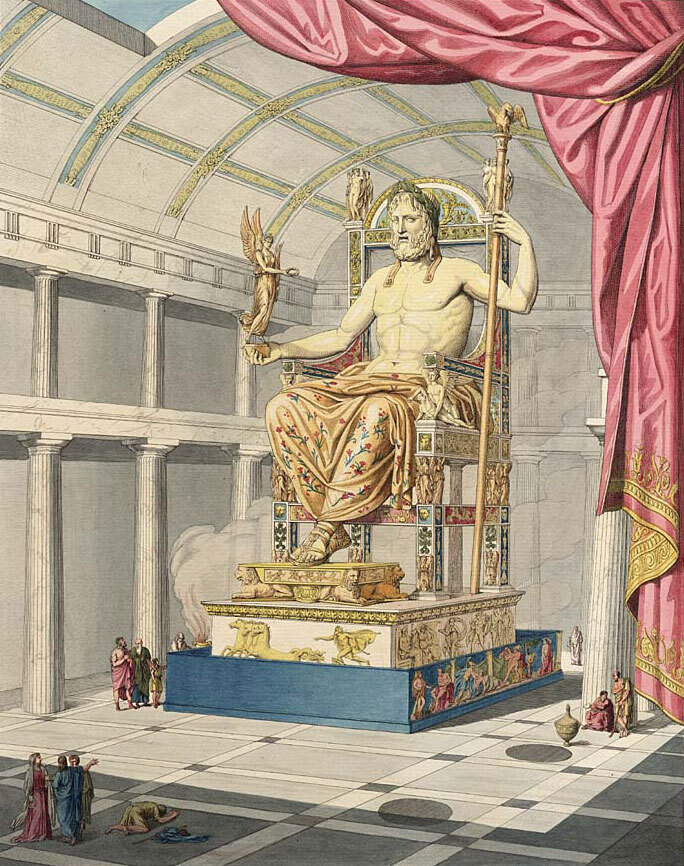 Statue of Zeus at Olympia
Temple of Artemis at Ephesus
The Temple of Artemis at Ephesus, a Greek colony in Asia Minor, took over 120 years to build and only one night to destroy. Completed in 550 BCE, the temple was 129-metre long, almost 69-metre wide, supported by 127 18-metre high columns. Sponsored by the wealthy King Croesus of Lydia, who spared no expense in anything he did, the temple was so magnificent that every account of it is written with the same tone of awe and each agrees with the other that this was among the most amazing structures ever raised by humans.
On July 21, 356 BCE a man named Herostratus set fire to the temple in order, as he said, to achieve lasting fame by forever being associated with the destruction of something so beautiful. The Ephesians decreed that his name should never be recorded nor remembered, but Strabo set it down as a point of interest in the history of the temple. On the same night the temple burned, Alexander the Great was born and, later, offered to rebuild the ruined temple, but the Ephesians refused. 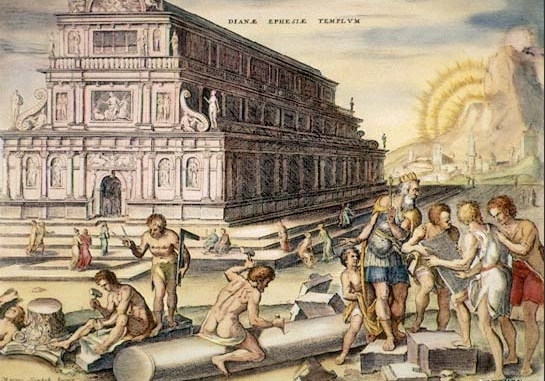 Temple of Artemis at Ephesus
Mausoleum at Halicarnassus
The Mausoleum at Halicarnassus was the tomb of the Persian Satrap Mausolus, built c. 351 BCE. Mausolus chose Halicarnassus as his capital city, and he and his beloved wife Artemisia went to great lengths to create a city whose beauty would be unmatched in the world. Mausolus died in 353 BCE, and Artemisia wished to create a final resting place worthy of such a great king. Artemisia died two years after Mausolus and her ashes were entombed with his in the mausoleum.
The tomb was 41-metre tall and ornately decorated with fine sculpture. It was destroyed by a series of earthquakes and lay in ruin for hundreds of years until, in 1494 CE, it was completely dismantled and used by the Knights of St. John of Malta in the building of their castle at Bodrum (where the ancient stones can still be seen today). It is from the tomb of Mausolus that the English word “mausoleum” is derived. 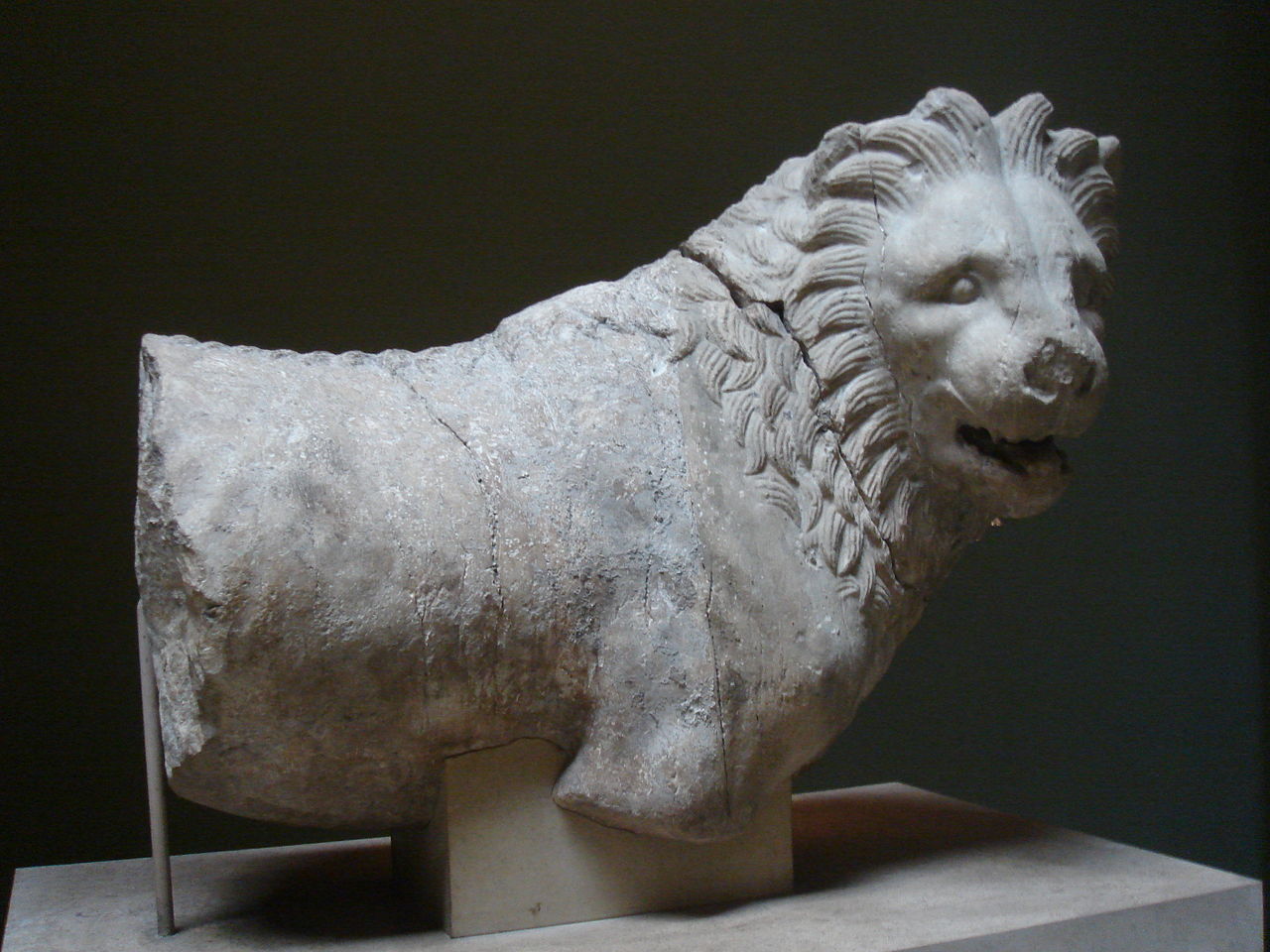 Lion from the Mausoleum at Halicarnassus, British Museum
Colossus of Rhodes
The Colossus of Rhodes was a statue dedicated to the god Helios. It was constructed between 292 and 280 BCE. At over 33-metre tall, it overlooked the harbour of Rhodes and stood on a base similar to the Statue of Liberty – which was modeled on the Colossus. The statue was commissioned after the Rhodians defeated an invading army in 304 BCE. Notably, the statue only stood for 56 years before being knocked out by an earthquake.
The statue was made purely out of bronze. Its ruins had become an attraction for over 800 years following its fall. Some ancient sources claimed that some of the fingers of the Colossus were larger than many statues at that time. Eventually, the ruins were sold to a Jewish merchant in 654 CE, who carried them away on 900 camels to be melted down. 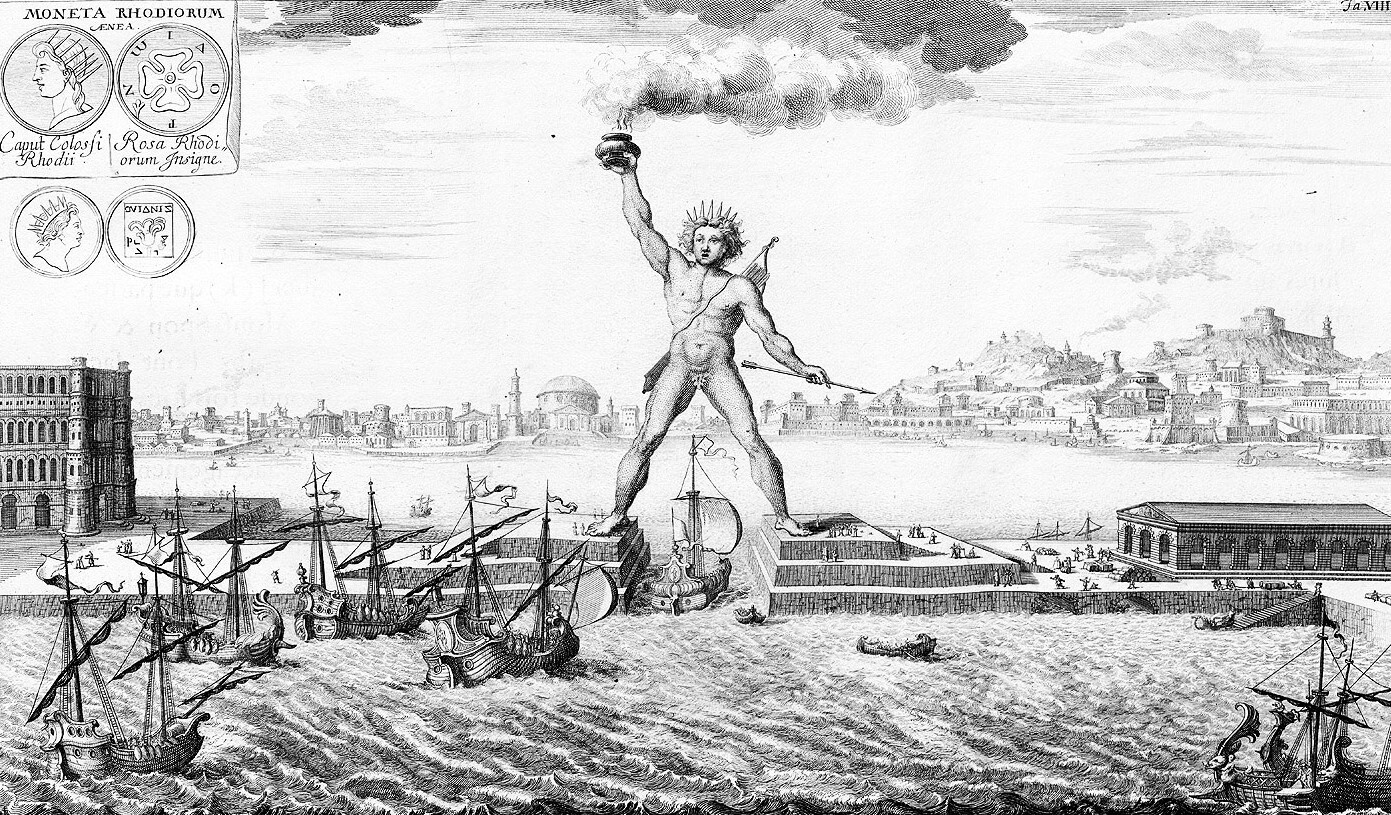 Colossus of Rhodes
Lighthouse at Alexandria, Egypt
The Lighthouse at Alexandria, built on the island of Pharos, stood close to 134 metres in height and was commissioned by Ptolemy I Soter. Construction was completed sometime around 280 BCE. The lighthouse was the third tallest human-made structure in the world (after the pyramids), and its light, a mirror which reflected the sun’s rays by day and a fire by night, could be seen as far as 35 miles out to sea.
The structure rose from a square base to a middle octagonal section up to a circular top and those who saw it in its glory reported that words were inadequate to describe its beauty. The lighthouse was gradually destroyed during a series of earthquakes from 956 to 1323. The Egyptian fort Quaitbey now stands on the site of the Pharos, built with some of the stones from the ruins of the lighthouse. 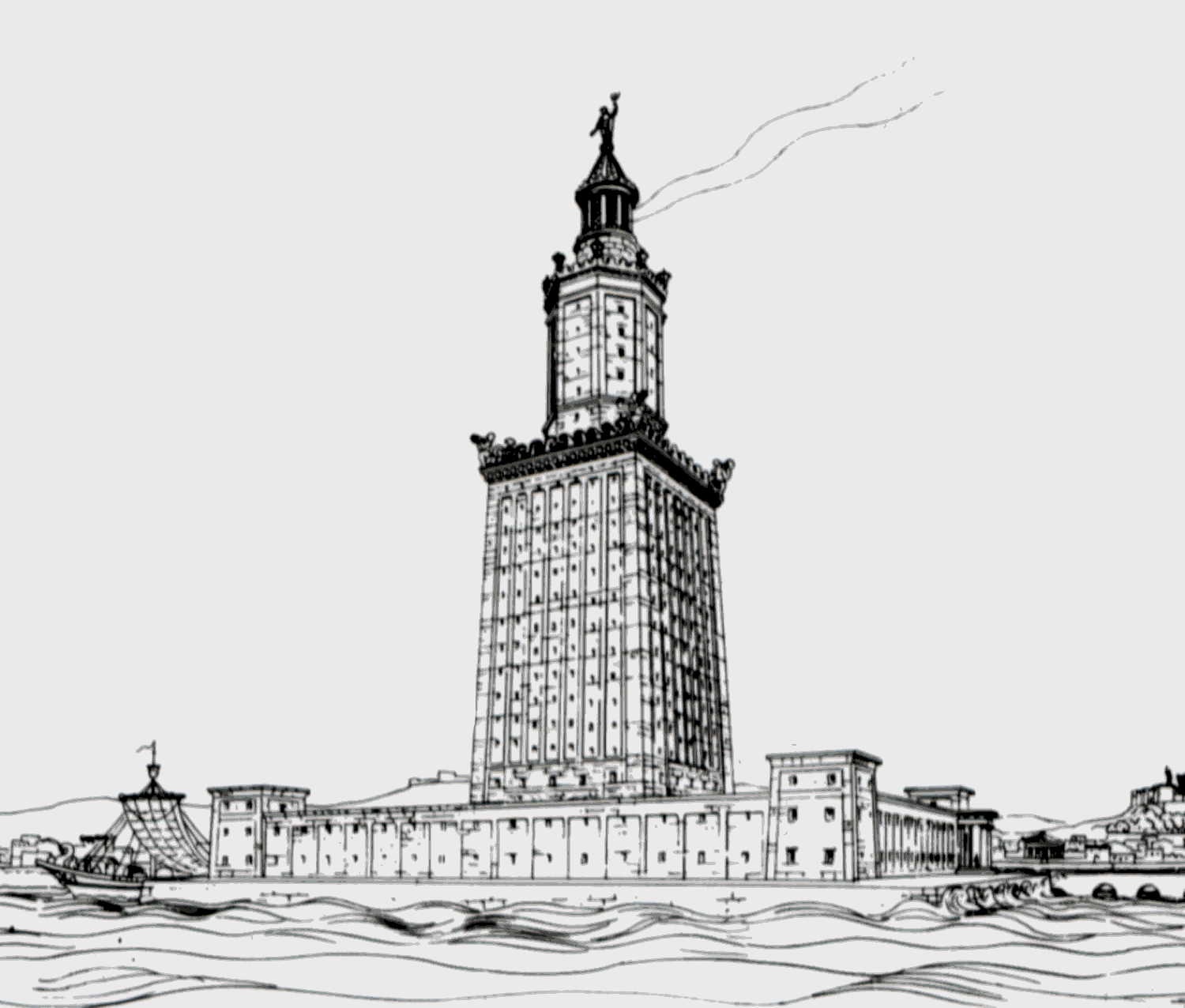 Lighthouse at Alexandria, drawing
The New Seven Wonders of the World
In 2007, the New 7 Wonders Foundation held a contest to name the “New 7 Wonders of the World.” Over 100 million people voted for the UNESCO World Heritage Sites that made the list. They span four continents and attract thousands of tourists each year: the Great Wall of China; the Taj Mahal in India; Petra in Jordan; the Colosseum in Rome, Italy; Christ the Redeemer statue in Rio de Janeiro, Brazil; Chichen Itza in Mexico and Machu Picchu in Peru.
See Rome’s Colosseum, one of the New Seven Wonders of the World, on Special Travel International’s military history tour to Italy: Canadian Campaign in Italy (May 17–29, 2020)
Discover three of the Seven Wonders of the Ancient World in Olympia, Ephesus and Rhodes, on Special Travel International’s tour to Greece: Highlights of Greece (Oct 4–18, 2020)
Discover more of the New Seven Wonders of the World on our 2021 tours, including the Taj Mahal on our tour to India & Sri Lanka (Jan 2021) and Machu Picchu on our tour to Ecuador, the Galápagos and Peru (Feb 2021). Stay tuned for more details!
On the Horizon for 2022-23