The Danube, an inspirational river for Classical Music

From its origins in western Germany’s Black Forest mountains, the Danube flows to the Black Sea over a course of 2,850 km, passing through ten countries. The second longest river in Europe is incredibly beautiful and powerful, and the monuments along its shores are many and remarkable. The mighty Danube has inspired and influenced countless composers and musicians; nowhere else on earth can match the Danube region for its contribution to classical music throughout the centuries. 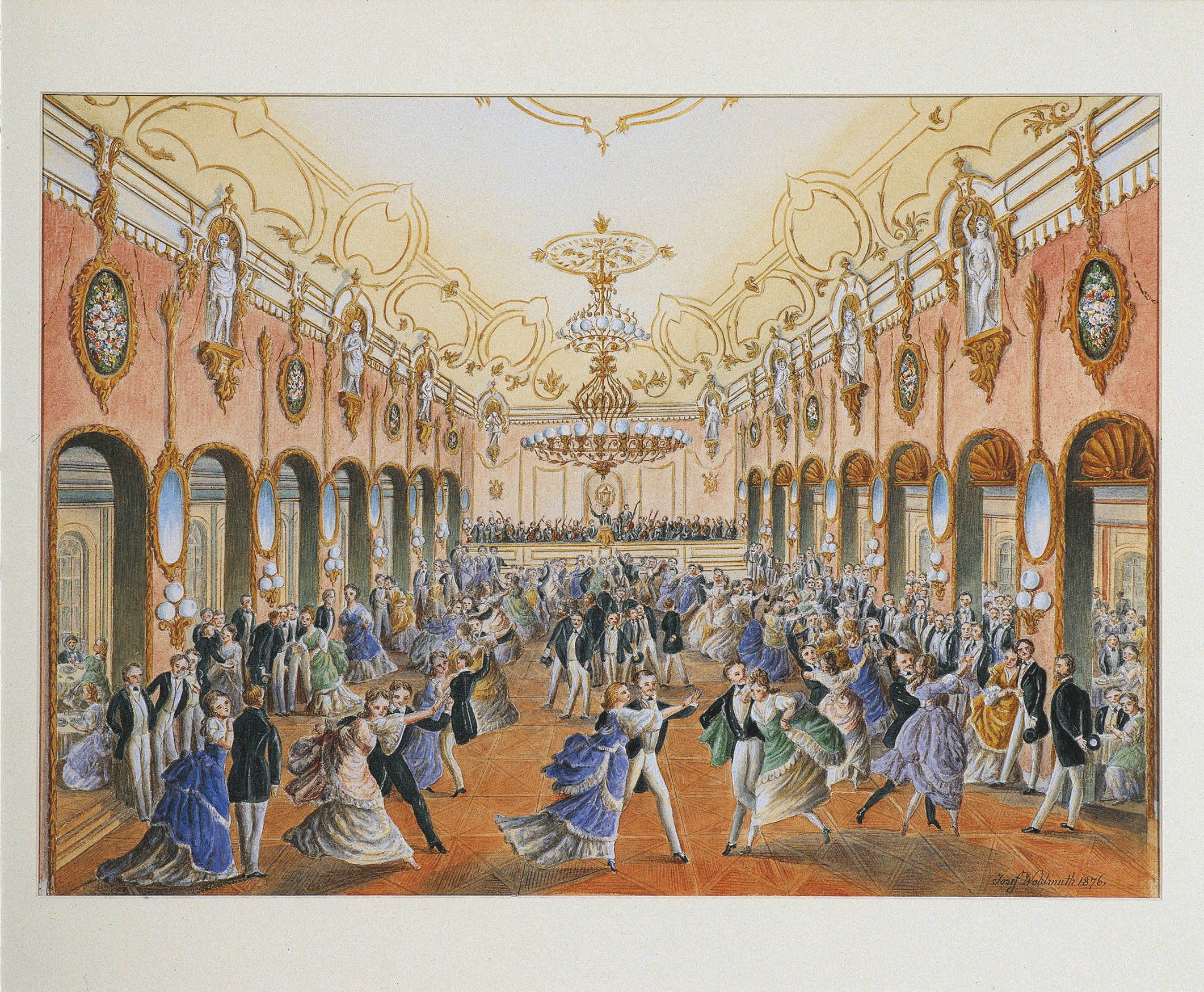 Ball in Vienna in the Strauss era, 1876 © Gerhard Trumler, Österreich Werbung
Recalling a poem by Karl Isidor Beck, Austrian composer Johann Strauss II (b. 1825 Vienna – d. 1899 Vienna) was inspired to write what is now one of the world’s most famous and beloved of all waltzes. Written in 1866, “The Blue Danube” ('An der schönen blauen Donau”) is Austria’s unofficial national anthem, intended at the time of its creation to capture the soul of Vienna and lift the country’s spirit following military defeat by Prussia. Although the original choral version was not an instant hit, its ethereal string tremolo and joyful melody soon won over the public when Strauss conducted the first orchestral version of his waltz at the 1867 Paris Exposition.
Another important Austrian composer from this period to find inspiration in the Danube was Anton Bruckner (b. 1824 Ansfelden, Linz – d. 1896 Vienna). Regarded as one of the most influential composers of his time, the gifted organist found inspiration in the beauty and stillness of the landscape along the Danube. Bruckner composed a number of highly original and monumental symphonies, as well as much sacred and secular choral music. An entire concert hall has been dedicated to him in Linz – the Brucknerhaus – home to the world-famous Bruckner Orchestra. Its gorgeous location right on the banks of the river provides great views of the “beautiful blue Danube”. 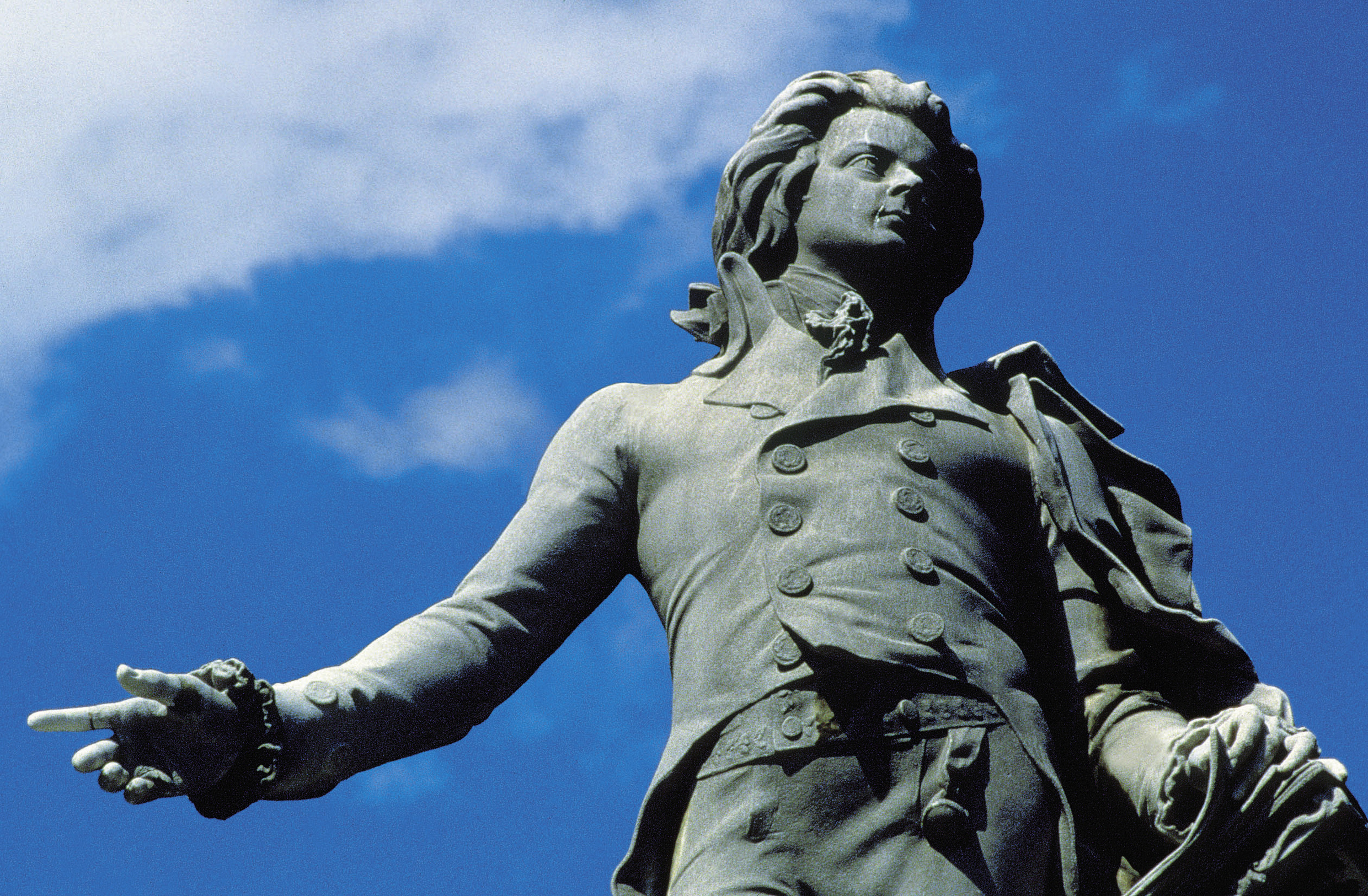 Mozart statue in the Burggarten, Vienna © Hans Wiesenhofer, Österreich Werbung
One of the most prolific and well-known classical composers, Wolfgang Amadeus Mozart (b. 1756 Salzburg – d. 1791 Vienna), was born and raised by the waters of the nearby Salzach river in the Baroque city of Salzburg. Mozart’s father was a minor composer and a violinist for the ruling Prince-Archbishop of Salzburg at the time. He introduced a very young Mozart to the keyboard, who took to it immediately and was composing his own pieces by the time he was around four or five. Mozart’s youth was spent travelling with his family to perform in various different countries and even stayed in the castle of the princes of Furstenberg in Donaueschingen, at the very place where the Danube takes its source. Mozart became employed as a court musician around 1773 by the then ruler of Salzburg. But it was in his later years that Mozart’s prodigious talent was brought to light through the compositions produced during his time spent in Vienna. It was here that Mozart decided to resign from his post in Salzburg and take up being a freelance performer and composer, a step that would go on to shape his future greatly. Mozart went on to spend many successful years living in Vienna and enjoyed an extensive career that is still celebrated to this day, as shown by the statue outside the Hofburg Palace in his honour.
One cannot underestimate the influence of the Danube in the sources of inspiration of Ludwig Van Beethoven (b. 1770 Bonn – d. 1827 Vienna). Beethoven arrived in Vienna in 1792. His talent had burned bright from a young age and was noticed by his father while receiving tutelage, something Beethoven and Mozart had in common. He was later introduced to Joseph Haydn, who became a trusted mentor. It was with Haydn that Beethoven’s career flourished and matured within Vienna’s vibrant musical landscape. Many of Beethoven’s pieces became highly popular, notably his Für Elise, Moonlight Sonata and Fifth Symphony, cementing him as a successor to the widely celebrated composers that came before and helped fill the hole that Mozart’s death left. Over time, he became as revered as the man he was expected to fill the shoes of, with Beethoven’s impressive legacy living on within the renditions of his music by contemporary orchestras across Vienna and the world over. 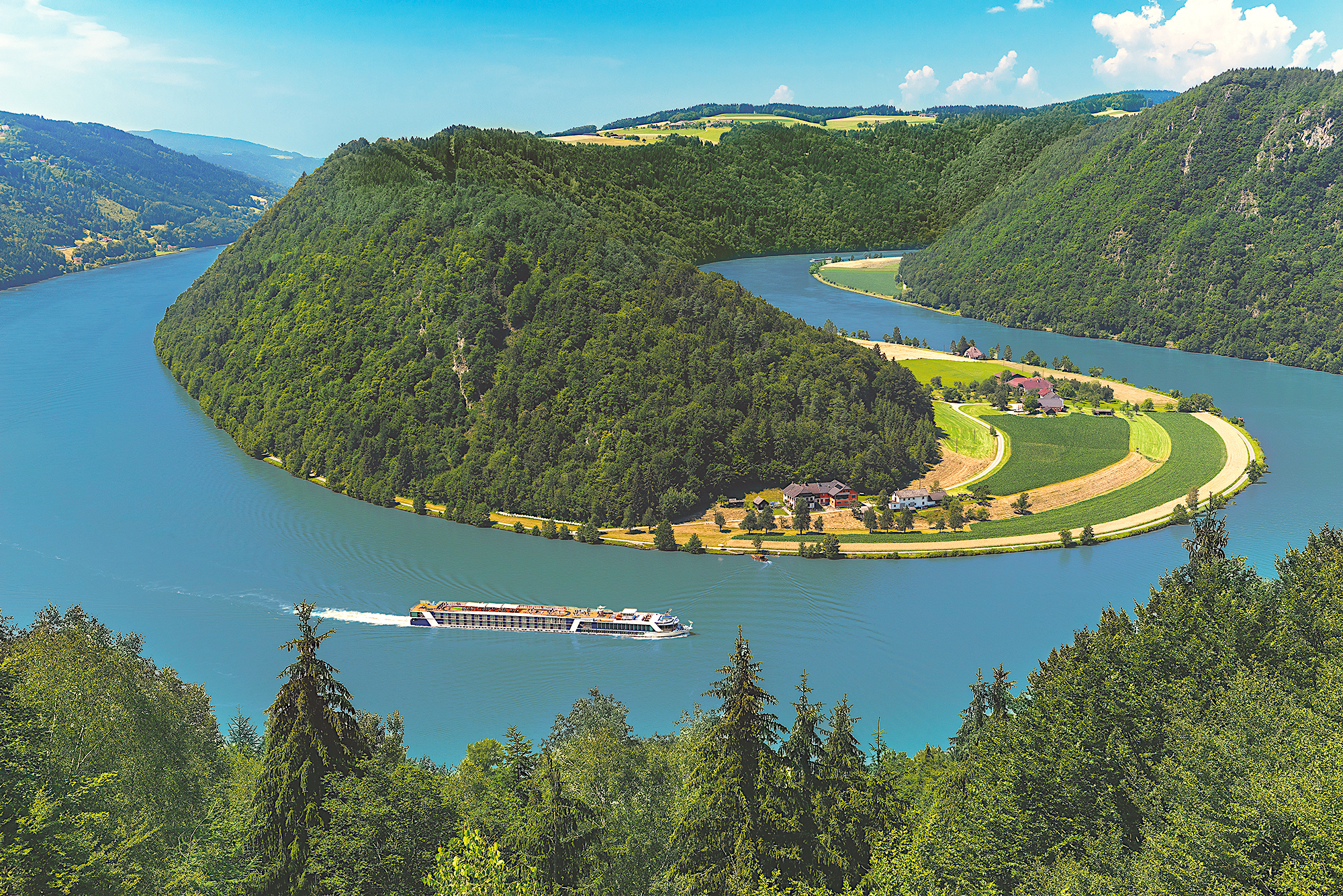 Danube © AmaWaterways
Béla Bartók (b. 1881 Nagyszentmiklós, Hungary – d. 1945 New York) was born in the Transylvanian town Nagyszentmiklós in the Kingdom of Hungary (present-day Sânnicolau Mare, Romania). He spent his childhood and youth in various provincial towns and learned to play the piano early; by the age of four he was able to play 40 songs, and his mother began teaching him at the age of five. The works of Bartók's youth were written in a classical and early romantic style touched with influences of popular and romani music. Although most of these were simple dance pieces, in his early works Bartók began to tackle some more advanced forms, as in his ten-part programmatic A Duna folyása (The Course of the Danube, 1890–94), which he played in his first public recital in 1892. This poem for piano, which he was most proud of, describes the descent of the river from its source to the Black Sea. Béla Bartók is considered one of the most important composers of the 20th century; he fused the essence of Hungarian and related folk music with traditional music to achieve a style that was at once nationalistic and deeply personal. As a pianist he gave concerts in Europe and the United States, disseminating the newer Hungarian music. As a teacher he helped train generations of pianists, both Hungarian and foreign. And as an ethnomusicologist he was one of the first to examine folk music with attention to its historical and sociological implications.
Franz Liszt (b. 1811 Raiding, Austria – 1856 Bayreuth, Germany) was passionately taught how to play piano by his father. By the age of 6, young Liszt was recognized as a child prodigy, composing elementary works and appearing in concerts by the age of 9. Liszt gained renown in Europe; he was a friend, musical promoter and benefactor to many composers of his time including Frédéric Chopin, Richard Wagner, Hector Berlioz and Robert Schumann. In a 1834 essay, Liszt expresses the desire to unite the theatre and the church. For Liszt, one of the most important parts of his work is his corpus of religious music and his later years are dominated by a series of inspired sacred compositions. In 1856, Liszt writes the Missa Solemnis called “Graner Messe” for the consecration of the basilica of Esztergom on the Danube.
Johannes Brahms (b. 1833, Hamburg – d. 1897 Vienna) was the great master of symphonic and sonata style. He can be viewed as the protagonist of the Classical tradition of Haydn, Mozart and Beethoven in a period when the standards of this tradition were being questioned or overturned by the Romantics. Brahms wrote symphonies, concerti, chamber music, piano works, choral compositions and more than 200 songs, including Am Donaustrande, Op. 52, No. 9:
On the Danube’s bank there stands a house,
and there a rosy maiden gazes out.
The maiden is quite well protected;
ten iron bars are blocking her door.
Ten iron bars – that’s a joke!
I’ll break them as if they were only glass.
On the Danube’s bank there stands a house,
and there a rosy maiden gazes out.
Another famous waltz is The Waves of the Danube by Romanian composer Iosif Ivanovici (b. 1845 Timișoara, Romania – d. 1902 Bucharest) – sensation at the 1889 Paris Exposition. Ivanovici was a Romanian military band conductor and composer. He composed over 300 works (many of them lost today) in his lifetime. 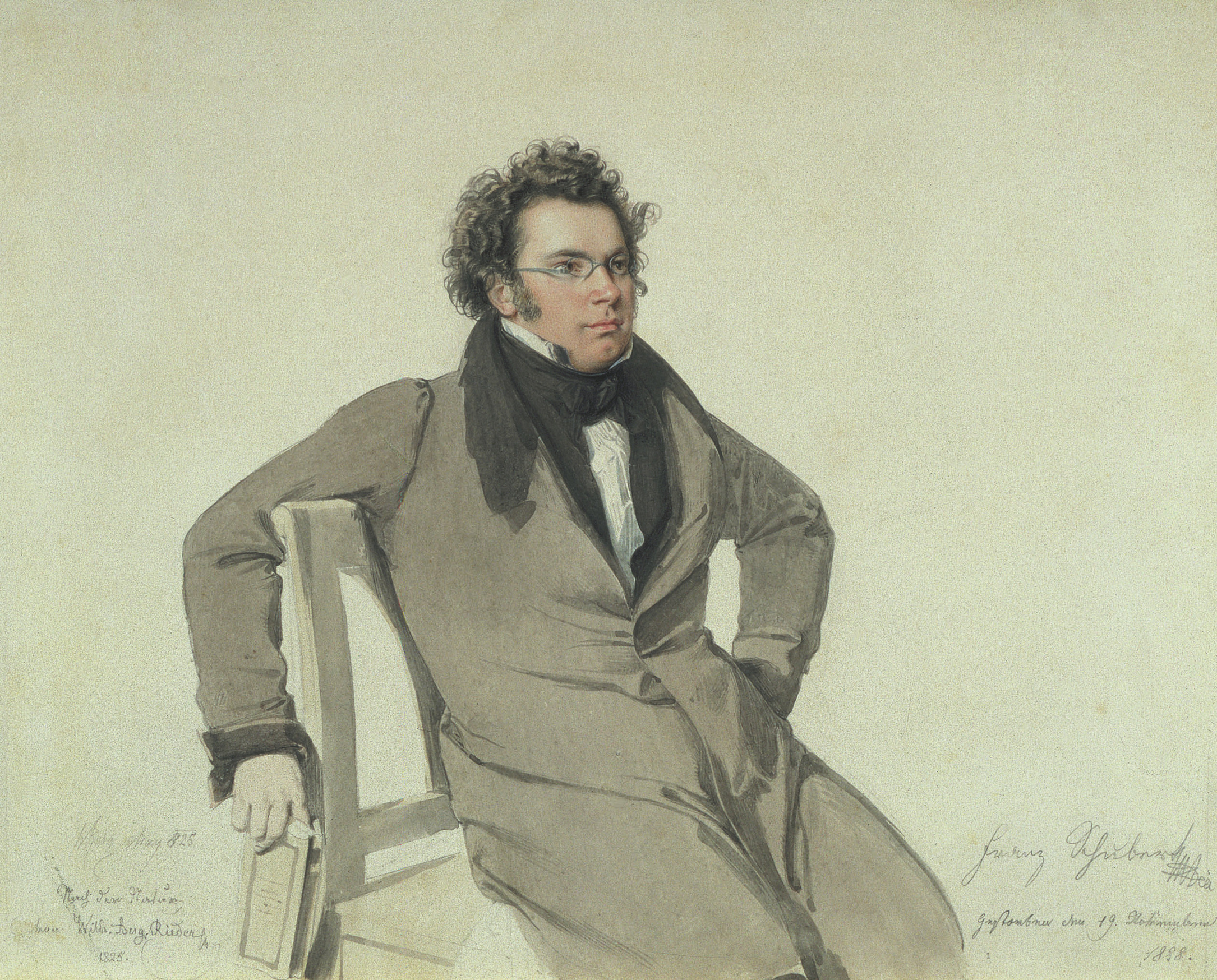 Franz Schubert © Gerhard Trumler, Österreich Werbung
Despite his short lifetime, Franz Schubert (b. 1797, Vienna – d. 1828 Vienna) left behind a vast oeuvre. He bridged the worlds of Classical and Romantic music, noted for the melody and harmony in his songs (lieder) and chamber music. Schubert received a thorough musical education and won a scholarship to boarding school. Although he was never rich, the composer's work gained recognition and popularity. Nature and its elements are an immense source of inspiration for Schubert and several of his songs are devoted to the river and its boatmen including Am Strome (By the River), Lied eines Schiffers an die Dioskuren (Boatman's song to the Dioscuri), Der Schiffer (The Boatman) and Auf der Donau (On the Danube).
Discover the musical legacy of these classical composers on Special Travel International’s upcoming cruises on the Danube:
Classical Music on the Romantic Danube and Prague extension (Sep 27 – Oct 7/10, 2022)
The Historic Danube: Golf & Culture (Sep 27 – Oct 10, 2022)
On the Horizon for 2022-23