Vienna has been the centre of expansive empires throughout its fascinatingly varied history. We hope you enjoy these interesting history facts about the Austrian capital.
Marcus Aurelius died in Vindobona
Around 2,000 years ago, long before Vienna echoed to the sound of violins and pianos, you could hear the stamp of Roman legions marching through the streets. Vienna’s roots date back to 15 BC when the Romans established the military base Vindobona on the Danube River which, at its peak, was home to around 30,000 people. The Danube marked the border between the Roman Empire and the German tribes, so Vindobona formed one of a series of defensive military positions along the river. Much of Vienna’s city centre stands on the former Roman site. Marcus Aurelius, the last of the rulers known as the Five Good Emperors, and the last emperor of the Pax Romana, is said to have died in Vindobona on 17 March 180. 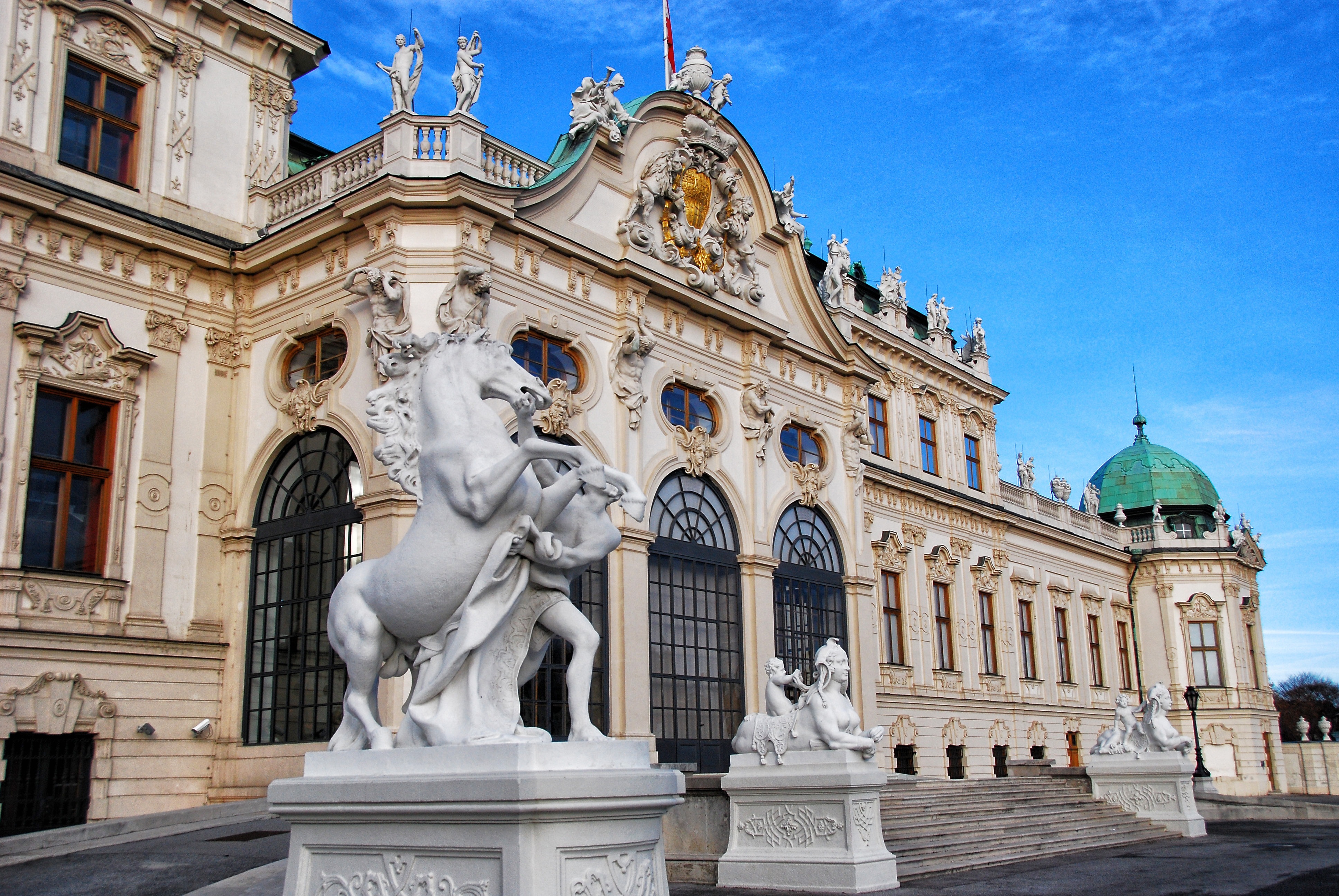 Belvedere Palace, Vienna
The Habsburg legacy
Vienna's imperial grandeur is the legacy of the powerful Habsburg monarchy. Their home for more than six centuries, the Hofburg palace complex, incorporates the Burgkapelle (Imperial Chapel), where the Vienna Boys' Choir sings Sunday Mass, and the famed Spanish Riding School, where Lipizzaner stallions perform elegant equine ballet, along with a trove of museums, including in the chandeliered Kaiserappartements (Imperial Apartments). Other immense palaces include the baroque Schloss Belvedere and the Habsburgs' 1441-room summer residence, Schönbrunn Palace, while 19th-century splendours such as the neo-Gothic Rathaus (City Hall) line the magnificent Ringstrasse encircling the Innere Stadt (inner city). In the Imperial Vault beneath the Capuchin Church are the most important tombs of the Habsburgs. Since 1633, 149 members of the dynasty have been buried here.
The croissant was invented in Austria
The Ottoman Empire attempted to conquer Vienna twice – in 1529 and in 1683. Legend has it that the croissant was invented in 1683 during the siege of Vienna. According to one account, the Ottomans tried to break a two-month stalemate of siege warfare by tunneling under the city one night. But a group of bakers who were up early preparing their goods for the defenders heard them and sounded the alarm. Around mid-September, Polish troops rode to the aid of the besieged city, and the defenders were victorious. To commemorate the victory, the bakers created a special pastry in a crescent moon shape, which was the symbol on the Ottoman flag. They called their creation Kipferl, which means crescent in the Austrian German language. 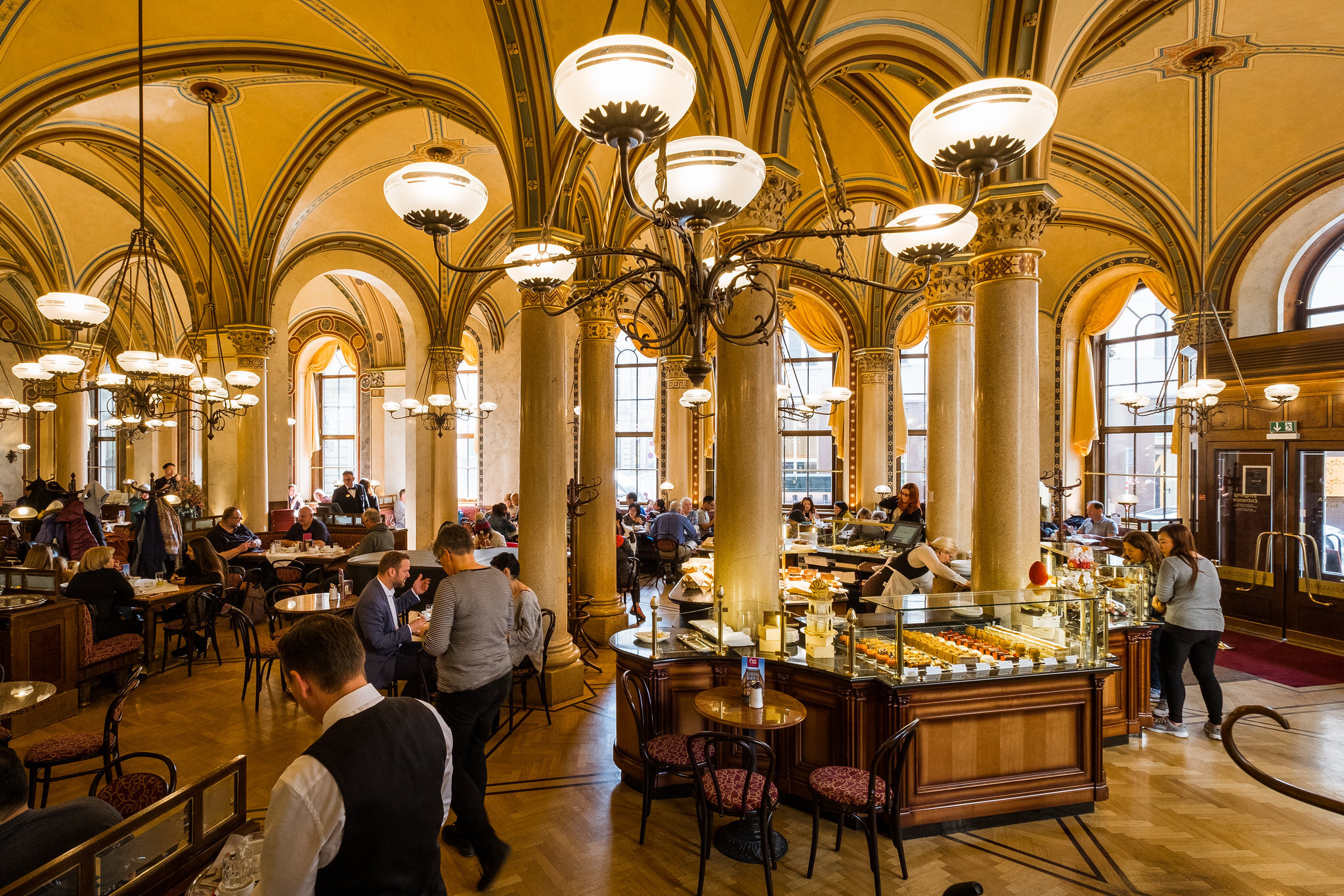 Cafe Central, Vienna © a.canvas.of.light
The Turks introduced coffee in Vienna
Coffee also became a part of Vienna’s identity after the Siege of Vienna. Following their defeat, the Turks left bags of coffee beans behind, effectively introducing Vienna to the beverage. Its immediate popularity led to the opening of coffee houses across town. Many of today’s remaining coffee houses are over 300 years old, and remain mostly unchanged. To put their historical importance into perspective, Café Korb, a local hotspot to this day, had Emperor Franz Josef in attendance on its opening day in 1904.
One of the largest cemeteries in the world
Vienna Central Cemetery, established in 1874, is one of the largest cemeteries in the world. It is the final resting place of more than 3 million people and is home to about 330,000 graves. Unlike many others, the Wiener Zentralfriedhof is not one that has evolved slowly. The decision to establish a new, big cemetery for Vienna came in 1863 when it became clear that, due to industrialization, the city's population would eventually increase to such an extent that the existing communal cemeteries would prove to be insufficient. The cemetery is home to world-famous musicians such as Beethoven, Brahms, Schubert, Strauss, Schoenberg, Salieri and many more. 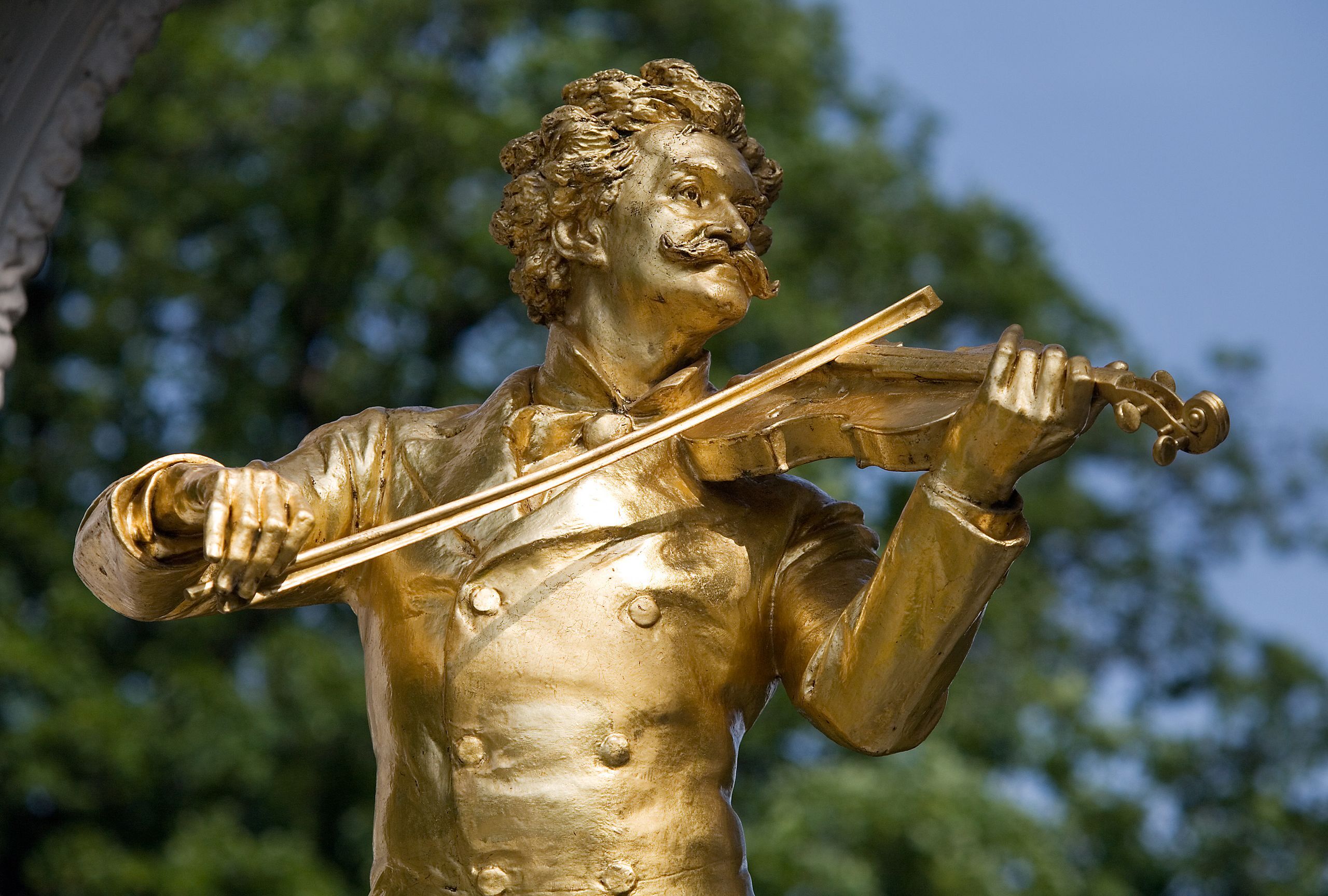 Johann Strauss Monument, Vienna © Jorge Royan
The Golden Age
From the 1890s until the outbreak of WWI in 1914, Vienna was a magnet for the Austro-Hungarian empire's best and experienced a Golden Age. Fin-de-siècle Vienna was a place where Austria’s most important personalities in arts, letters and philosophy crossed paths, reimagined the world as they had known it and paved the way for new thinking in the 20th century – among them musicians Gustav Mahler and Arnold Schoenberg, as well as philosopher Sigmund Freud. Artists Gustav Klimt, Egon Schiele, Oskar Kokoschka, and architects Otto Wagner, Josef Hoffmann and Adolf Loos were the leading lights in this thriving visual-arts community. Like those of their fellow innovators, the works of these visual artists and composers signaled both the end of 19th-century Viennese culture and the beginning of 20th-century modernism.
Hitler, Trotsky, Tito, Freud and Stalin were practically neighbours in 1913
In 1913, one section of Vienna played host to Hitler, Trotsky, Tito, Freud and Stalin. The neurologist Sigmund Freud moved to Vienna in 1860 as a child and left the city in 1938 after the Nazis annexed Austria. Soviet dictator Joseph Stalin spent a month in the city, meeting Trotsky and writing Marxism and the National Question, with Nikolay Bukharin. Nazi leader Adolf Hitler is believed to have lived there between 1908 and 1913, where he struggled to make a living as a painter. Josip Broz, later Yugoslav leader Marshal Tito, was a metal worker before being drafted into the Austro-Hungarian army. Russian revolutionary Leon Trotsky lived in Vienna from about 1907 to 1914, launching the paper Pravda – The Truth. On some occasions, these historical figures were practically neighbours, living just a few feet apart and even visited the same cafés.
Occuped Vienna was divided into four zones
In the aftermath of WWII, Berlin was not the only city that the Allies separated into sections after the war ended. France, the United States, the United Kingdom and the Soviet Union occupied Vienna all at once, splitting it into four parts. The ordeal ended in 1955 with the signing of the Austrian State Treaty, which re-established Austria as a sovereign state. 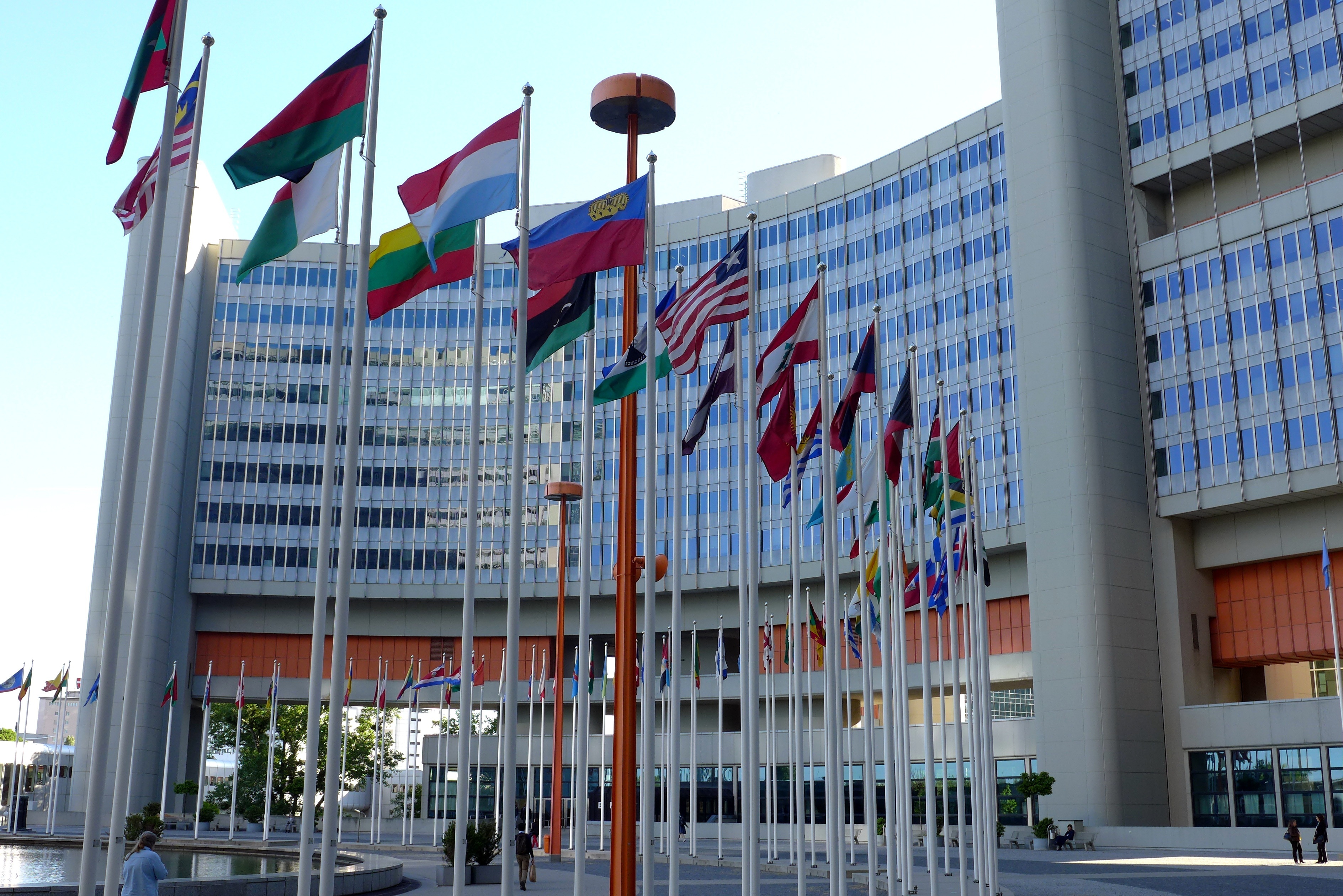 Vienna International Centre (VIC)
United Nations and other headquarters
Vienna is a hub of international diplomacy. It is the only city in the European Union which, for more than 40 years, has hosted one of the four headquarters of the United Nations (UN) at the Vienna International Centre (VIC). Further headquarters are located in New York, Geneva and Nairobi. The UN in Vienna employs more than 5,000 people from 125 countries; about one third of the employees are Austrians. In addition to the offices and organisations of the UN, Vienna is also the seat of a number of other international organisations and institutions, such as the Organisation for Security and Cooperation in Europe (OSCE), the Organisation of the Petroleum Exporting Countries (OPEC) and several Non-Governmental Organisations (NGOs).
Discover more of Vienna on Special Travel International’s upcoming tours:
For the Love of Vienna (May 9–17, 2022)
Alpine Pilgrimage in Austria & Germany & Oberammergau Passion Play (August 14–27, 2022)
Classical Music on the Romantic Danube (September 27 – October 7/10, 2022)
The Historic Danube: Golf & Culture (September 27 – October 10, 2022)
On the Horizon for 2024-25