Schloss Leopoldskron, Salzburg – the iconic setting of ‘The Sound of Music’

Schloss Leopoldskron was commissioned as a family estate in 1736 by the Prince-Archbishop of Salzburg, Leopold Anton Freiherr von Firmian (1679-1744). Leopold Firmian was a great lover of science and the arts but is most remembered for his role in the expulsion of more than 22,000 Protestants from the Archbishopric of Salzburg. Leopold’s harsh actions were noticed all over Europe and both Salzburg’s economy and the reputation of the Firmian family suffered severely as a result. The commission of Schloss Leopoldskron was, in part, an attempt by the Archbishop to rescue the social standing of his family. After his death in 1744, his heart was interred below the chapel of the Schloss which, as is inscribed on the chapel floor, he “loved so dearly”.
During the 19th century, the Schloss passed through various hands, among them Bavarian King Ludwig I. In 1918, the Schloss, which by that time had fallen into a state of severe disrepair, was sold to Max Reinhardt, Europe’s most famous theatre impresario. Over the course of 20 years, he restored this jewel of the Baroque to renewed glory. In those days, the palace also served as an international, high-profile meeting place for the artistic and cultural scene. Reinhardt brought life to Schloss Leopoldskron with his theatre productions. In the plays, Reinhardt made use of the entire Schloss by moving audiences from room to room, which were used as sets in and of themselves. 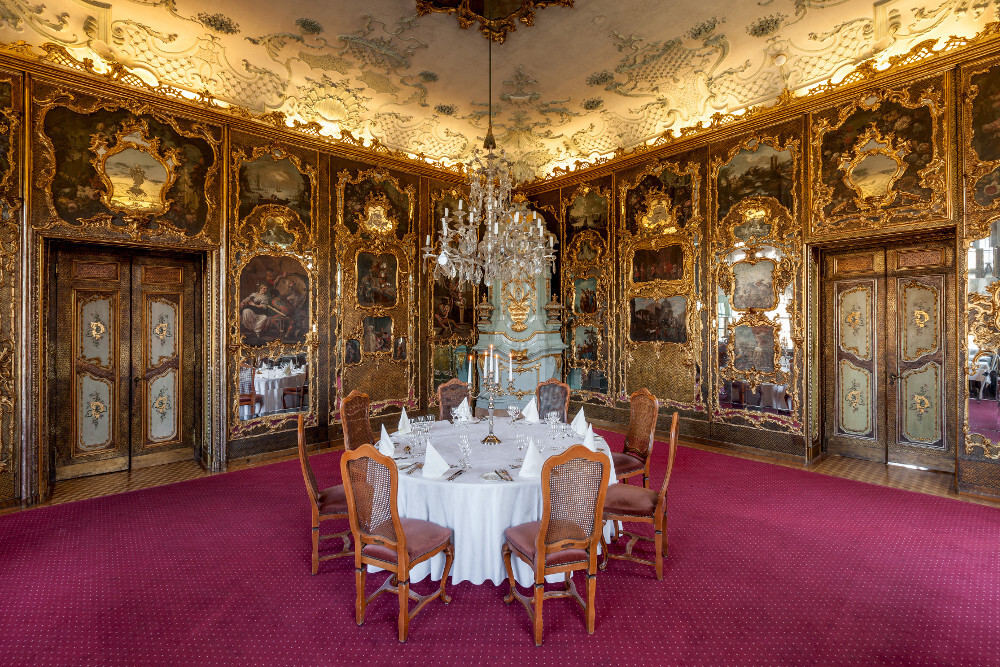 Venetian Room © Schloss Leopoldskron
Together with Hugo von Hofmannsthal and Richard Strauss, Max Reinhardt founded the Salzburg Festival at Schloss Leopoldskron, which officially started with a performance of Hofmannsthal's “Jedermann” on the city's dome square on 22 August 1920.
World War II brought an end to the Reinhardt era. In 1938, the Schloss was confiscated by the Nazi government as “Jewish property”. Reinhardt, who was living and working in Hollywood at the time, never returned to Leopoldskron, but his heart never left. Max Reinhardt died in New York City in 1943. Prior to his death, he wrote to his wife, the Austrian actress Helene Thimig: “I have lived in Leopoldskron for eighteen years, truly lived, and I have brought it to life. I have lived every room, every table, every chair, every light, and every picture. I have built, designed, decorated, planted and I have dreamt of it when I was not there. I have always loved it in a festive way, not as something ordinary. Those were my most beautiful, prolific and mature years... I have lost it without lamenting. I have lost everything that I carried into it. It was the harvest of my life’s work.” 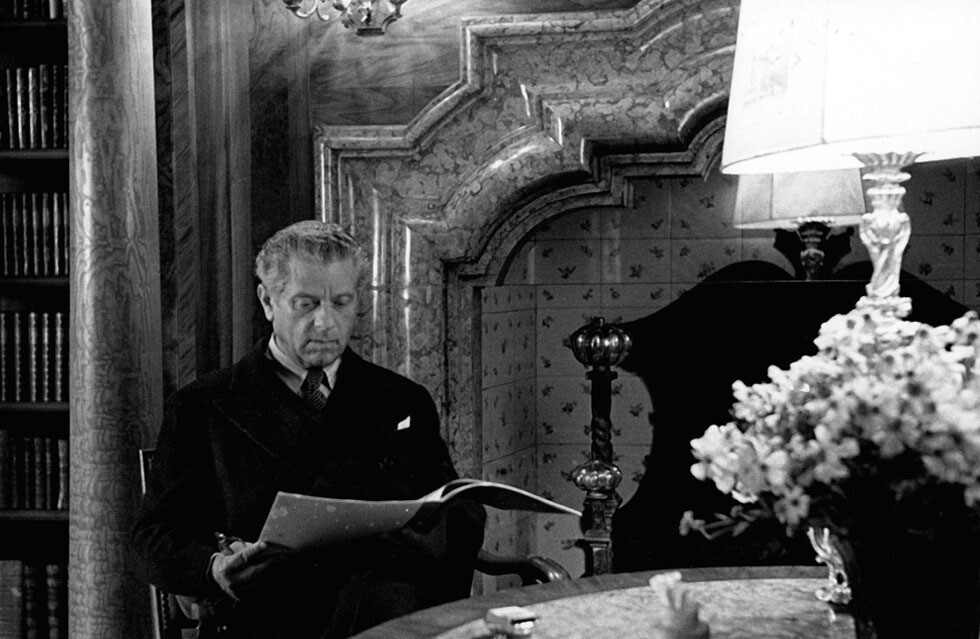 Max Rheinhardt in Schloss Leopoldskron, 1920 © Ellinger, Salzburg Festspiele
In 1965, Schloss Leopoldskron became famous beyond Austria’s borders as an original shooting location for “The Sound of Music”. At that time a white music pavilion stood in the palace park and played an important role in the film’s romantic scenes. Since the number of tourists increased tremendously after the release of “The Sound of Music”, the pavilion was moved to Schloss Hellbrunn in order to reduce the congestion in the park at Schloss Leopoldskron. The Venetian Room was the blueprint for the Trapps' lavish ballroom, where the children bid their farewells. 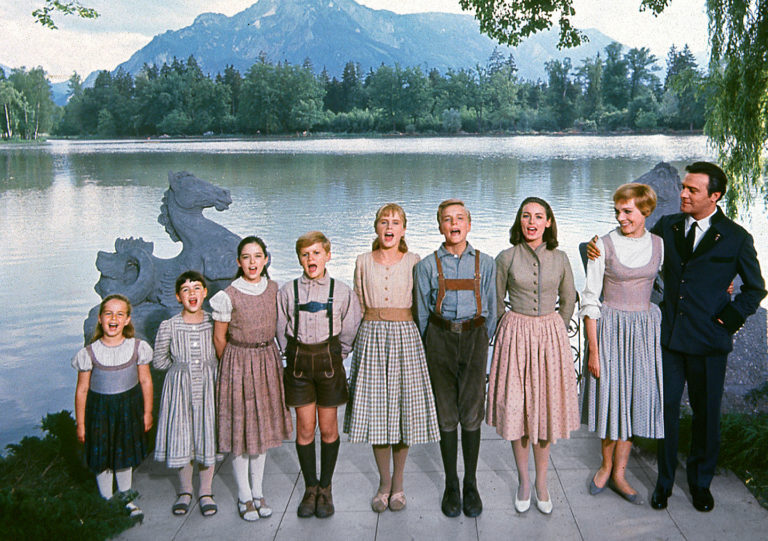 Replica of Schloss Leopoldskron terrace © The Sound of Music
In 1987, a special production called “The Sound of Christmas” was filmed at Schloss Leopoldskron, starring Julie Andrews, John Denver and Plácido Domingo, thus re-establishing the connection to the movie.
Today Schloss Leopoldskron offers the opportunity to stay in a truly idyllic setting on the outskirts of Salzburg, with unrivalled vistas of the lake and Untersberg mountain. Secluded behind the historic walls of this former princely residence are luxurious suites and rooms. Admission to the palace, the park grounds and its historic landmarks is restricted solely to invited guests and hotel guests. 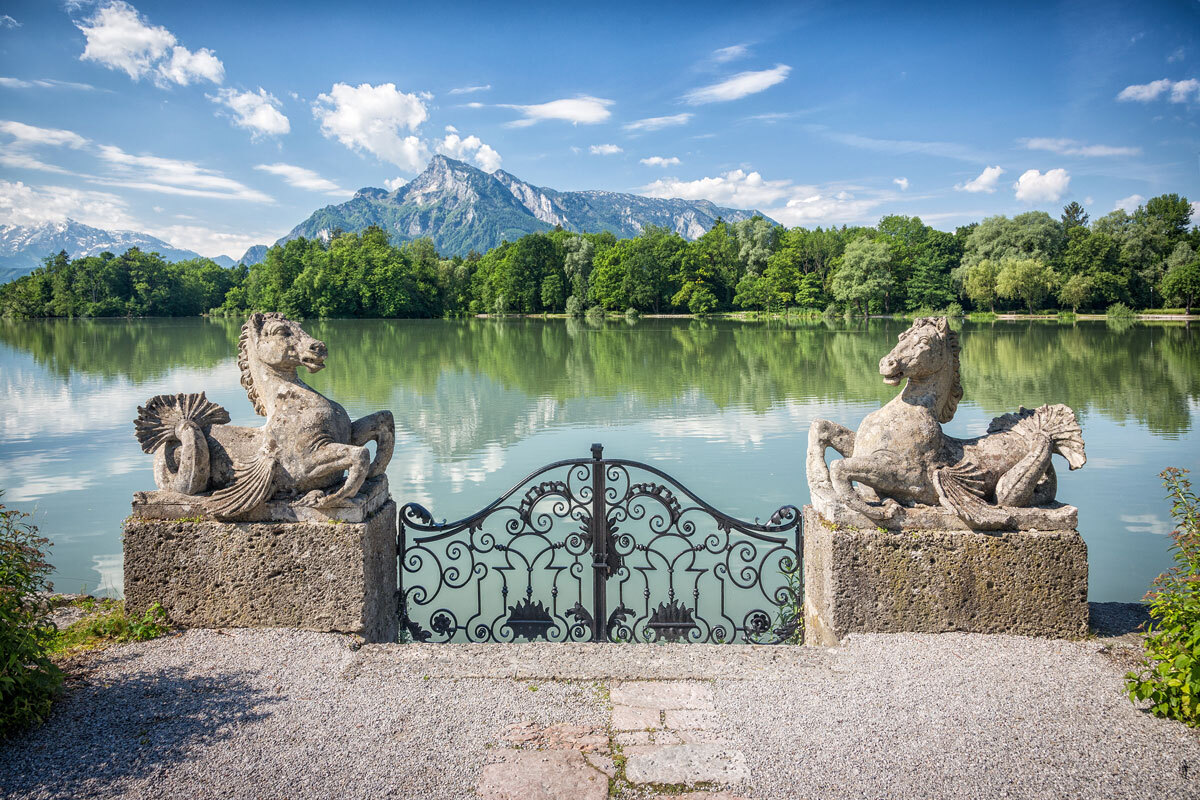 Untersberg view © Schloss Leopoldskron
Spend 3 nights at Schloss Leopoldskron and enjoy a special concert by the violin and piano duo of Kai Gleusteen and Catherine Ordronneau in the Schloss’ Great Hall on Special Travel International’s Classical Austria tour (May 26 – June 9, 2020).
On the Horizon for 2022