REMEMBRANCE DAY 2021
We remember Heroes and our Friends

The Remembrance Day Ceremony has played a major role in Remembrance since 1931. In accordance with the armistice signed by representatives of Germany and the Entente, marking the end of the First World War hostilities, every year, at the 11th hour of the 11th day of the 11th month, we gather in memorial parks, community halls, workplaces, schools and homes to stand in honour of all who have fallen.
The tradition of Remembrance Day evolved out of Armistice Day. The initial Armistice Day was observed at Buckingham Palace, commencing with King George V hosting a 'Banquet in Honour of the President of the French Republic' during the evening hours of November 10, 1919. The first official Armistice Day was subsequently held on the grounds of Buckingham Palace the following morning. During the Second World War, many countries changed the name of the holiday. Member states of the Commonwealth of Nations adopted Remembrance Day, while the U.S. chose Veterans Day.
As we observe Remembrance Day, we, as a company, would also like to remember the many who have left us over the past years – the veterans who travelled with us over the years to sites where they contributed so much in the fight for freedom, their families and friends who came along on our tours to pay tribute to the ones who stayed behind more than half a century ago.
And especially we would also like to remember our friend Ken MacLeod.
Ken MacLeod became part of our travel life in 1994, when he walked into our office, on the recommendation of a fellow teacher. He produced a travel itinerary titled “Liberation of Holland” and asked us if we could set up this tour at a lower rate than what another operator was offering, without compromising on the quality of accommodation, transport and visits. We rose up to the challenge, and the tour was a huge success; we travelled to Holland with five coaches in 1995, commemorating Canada’s friendship with the Dutch since WWII.
Since then, Ken has been our military historian on over 25 tours until his untimely passing in December 2018. With his enthusiasm and incredible dedication to keeping the memories alive, he has been an invaluable part of all these trips – from the planning stages to ensuring the route is in accordance to what is important for Canadians, to keeping in touch with locals (which allowed our travellers many wonderful and meaningful interactions with the people of Holland, Belgium, France and Italy) and talking to pretty much everyone about the cause that was so dear to him. 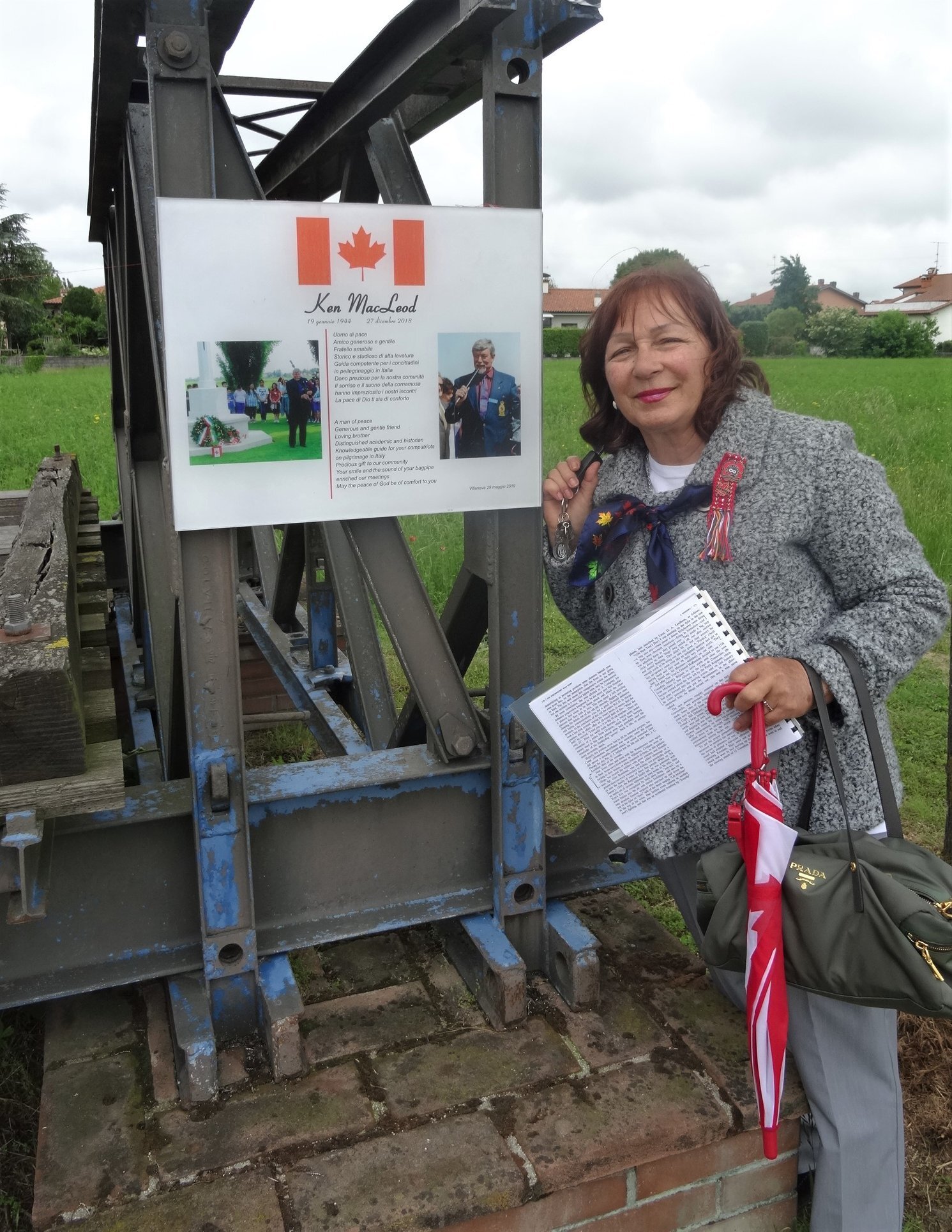 Rosalia Fantoni at Ken’s Memorial unveiling in Villanova, 2019
He had many friends in Europe who, like him, worked hard to keep the memories alive in towns like Dieppe, Ortona and Cassino – just to name a few. In Villanova, in the Po Valley, Italy, Rosalia Fantoni was a special friend who shared Ken’s passion for veterans and their achievements. When he passed, she arranged for a beautiful tribute to him in Villanova. We were there at the unveiling in 2019. Little did we know that she would follow Ken’s footsteps just a year later in 2020. Ciao Rosalia, you will be in our hearts.
Veterans were always heroes to Ken. He interviewed many over the decades and amassed a library of historical records.
25 years of working together toward a common goal – offering Canadians the chance to go back to sites of great importance to our history. At the start, our travellers were mostly veterans; now, their family members, as well as people interested in learning more about where their forefathers fought for the common good and to preserve the freedom of countries overrun by their neighbour turned tyrant.
Ken got us into the business of offering military tours and we owe him a lot. The road has been one of many meaningful memories and experiences.
We will remember you, Ken. 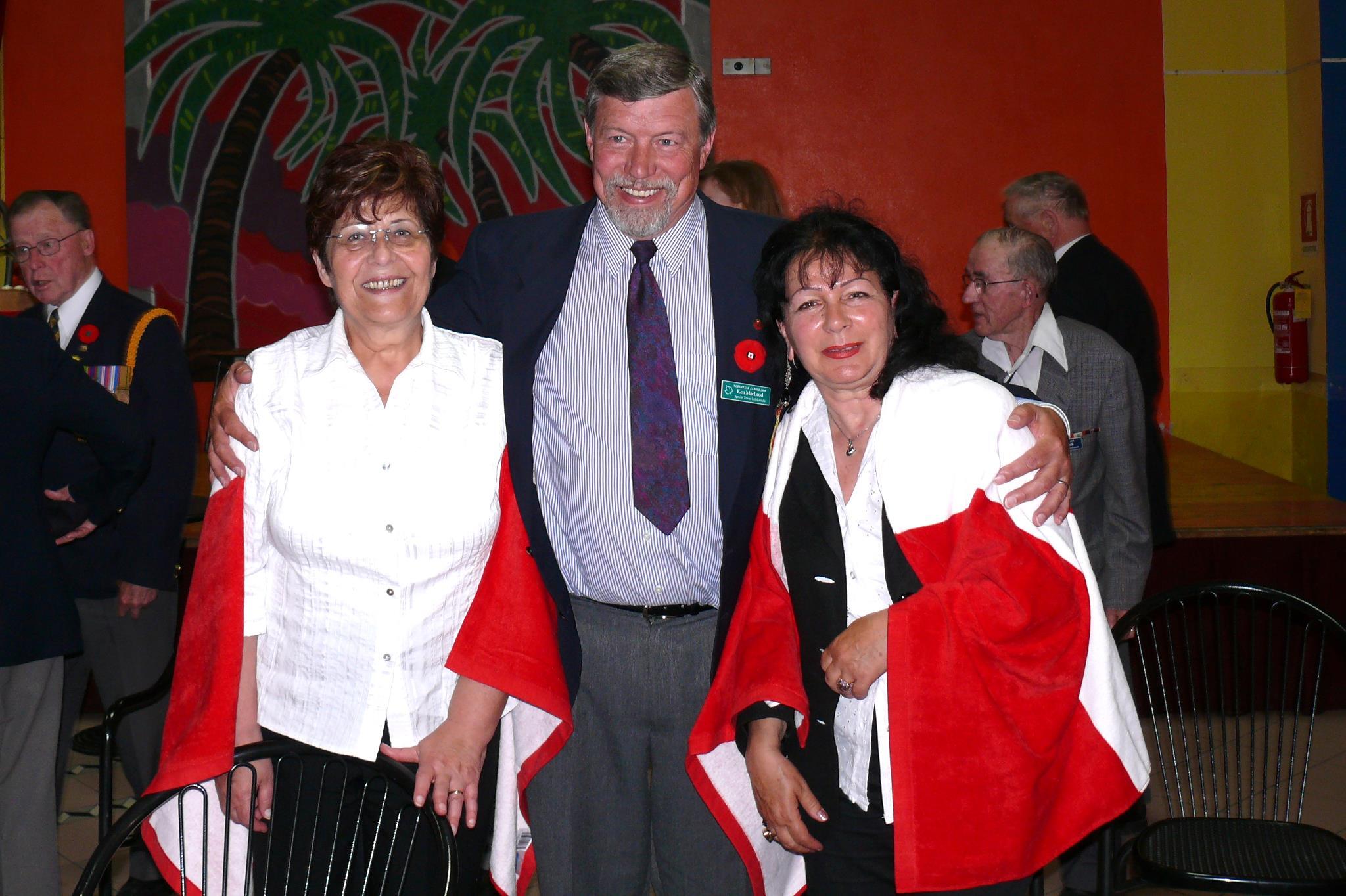 Ken MacLeod (middle) and Rosalia Fantoni (right) with a friend (left), helping to keep the memories alive in Villanova, 2012
On Remembrance Day, we would also like to share military history topics we covered in previous blog posts.
‘Our Fallen Heroes’ Tribute Film
Not to be forgotten – The 75th anniversary of the Liberation of the Netherlands and VE-Day and the 76th anniversary of D-Day
Sister Agnès - “the Angel of Dieppe”
Golf Along the Landing Beaches of Normandy
Juno Beach: The Ultimate Canadian Pilgrimage
Video: Normandy WW2 Landing Beaches
These posts are all available on our BLOG.
Please check our website for details on Special Travel International’s military history tours to Belgium, Holland, Northern France and Italy:
NW Europe and the Liberation of Holland (April 25 – May 10, 2022)
Liberation of Holland & Belgium (April 27 – May 10, 2022)
Italian Campaign – Ken MacLeod Memorial Tour (June 6–19, 2022)