Quirky Christmas Traditions From Around The World

Towards the end of November, countries across the world start preparing for the Christmas season. While homes and fir trees are decorated with lights and people rush to buy gifts for their loved ones, countries across the globe celebrate the festive time with their own unique customs, traditions and stories. Here are some of the quirkiest Christmas traditions from around the world.
The Yule Goat – Sweden
The Yule Goat is a longstanding Christmas tradition in Scandinavia and Northern Europe. The goat started out as a visitor who checked in to see when the Christmas celebrations were over, but through the years it evolved into a Santa-like figure who gave out presents on Christmas Eve. Today, particularly in Sweden, large straw versions of the goat are erected in towns across the county. The village of Gävle is famous for its unlucky goat, which has been burned down by vandals more often than it has survived since it was first erected in 1966.
Hide your broom – Norway
Norwegians once believed that witches and evil spirits would come out on Christmas Eve, and families started hiding their brooms, mops and brushes before going to bed on Christmas Eve so that the witches couldn’t steal them. Sometimes, spruce logs are burned in the fireplace to prevent witches from coming down the chimney, and men occasionally fire shotguns into the air outside to scare off evil spirits. 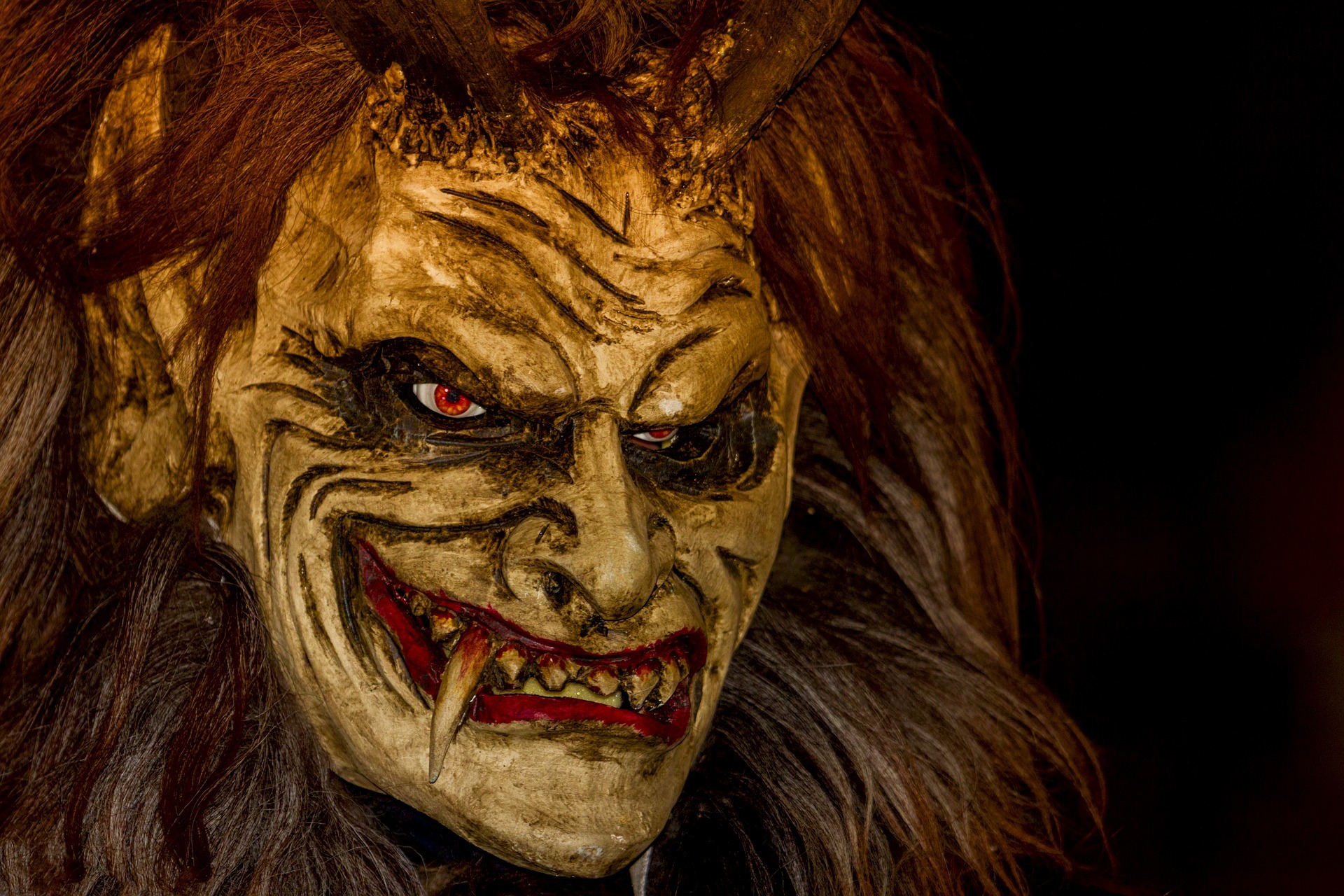 Krampus
Krampus – Southern Germany and Austria
Krampus is a half-goat, half-demon being who carries a wicker basket on his back. This basket is quite unlike Santa’s sack, however, as the mystical creature is out to fill his crate with badly behaved children and take them to the underworld. The scary figure is a well-known part of holiday folklore in countries between Hungary and northern Italy, particularly in Austria and southern Germany. Many cities have an annual Krampuslauf, during which men dressed as Krampus run through the streets carrying torches. Krampus parties are starting to become popular in the USA, with celebrations taking place in cities such as New York and Portland.
Mass of the Rooster – Bolivia
Christmas Mass in Bolivia is quite the spectacle. An old story has it that the night Jesus Christ was born, a rooster crowed at around midnight to announce the birth. In acknowledgement of this belief, Bolivians flock to church to celebrate Misa del Gallo – ‘Mass of the Rooster’.
Throw a shoe – Czech Republic
There are a number of Christmas traditions in the Czech Republic that are said to predict whether a woman will get married in the following year. On Christmas Day, an unmarried woman throws a shoe over her shoulder, towards the front door. If the shoe lands with the toe pointing towards the door, she will marry within the next year, but if the heel looks towards the door, she will remain single for another year. 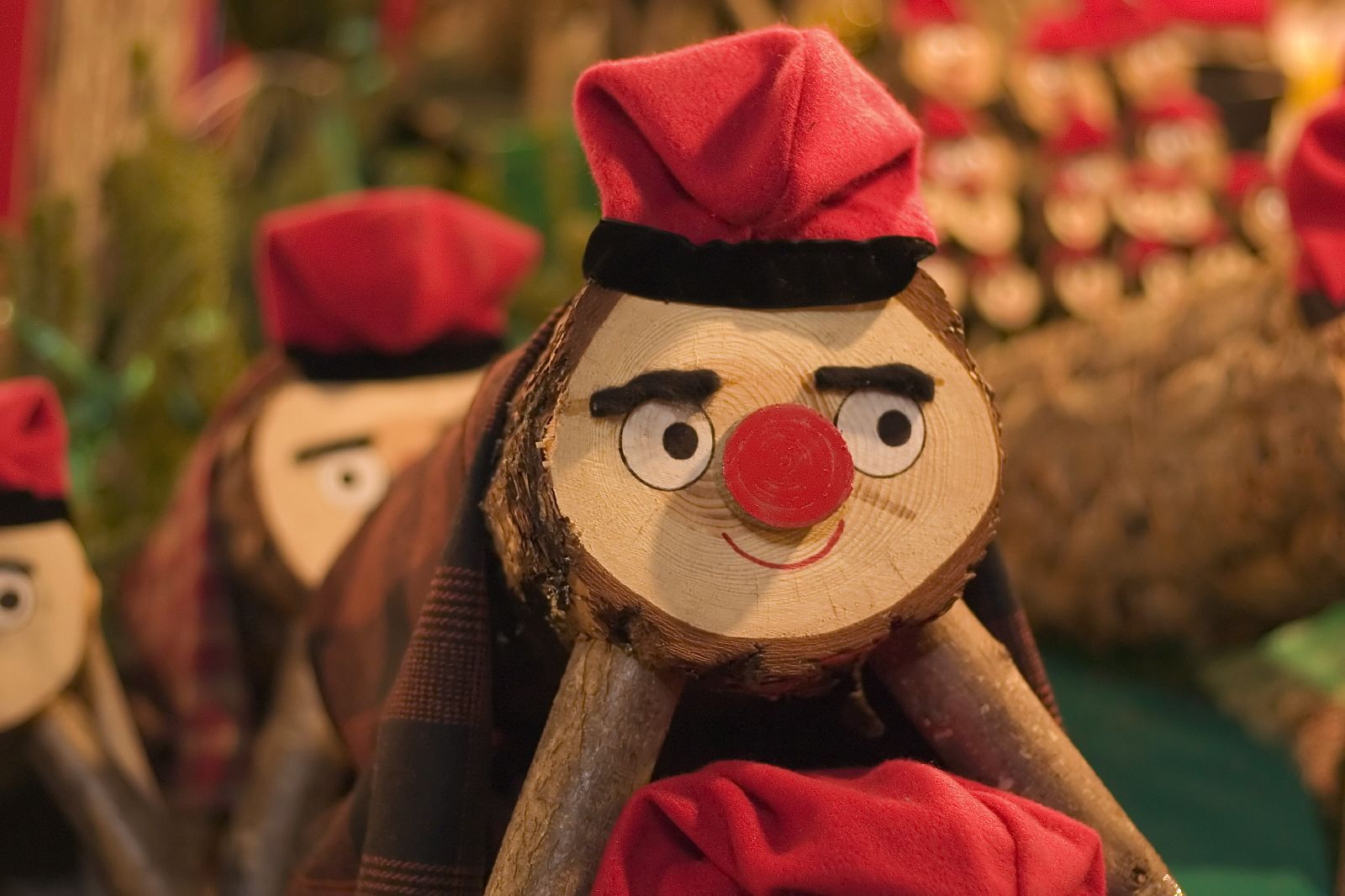 Caga Tió, Catalonia © Greg Gladman
The defecator and Tió de Nadal – Spain
The Caganer is an elf-like male figure that frequently shows up in Catalan nativity scenes and is depicted with his pants rolled down, living up to his name, which means ‘the defecator’. Surprisingly, the Caganer is a symbol of good luck, as his stool is believed to fertilize the land and promote a good harvest the following year. In Catalonia, Tió De Nadal is the Catalan Poop Log, an exceptionally unique Christmas tradition in this part of Spain. Crafted by hand, this little wooden character made of a stick and art supplies is treated kindly from December 8 to 24 when children offer him nuts, fruit and cover him in a blanket for warmth. On Christmas Eve, they beat him with sticks while singing a traditional song. Following the beating they lift up the blanket to reveal the log has pooped a pile of candy for their enjoyment.
A gift-bringing witch – Italy
In Italy, children are visited by Santa Claus (Babbo Natale) on Christmas Eve, but also by La Befana on January 5, the eve of the Epiphany. According to the legend, the witch turned down an invitation from the Three Wise Men to visit baby Jesus in the manger, and quickly regretted her decision. The story says that she still flies around looking for baby Jesus and giving gifts to children to make up for her mistake. Children often put out a glass of wine and some food for her.
KFC Christmas feast – Japan
Christmas isn’t a national holiday in Japan, but Japanese people do have their unique version of Christmas Eve dinner. Thanks to a wildly successful marketing campaign in the 1970s, Japan has come to associate Christmas Eve with Kentucky Fried Chicken. According to the story, KFC got the idea from an expat customer who bought KFC chicken for a holiday party, as turkey isn’t widely available in Japan. The company ran with the concept, marketing its chicken as a traditional meal for the festive season. Over the years, the idea has somehow grown beyond a commercial campaign to become a firmly established holiday tradition.
Rosca de Reyes – Mexico
January 6, King’s Day, marks the Three Wise Men’s visit to baby Jesus. Mexicans celebrate the holiday with a ring-shaped sweet pastry with candied fruits called Rosca de Reyes. Each loaf has a Jesus figurine baked into it, and tradition says that whoever finds the small toy within their piece is to host a party on Candlemas Day (February 2) and serve the traditional tamales.
﻿Mummers in disguise – Latvia
In Latvia, mummers (amateur actors) dress up as animals such as cranes, goats, wolves, bears or horses, or as macabre characters that symbolise death. The mummers are required to stay incognito, cover their faces with masks and disguise their voices to ensure that no one in their neighbourhood recognizes them. They go from house to house to drive evil spirits away with music and traditional songs. Families welcome them into their homes and offer them food and drinks in return. Should they identify a person regardless of their disguise, the mummer has to uncover their face. 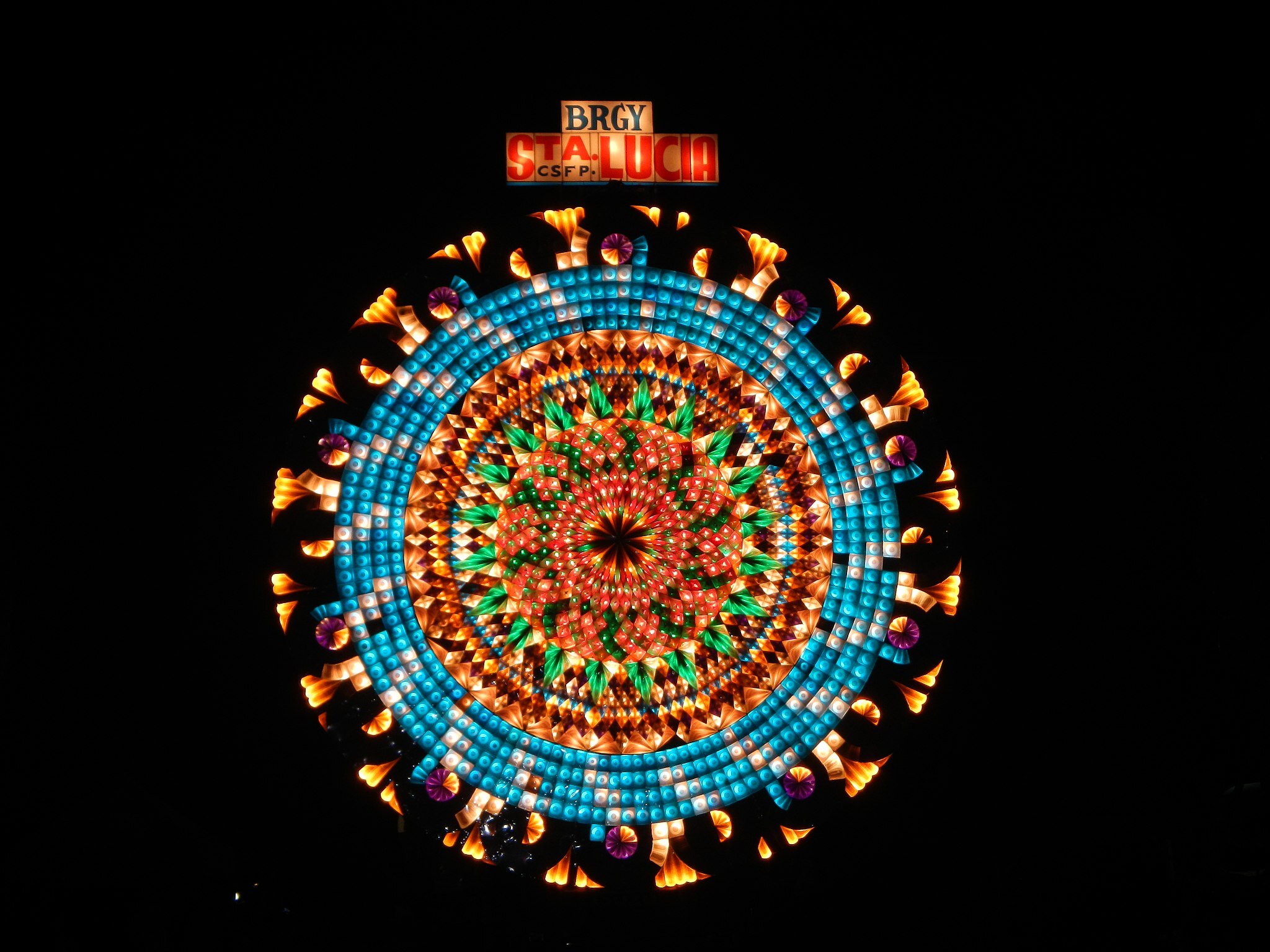 Giant Lantern Festival, Philippines © Ramon FVelasquez
Giant Lantern Festival – Philippines
On the Saturday before Christmas Eve, San Fernando in the Philippines spreads the message of light and hope with Ligligan Parul, the Giant Lantern Festival. The festival is rooted in the early 20th century and has widely grown in popularity. Today, several villages participate and compete to build the most beautiful lantern. They measure almost six metres (20 feet) in diameter and are constructed of bamboo or steel frames, handmade paper and up to 5,000 light bulbs, which are arranged in intricate patterns and shine in mesmerizingly vivid colours.
Santas 'sleigh' the waves – Australia
In much of the world, Christmas is synonymous with snow and cold weather. In Australia, it's summer, and Christmas traditions play out across a backdrop of sunshine and barbecues. Christmas down under means sun, sea and… surf. Head to Bondi Beach and you will likely spot surfers catching the swell while wearing Santa hats. In fact, back in 2015, a group of Australian locals broke the world record for the largest Santa surf lesson. 320 locals, all dressed in Santa outfits, gathered on the infamous beach and raised thousands of dollars for a surfing and mental health charity. 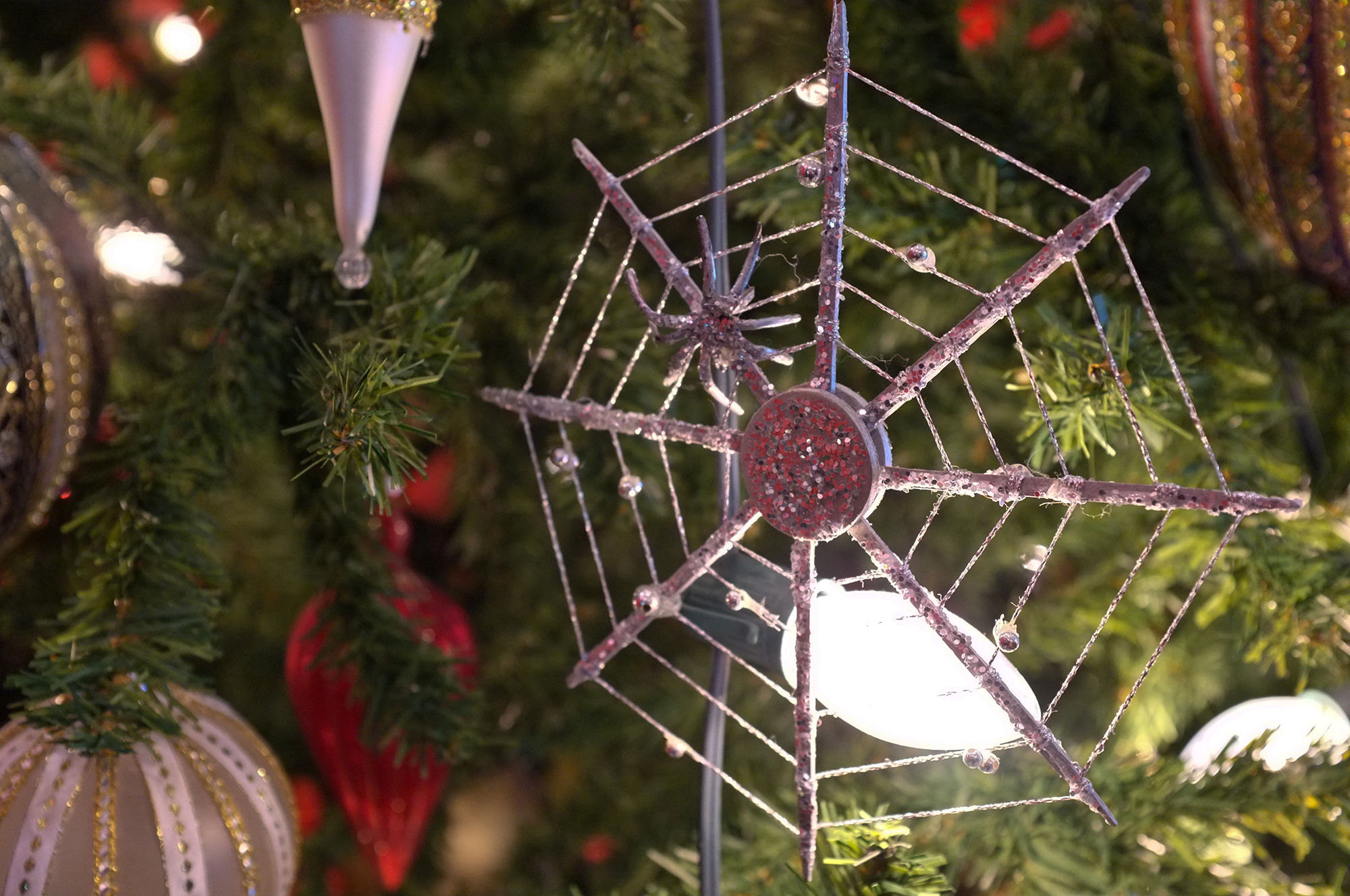 Christmas tree, Ukraine © Marty Gabel
The spider brings luck – Ukraine
According to an old Ukrainian saga, a poor widow and her children once found a Christmas tree growing in their yard but didn’t have any money to decorate it. They put the tree inside their home, and when they woke up on Christmas morning, a spider’s web covered the tree. The youngest child opened a window and daylight shone on the web, turning it into silver and gold. In honour of this legend, Ukrainian people often decorate their trees with plastic spiders and webs. To see a spider web on Christmas morning is said to bring good luck.
13 Yule lads – Iceland
In Iceland, 13 Yule lads carry out the role of Santa Claus. One the lads visits children on each of the 13 days leading up to Christmas, and each lad has a different personality. Children place a shoe in their bedroom window each evening, and if they’ve been well behaved, the Yule lad visiting that night will leave candy or small gifts. The lads were historically depicted as somewhat frightening, leaving rotting potatoes for naughty children, but their image has softened over the years.
Please check our website for details on Special Travel International’s future tours:
https://www.sticanada.com/
On the Horizon for 2024-25