The origins of our species have long been traced to East Africa, where the world’s oldest undisputed Homo sapiens fossils were discovered. Olduvai Gorge, in Tanzania, holds the earliest evidence of the existence of human ancestors. Paleoanthropologists have found hundreds of fossilized bones and stone tools in the area dating back millions of years, leading them to conclude that humans evolved in Africa.
Located in the Great Rift Valley, between the Ngorongoro Crater and the Serengeti National Park, Olduvai Gorge was formed about 30,000 years ago – the result of aggressive geological activity and streams. The steep ravine is about 48.2 km long and 89.9 metres deep, not quite large enough to be classified as a canyon. A river cuts through several layers to form four individual beds, with the oldest estimated at about 2 million years old. 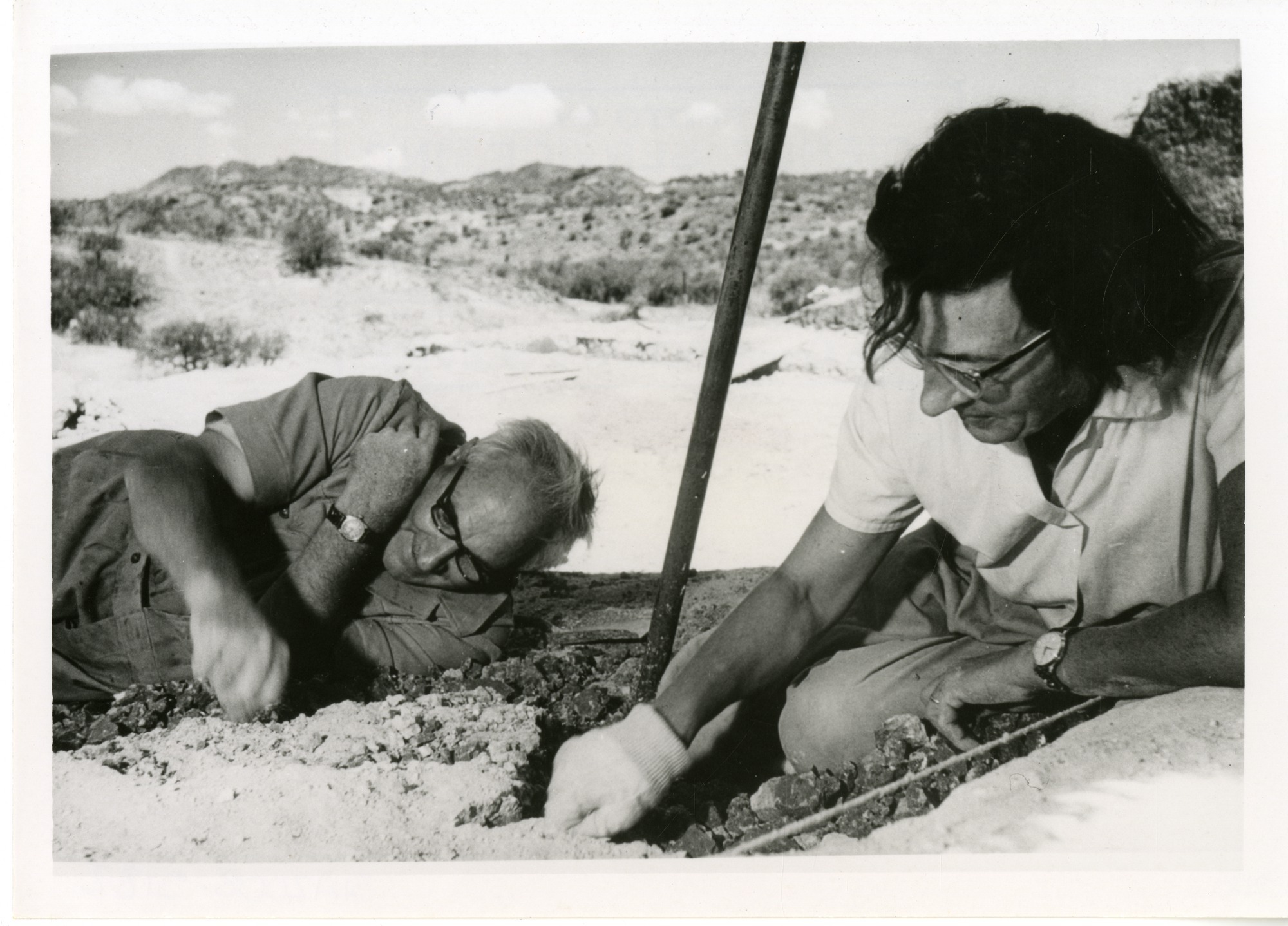 Mary & Louis Leakey, digging at Olduvai Gorge, Tanzania
Louis and Mary Leakey are often referred to as the first family of paleontology, as much of their lives, and later the lives of their children revolved around Olduvai Gorge. The couple met on a dig in England, and both worked briefly at the Olduvai Gorge before being married in England in 1937. In the 1930s, the Leakeys found stone tools in Olduvai and elsewhere. Among their most notable finds were several extinct vertebrates, including the 25-million-year-old Pronconsul primate, one of the first and few fossil ape skulls discovered. Political unrest in nearby Kenya forced them to put their work on hold, but they went back to Olduvai Gorge in the late 1950s. While they had focused on tools in their previous work at the gorge, they went back to look for further evidence of human life.
One day in 1959, Mary discovered fossilized parts of a skull and upper teeth of a type of hominin that had not been previously identified. Over the next several weeks, the Leakeys uncovered about 400 pieces of a nearly complete skull. There were similarities to other discoveries, including those in South Africa by Raymond Dart in 1924 and by Robert Broom in 1936. However, the Leakeys classified their find a new category of hominin, dubbing it Zinjanthropus boisei. 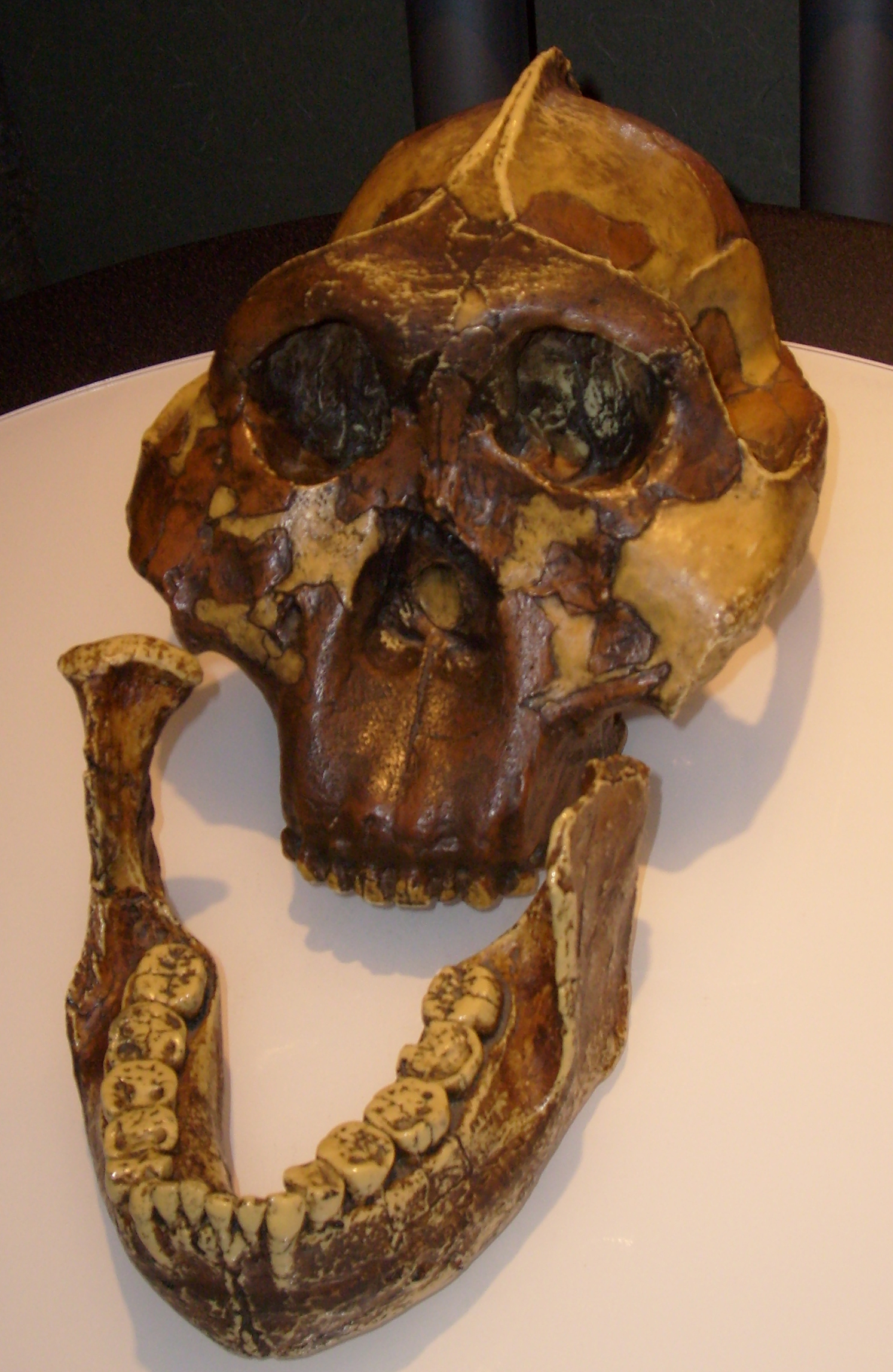 Replica Paranthropus boisei skull © Durova
It was not the direct ancestor of humankind that the Leakeys had hoped for, but it brought the couple some notoriety and spurred public interest in the study of human origins. They dated the discovery as having lived 1.75 million years ago. This made it the oldest hominid discovered to that point, although a lack of fossil-dating technology made it difficult to determine the age of Dart’s and Broom’s earlier finds. The combination of the works of the Leakeys, Dart and Broom made a convincing case that humans originally evolved in Africa.
By 1960, Louis Leakey had become ill and Mary took over most of the operation. There were a number of developments during this period. They uncovered a well-preserved fossil foot that had arches, giving credence to the theory that hominids walked upright.
During this time, Mary Leakey and son Jonathan found another, smaller form of hominin that they called Homo habilis, translated as 'handy human' because it seemed he was able to use tools. This fossil was dated at about 2 million years old. This was confirmed when another son, Richard, discovered another Homo habilis in 1972. This 1972 discovery also supported the elder Leakey's theory that there were several lines of hominins developing simultaneously and that the Homo genus did not evolve from Australopithecus.
Meanwhile, others had begun searching for fossil bones in Africa. After Louis Leakey died of a heart attack in 1972, Mary Leakey continued working at Olduvai Gorge; however, the next spectacular find occurred in the Ethiopian part of the Great Rift Valley, at Afar. In 1974, Donald Johanson, an archaeologist from Cleveland, Ohio, found parts of a skeleton there that dated back 3.2 million years – the oldest hominine bones yet discovered. Johanson nicknamed the skeleton “Lucy”, because that night, as he and the others in camp celebrated their discovery, they listened repeatedly to the Beatles’ song “Lucy in the Sky with Diamonds.”
Lucy was assumed to be female because the bones were of a small hominine, roughly 104-106 cm tall. Only about 20 percent of a full skeleton was found, and most of the skull was missing. Fragments suggest it was small, while the foot, leg and pelvis bones showed that Lucy walked upright. This was important evidence that, in the human line, bipedalism came earlier than brain growth, which previously had been supposed to come first.
The evidence found in east Africa has revealed a great deal about society and the early development of human society from millions of years ago. Olduvai Gorge was designated part of a UNESCO World Heritage site in 1979. It has often been called the “Cradle of Mankind”. When life throws challenges at us, it can be easy to forget where we come from, and that we are all one family.
Please check our website for details on Special Travel International’s future tours to Africa – and more:
https://www.sticanada.com/
On the Horizon for 2024-25