King Ludwig II of Bavaria: his Castles and Wagner

Born at Nymphenburg Palace, located in suburban Munich, he was the elder son of The Crown Prince and Crown Princess of Bavaria, who became King and Queen in 1848 after the abdication of the former's father, Ludwig I, during the German Revolution. Ludwig's childhood years did have happy moments. He lived for much of the time at Castle Hohenschwangau, a fantasy castle his father had built near the Alpsee (Alp Lake), near Füssen. It was decorated in the Gothic Revival style with many frescoes depicting heroic German sagas.
Crown Prince Ludwig was in his 19th year when his father died after a three-day illness, and he ascended the Bavarian throne. Although he was not prepared for high office, his youth and brooding good looks made him popular in Bavaria and elsewhere. He continued the state policies of his father and retained his ministers. His real interests were in art, music and architecture. One of the first acts of his reign, a few months after his accession, was to summon Wagner to his court. Also in 1864, he laid the foundation stone of a new Court Theatre, now the Staatstheater am Gärtnerplatz. After 1871, Ludwig largely withdrew from politics and devoted himself to his personal creative projects, most famously his castles, for which he personally approved every detail of the architecture, decoration and furnishing. 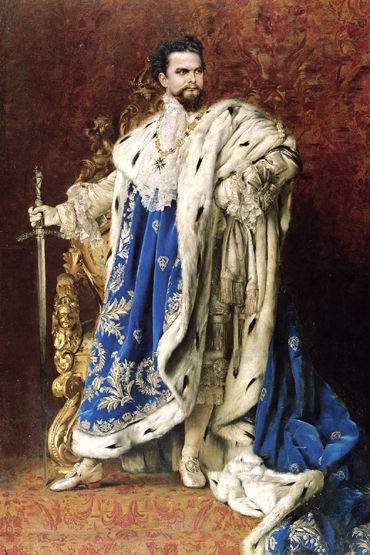 King Ludwig II - Portrait by Gabriel Schachinger, 1887
LUDWIG AND WAGNER
Ludwig was intensely interested in the operas of Richard Wagner. This interest began when Ludwig first saw Lohengrin at the impressionable age of 15, followed by Tannhäuser ten months later. Wagner's operas appealed to the king's fantasy-filled imagination. Wagner had a notorious reputation as a political radical and philanderer and was constantly on the run from creditors. However, on May 4, 1864, the 51-year-old Wagner was given an unprecedented 1¾ hour audience with Ludwig in the Royal Palace in Munich; later, the composer wrote of his first meeting with Ludwig: “Alas, he is so handsome and wise, soulful and lovely, that I fear that his life must melt away in this vulgar world like a fleeting dream of the gods.” Ludwig was probably the savior of Wagner's career. Without Ludwig, it is doubtful that Wagner's later operas would have been composed, much less premiered at the prestigious Munich Royal Court Theatre (now the Bavarian State Opera).
A year after meeting the King, Wagner presented his latest work, Tristan und Isolde, in Munich – to great acclaim. However, the composer's perceived extravagant and scandalous behaviour in the capital was unsettling for the conservative people of Bavaria, and the King was forced to ask Wagner to leave the city six months later, in December 1865. Ludwig considered abdicating to follow Wagner, but Wagner persuaded him to stay. Ludwig provided the Tribschen residence for Wagner in Switzerland. Wagner completed Die Meistersinger there; it was premiered in Munich in 1868. When Wagner returned to his “Ring Cycle”, Ludwig demanded 'special previews' of the first two works (Das Rheingold and Die Walküre) at Munich in 1869 and 1870. Wagner, however, was now planning his great personal opera house at Bayreuth. Ludwig initially refused to support the grandiose project. However, when Wagner exhausted all other sources, he appealed to Ludwig, who loaned him 100,000 thalers to complete the work. Ludwig also paid for the Wahnfried villa for Wagner and his family to reside in. In 1876, Ludwig attended the dress rehearsal and third public performance of the complete Ring Cycle at the Festspielhaus.
The so-called 'Swan King' is also said to have inspired the story behind the classical ballet Swan Lake by Russian composer Tchaikovsky. This could be referenced to the days of his childhood when he spent much of his youth in a castle named Hohenschwangau ('high region of the swan') in the Bavarian Alps. Ludwig grew up there among swan images and icons, and the nearby Schwansee ('Swan Lake'). 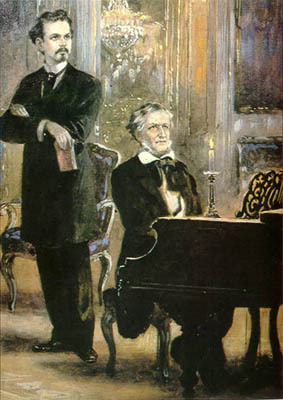 King Ludwig II and Richard Wagner
LUDWIG AND HIS CASTLES
Ludwig used his personal fortune to fund the construction of a series of elaborate castles. In 1867, he visited Eugène Viollet-le-Duc’s work at Pierrefonds, and the Palace of Versailles in France, as well as the Wartburg near Eisenach in Thuringia, which largely influenced the style of his construction. In his letters, Ludwig marvelled at how the French had magnificently built up and glorified their culture (e.g. architecture, art and music) and how miserably lacking Bavaria was in comparison. It became his dream to accomplish the same for Bavaria. These projects provided employment for many hundreds of local laborers and artisans and brought a considerable flow of money to the relatively poor regions where his castles were built. In 1868, Ludwig commissioned the first drawings for his buildings, starting with Neuschwanstein and Herrenchiemsee, though work on the latter did not commence until 1878.
Neuschwanstein
Schloss Neuschwanstein ('New Swanstone Castle') is a dramatic Romanesque fortress with soaring fairy-tale towers. It is situated on an Alpine crag above Ludwig's childhood home, Castle Hohenschwangau ('Upper Swan County Palace'). Hohenschwangau was a medieval knights' castle which his parents had purchased. Ludwig reputedly had seen the location and conceived of building a castle there while still a boy. In 1869, Ludwig oversaw the laying of the cornerstone for Schloss Neuschwanstein on a breathtaking mountaintop site. The walls of Neuschwanstein are decorated with frescoes depicting scenes from the legends used in Wagner's operas, including Tannhäuser, Tristan und Isolde, Lohengrin, Parsifal, and the somewhat less than mystic Die Meistersinger. Neuschwanstein Castle is a landmark well known by many non-Germans and was used by Walt Disney in the 20th century as the inspiration for the Sleeping Beauty castles at Disney Parks around the world. 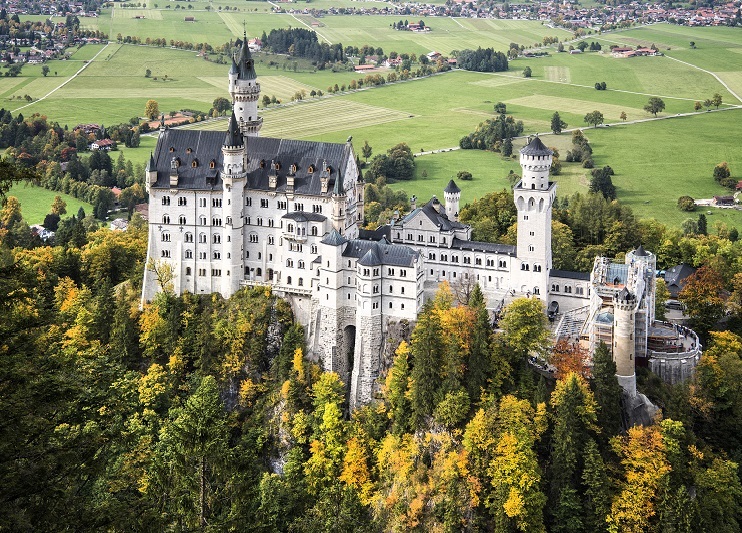 Neuschwanstein © Florian Trykowski, GNTB
Linderhof
In 1878, construction was completed on Ludwig's Schloss Linderhof, an ornate palace in neo-French Rococo style, with handsome formal gardens. The grounds contained a Venus grotto lit by electricity, where Ludwig was rowed in a boat shaped like a shell. After seeing the Bayreuth performances, Ludwig built Hundinghütte ('Hunding's Hut', based on the stage set of the first act of Wagner's Die Walküre) in the forest near Linderhof, complete with an artificial tree and a sword embedded in it. (In Die Walküre, Siegmund pulls the sword from the tree.) Hunding's Hut was destroyed in 1945 but a replica was constructed at Linderhof in 1990. In 1877, Ludwig had Einsiedlei des Gurnemanz (a small hermitage, as seen in the third act of Parsifal) erected near Hunding's Hut, with a meadow of spring flowers. The king would retire to read. (A replica made in 2000 can now be seen in the park at Linderhof.) Nearby a Moroccan House, purchased at the Paris World Fair in 1878, was erected alongside the mountain road. Sold in 1891 and taken to Oberammergau, it was purchased by the government in 1980 and re-erected in the park at Linderhof after extensive restoration. Inside the palace, iconography reflected Ludwig's fascination with the absolutist government of Ancien Régime of France. Ludwig saw himself as the 'Moon King', a romantic shadow of the earlier 'Sun King', Louis XIV of France. From Linderhof, Ludwig enjoyed moonlit sleigh rides in an elaborate 18th-century sleigh, complete with footmen in 18th-century livery. 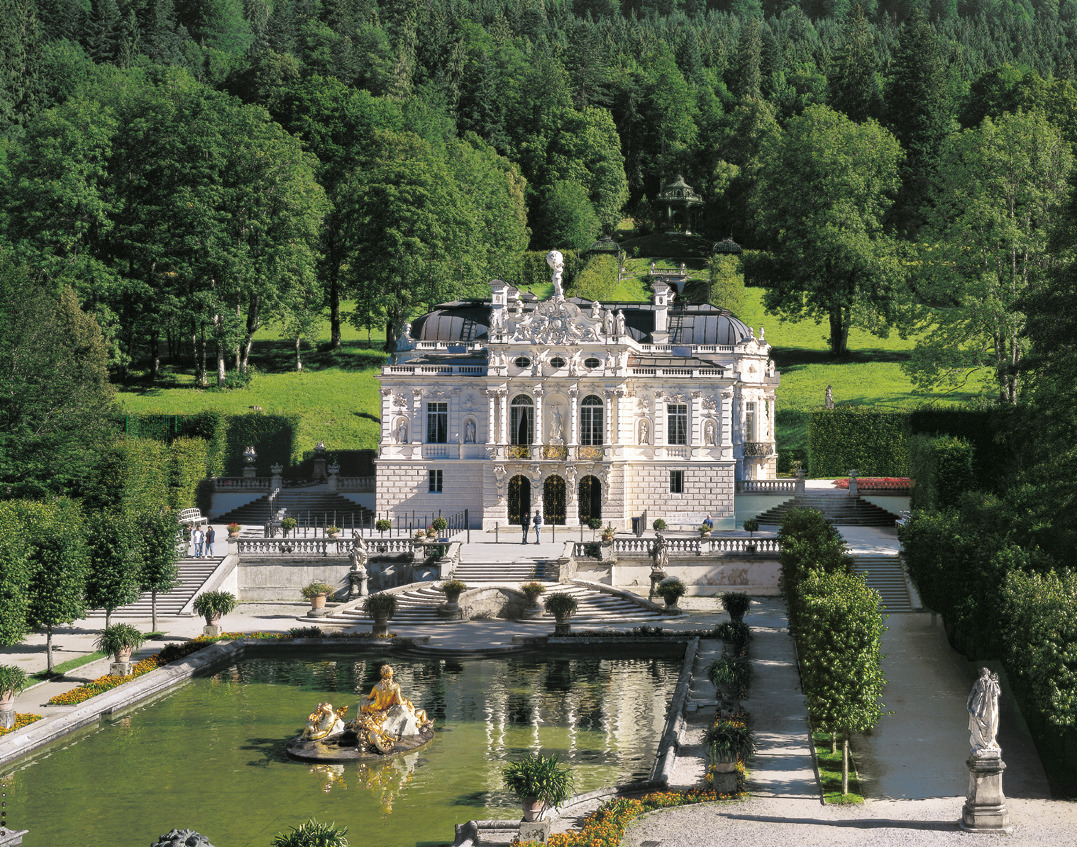 Linderhof Palace © Siehe Bildquelle, Bayerische Schlösserverwaltung
Herrenchiemsee
In 1878, construction began on Herrenchiemsee, a partial replica of the palace at Versailles, sited on the Herreninsel in the Chiemsee. It was built as Ludwig's tribute to Louis XIV of France. Only the central portion of the palace was built; all construction halted on Ludwig's death. What exists of Herrenchiemsee comprises 8,366 sqm (90,050 sq ft), a 'copy in miniature' compared with Versailles' 551,112 sq. ft. 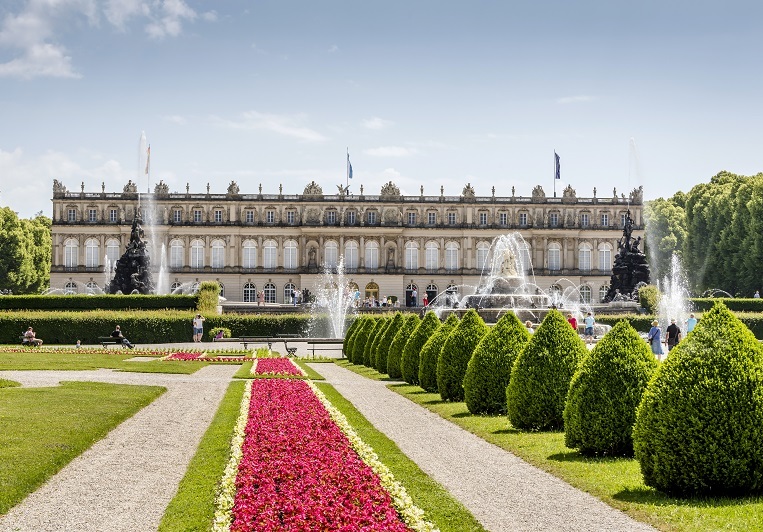 Herrenchiemsee © Günter Standl, GNTB
Munich Residenz Palace royal apartment
Ludwig also finished the construction of the royal apartment in the Residenz Palace in Munich, to which he had added an opulent conservatory or winter garden on the palace roof. It was started in 1867 as quite a small structure but was extended in 1868 and 1871. It featured an ornamental lake complete with skiff, a painted panorama of the Himalayas as a backdrop, an Indian fisher-hut of bamboo, a Moorish kiosk and an exotic tent. The roof was a technically advanced metal and glass construction.
Later projects
In the 1880s, Ludwig continued his elaborate schemes. He planned the construction of a new castle on Falkenstein ('Falcon Rock') near Pfronten in the Allgäu. Ludwig also proposed a Byzantine palace in the Graswangtal and a Chinese summer palace by the Plansee in Tyrol. These projects never got beyond initial plans. For Berg Castle, Ludwig had a fifth tower constructed for it called 'Isolde' and used the castle frequently as his summer residence. When Empress Maria Alexandrovna of Russia visited Berg in 1868, he had the castle magnificently decorated for the duration of her stay there; the castle otherwise, by his standards, was modestly furnished.
Ludwig II left behind a large collection of plans and designs for other castles that were never built, as well as plans for further rooms in his completed buildings. Many of these designs are housed today in the King Ludwig II Museum at Herrenchiemsee Castle. These building designs date from the latter part of the King's reign, beginning around 1883. As money was starting to run out, the artists knew that their designs would never be executed. The designs became more extravagant and numerous as the artists realized that there was no need to concern themselves with economy or practicality.
Follow King Ludwig’s legacy of extravagant castles on Special Travel International’s tours:
The Scenic Austrian Alps and Oberammergau Passion Play (Sep 11–25, 2020)
A German Passion (Sep 13–25, 2020)
Watch for one of the next newsletters: King Ludwig II of Bavaria – Tragic and Mysterious.
﻿
On the Horizon for 2022-23