In Tibet sticking out your tongue can be a way of welcoming people. In New Zealand, Maori greet each other by touching noses. Ethiopian men touch shoulders, and in the Democratic Republic of Congo, male friends touch foreheads. In many Asian countries, people bow to each other when meeting. And in some European countries, as well as Arab countries, hugs or kisses on the cheek are more the norm.
While this wasn’t always true, the most common physical way to greet people around the world is now the handshake, closely followed by high fives and fist bumps. But how did these gestures originate in the first place?
The handshake dates back the farthest. Archaeological relics suggest that handshakes were practiced in ancient Greece in the 5th century B.C. It was a symbol of peace, showing that you were not carrying a weapon. In Berlin’s Pergamon Museum, the most-visited in Germany, a 5th-century funereal relic shows two soldiers shaking hands. At the Acropolis in Athens, Greece, a 5th-century stone slab depicts Hera and Athena shaking hands. The Greek poet Homer describes handshaking several times as displays of trust in his epics The Odyssey and The Iliad. 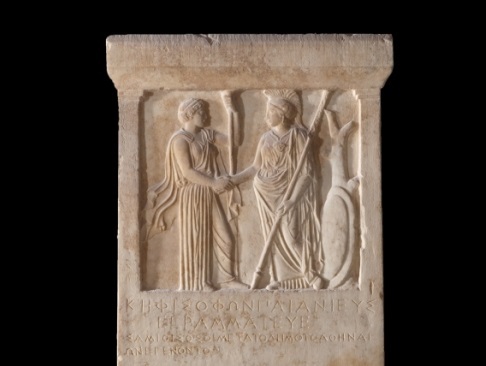 Athena & Hera handshaking, late 5th century BC - Acropolis Museum, Athens
During the Roman era, the handshake evolved to more of an arm grab. Knights in Medieval Europe may have added the shaking of hands up and down as a clever way to dislodge any hidden weapons.
Some historians suggest that modern-day handshaking became popularized by 17th-century Quakers, who believed the gesture to be more egalitarian than a hat tip or a bow. In some 17th-century marriage portraits, the husband and wife are seen shaking hands as a symbol of their legally binding commitment. By the Victorian era, etiquette guides instructed that the handshake should be firm. While most English and Scandinavian countries prefer a firm handshake, in some countries too firm a grip is considered rude and aggressive. Some Asian countries prefer a more gentle touch.
In contrast with the ancient ritual of handshaking, the origins of the high five date back only to last century. And slapping five actually started not up high but down low. The low five has been a fixture of the African American culture since the Jazz Age, as a response to “slap me some skin.” In the 1927 movie The Jazz Singer, Al Jolson slaps low fives to celebrate a Broadway audition.
It was Glenn Burke, an outfielder for the Los Angeles Dodgers, who did an impromptu high-five in front of fans in a game against the Houston Astros in October 1977. Burke held up his hand to greet teammate Dusty Baker, who was rounding the bases off his 30th home run. The high five became a thing with the L.A. Dodgers and soon sports at large.
The fist bump is the most modern invention. Like the high five, it has its origins in sports. Some trace it to the boxing ring, where opponents touch gloves before a match. Others point to basketball. In the 1970s, star Fred Campbell of the Baltimore Bullets popularized the gesture by giving it his own exuberant flair. In 2008, Barack Obama, who was notably passionate about basketball, brought the fist bump to political headlines when he bumped his wife, Michelle, after his nomination, prompting detractors to denounce it as a “terrorist fist jab.” The Washington Post called it “the fist bump heard ’round the world.” The Canadians were quick to embrace the fist bump, or “pound,” as a healthy alternative to germ-spreading handshake, especially during flu season. 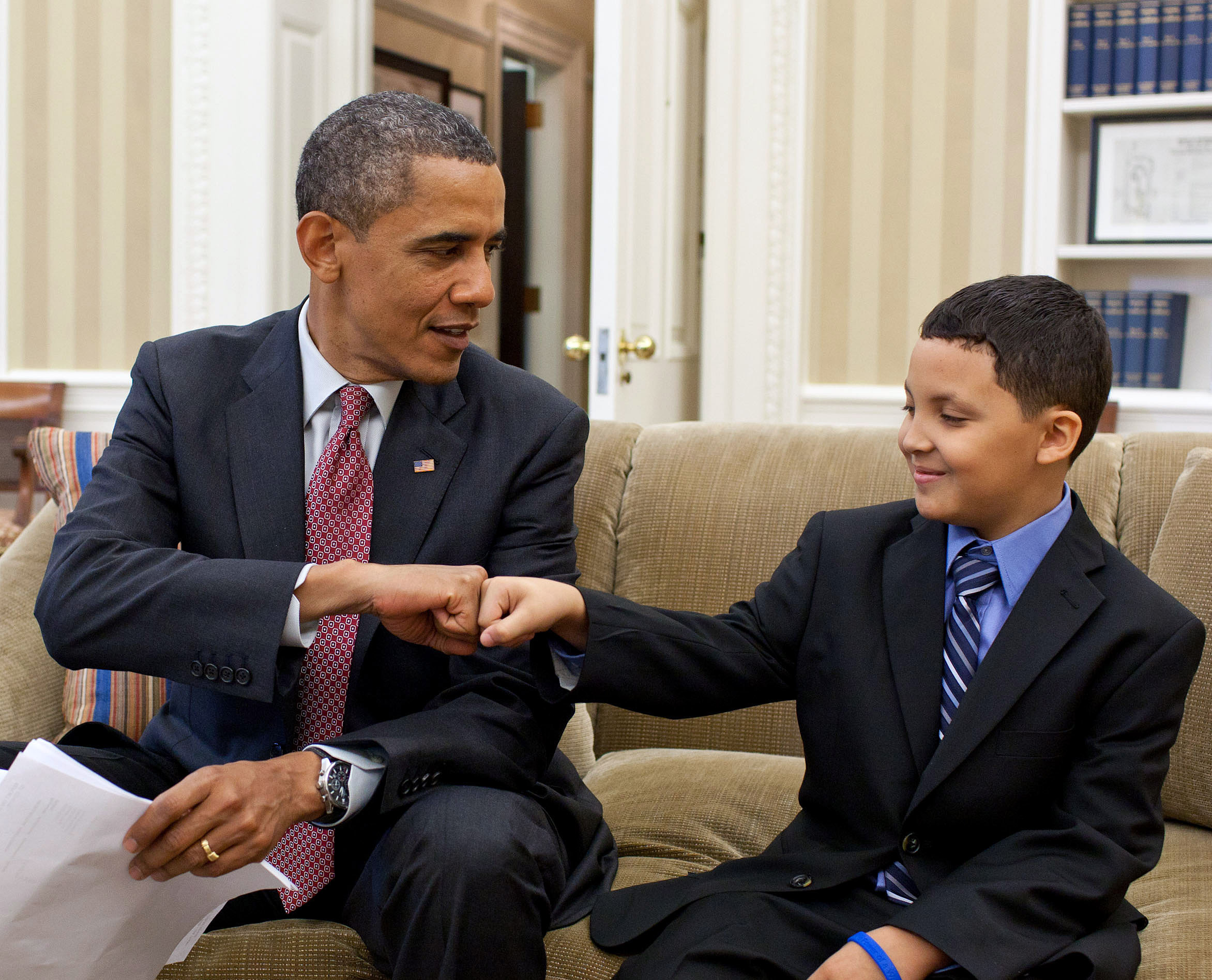 President Obama greets Make-a-Wish child Diego Diaz, June 2011
Whatever you choose – handshake, high five, fist bump – works just as well for departures, too. Goodbye!
Discover the origins of the handshake – and much more – on Special Travel International’s tour:
Highlights of Greece (Oct 4–18, 2020)
On the Horizon for 2022-23