Europe’s Historical Landmarks – Then and Now

Most of the world's most iconic sights only get better with age and stand out more when compared to the more minimalist creations of modern architecture. Some of them lean, one or two have gotten a little bit cracked over the years, and a few of them have a bus stop spoiling their view.
Standing strong throughout the years in the face of whatever else the world happens to throw at them, the magnificence of these buildings, bridges, streets and monuments has not faded over the years. Since borders cannot be crossed at the moment, we hope you enjoy your trip down distant-memory lane through these vintage photos of some of Europe’s most significant landmarks.
Frauenkirche, Dresden
The domed Frauenkirche – Dresden’s most beloved symbol – has literally risen from the city's ashes. The original church graced the skyline for two centuries before collapsing after the February 1945 bombing, and was rebuilt from a pile of rubble between 1994 and 2005. A spitting image of the original, today's structure may not bear the gravitas of age but that only slightly detracts from its beauty, inside and out.

Left: Frauenkirche, Dresden (1930) © Frankl, A
Right: Frauenkirche, Dresden (2011) © X-Weinzar
Palais Garnier, Paris
The Palais Garnier was built from 1860 to 1875 by architect Charles Garnier, at the request of Napoleon III. While cars and a metro station have replaced horse-drawn carriages in front of its ornate façade, the Opéra National de Paris still plays host to operas, ballets and recitals and was listed as a historical monument in 1923. In 1964 Marc Chagall covered the ceiling of the opera’s Italian Room with a now-iconic mural.

Left: Palais Garnier, Paris (1900)
Right: Palais Garnier, Paris (2016) © Nicolai Wolpert
Blois from the Loire, France
From left to right, one can see the St. Laumer Abbey, the church of St. Nicholas and the castle of Blois, one of the most famous castles of the Loire Valley, whose four grand wings were built during four distinct periods in French architecture – Gothic (13th century), Flamboyant Gothic (1498–1501), early Renaissance (1515–20) and Classical (1630s).

Left: Blois from the Loire (ca. 1900)
Right: Blois from the Loire (2020) © Nicolai Wolpert
Hofbräuhaus, Munich
Pictured in 1910, Munich’s Hofbräuhaus was the seat of the Bavarian tavern scene. Regulars had their own special tables and personalized beer steins that hung from the walls. While a lot has changed in Germany since the Hofbräuhaus first opened its door, the German tavern traditions are still alive; the exterior might have changed a little, but inside you can still find a wall of personalized beer steins. Wolfgang Amadeus Mozart lived around the block from the beer hall in the late 18th century. In a poem he wrote, Mozart claimed to have written the opera Idomeneo after several visits to the Hofbräuhaus fortified him for the task.

Left: Hofbräuhaus, Munich (1910)
Right: Hofbräuhaus, Munich (2017) © Münchener
Karl Johans Gate, Oslo
Karl Johans Gate is Oslo’s main boulevard leading from the Central Station through the central shopping district and up to the Royal Palace. The street was named in honor of King Charles III John. These pictures show that Karl Johan’s façade has changed relatively little since the turn of the century.

Left: Karl Johans Gate, Oslo (1899) © Axel Lindahl / www.nibio.no
Right: Karl Johans Gate, Oslo (2007) © Oskar Puschmann / www.nibio.no
Quai des Nations, Paris
The 1900 Paris Exposition was one of the most successful exhibitions of its kind, attracting more than 48 million visitors. Impressive monuments were erected for this purpose only. On the 'Quai des Nations' (today’s Quai d'Orsay) were found buildings representing the different nations, financed by them. From left to right, the United States, the Ottoman Empire, Bosnia-Herzegovina, Belgium, Germany, Spain and Monaco are represented on this section in the picture. They were all demolished after the exhibition. The Palais du Trocadero, on the other side of the river, was later replaced by the Chaillot Palace, which is still there today. Beside the Eiffel Tower, the only monument remaining in the newer image is the Passerelle Debilly (right), which was also constructed for the visitors of the 1900 Universal Exhibition. The spire next to the Eiffel Tower belongs to the American church, which was erected in 1931.

Left: Quai des Nations, Paris (1900) © Brooklyn Museum Archives
Right: Quai des Nations, Paris (2017) © Nicolai Wolpert
Hohenzollern Bridge and Cathedral, Cologne
The waters of the mighty Rhine split Cologne in half, and the city is united across a series of seven bridges, with none more splendid than the spans of the Hohenzollernbrücke, which stretch 410 metres across the river in three great steel arches. Almost as famous as Cologne’s twin-spired Gothic cathedral, this spectacular bridge was completed in 1911, with four railway lines joining Cologne to cities across Europe. German troops destroyed the bridge at the end of World War II in the face of advancing Allied soldiers but it rose phoenix-like once more in 1948. Today it is both a pedestrian and rail bridge with around 1,200 trains passing over it daily and pairs of equestrian bronzes punctuating both ends.

Left: Hohenzollern Bridge and Cathedral, Cologne (1945) © Bundesarchiv
Right: Hohenzollern Bridge and Cathedral, Cologne (2010) © Frank
Leaning Tower and Cathedral, Pisa
The tower began to lean during construction in the 12th century, due to soft ground which could not properly support the structure's weight. The tilt worsened through the completion of construction in the 14th century. In danger of collapse, the structure was stabilized by remedial work between 1993 and 2001. The top of the tower can now be reached by mounting the 294 steps which rise in the form of a spiral on the inner side of the tower walls. 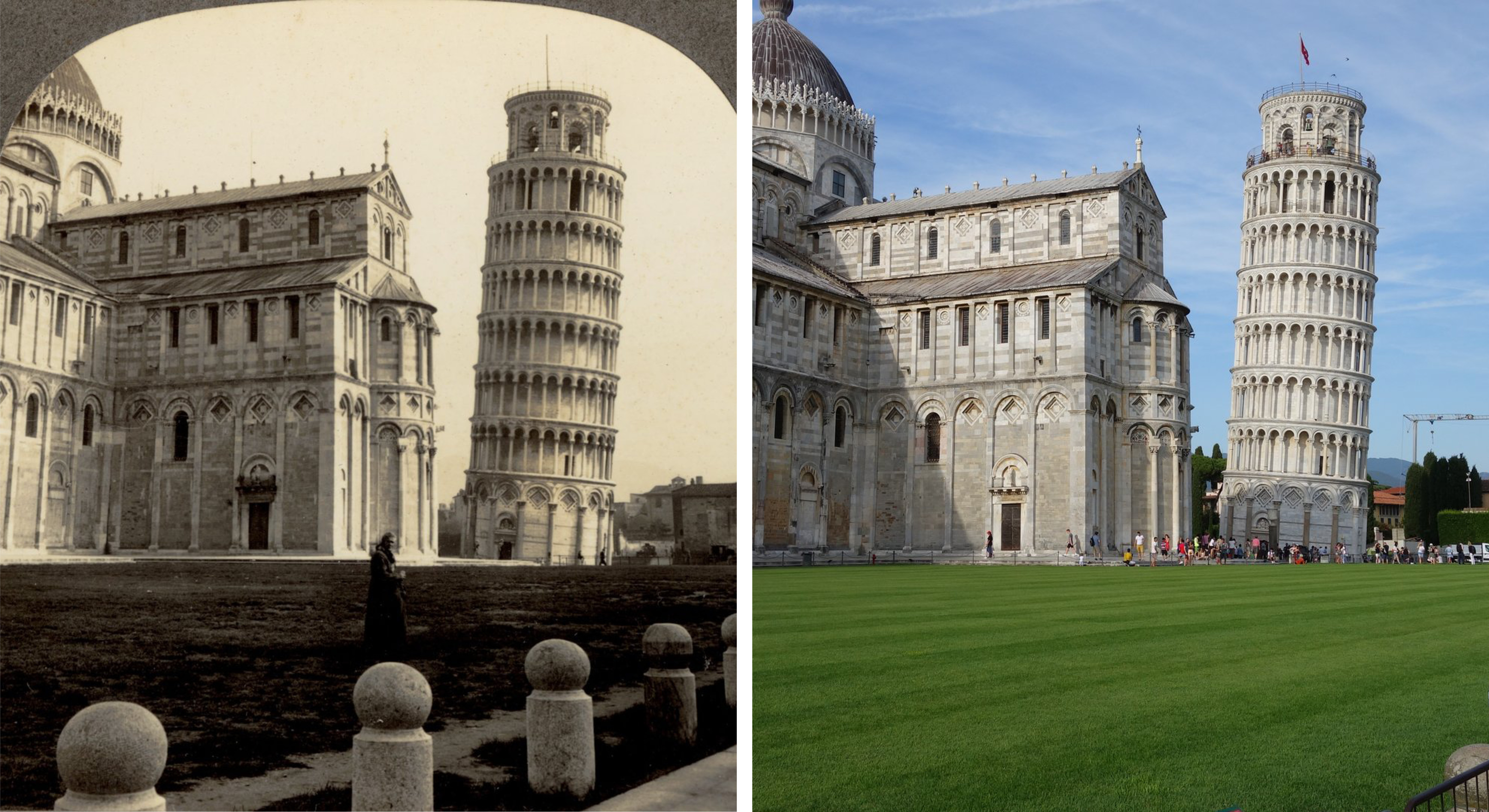 Left: Leaning Tower and Cathedral, Pisa (ca. 1900) © Digital Commonwealth
Right: Leaning Tower and Cathedral, Pisa (2019) © Nicolai Wolpert
Mont Saint-Michel, Normandy
Perched on a rocky islet in the midst of vast sandbanks exposed to powerful tides between Normandy and Brittany stand the Gothic-style Benedictine abbey dedicated to the archangel St Michael, and the village that grew up in the shadow of its great walls. Built between the 11th and 16th centuries, the abbey is a technical and artistic tour de force, having had to adapt to the problems posed by this unique natural site. Back in 1908, see horses, carts, and even steam locomotives travelling to and from Mont Saint-Michel were a common sight. The railway tracks were covered by water during high tide and became unmanageable, and were removed in 1944. In 2014 a new bridge, as well as a hydraulic dam, were constructed to prevent the silting-up of the bay.

Left: Mont Saint-Michel, Normandy (1908) © Frank Spencer Presbrey
Right: Mont Saint-Michel, Normandy (2016)
Ponte Vecchio, Florence
Ponte Vecchio is the oldest bridge of the city. Originally, butchers and tanners occupied the houses on the bridge, throwing their stinking waste into the Arno River. To clean up the bridge, a decree that excluded butchers from Ponte Vecchio was made in 1595 – only goldsmiths and jewellers were allowed. The decree is still in effect to this day.

Left: Rue du Luxembourg, Brussels (ca. 1910)
Right: Rue du Luxembourg, Brussels (2017) © Thomas Schlesser
Eiffel Tower, Paris
The 1900 Paris Exposition took place from April 14 to November 12, 1900 to celebrate the achievements of the past century and accelerate development into the next. Next to the Eiffel Tower, the 'Globe Céleste' was one of the main attractions. This monumental globe of 45 metres in diameter catered for armchair space-travellers; spectators leaned back in easy chairs while panoramas depicting the solar system were rolled past. In the 'Mareorama', the building with the four corner towers to the left, visitors were simulated to be on the deck of a ship with a panorama of the large Mediterranean ports. The exhibition pavilions located directly on the shore on the left were dedicated to navigation and trade.

Left: Eiffel tower, Paris (1900)
Right: Eiffel Tower, Paris (2017) © Nicolai Wolpert
Via della Conciliazione, Rome
The Road of the Conciliation is roughly 500 metres long and connects Saint Peter's Square to the Castel Sant'Angelo on the western bank of the Tiber River. Despite being one of the few major thoroughfares in Rome able to cope with a high volume of traffic without congestion, its construction was the subject of much ire both within the Roman community and among historical scholars due to the circumstances under which it was constructed. The broad traffic artery was opened in 1936 during the dictatorship of Mussolini, after the Lateran Accords of 1929, ratified in order to seal the reconciliation between the Italian state and the Vatican. To that end, it was necessary to destroy the medieval neighbourhood of the Borgo with its narrow streets and ancient houses and displace its residents en masse to settlements outside the city.

Left: Via della Conciliazione, Rome (ca. 1910) © IFN
Right: Via della Conciliazione, Rome (2013) © Bera Bork
Notre-Dame de Paris
One of the most widely recognized symbols of the city of Paris, Notre-Dame sustained serious damage when its roof caught fire on the evening of April 15, 2019 while undergoing renovation. The fire destroyed the roof and the flèche. The scaffolding comes from the restoration work that was going on at the outbreak of the fire.

Left: Notre-Dame de Paris (2009) © Zuffe
Right: Notre-Dame de Paris (2019) © Nicolai Wolpert
Tower Bridge, London
Today, most boats on this part of the Thames are tourist boats. That has not always been the case though. The part of the Thames where Tower Bridge sits is called the Pool of London, which in the Victorian era was the busiest port in the world. When Tower Bridge was built in 1894, cargo ships were coming in from all over the world carrying goods such as cotton, sugar and tea – all the things a growing city needed to sustain itself. These cargoes were offloaded into warehouses which lined the river banks between London Bridge and Limehouse, in East London. When a new bridge was proposed next to the Tower of London, those involved in this industry were concerned about how the cargo ships would reach the warehouses. Their concerns were listened to and a condition was made that the bridge’s design would not obstruct the sailing ships which needed to pass though. Over 50 different designs were submitted and Sir Horace Jones and Sir John Wolfe Barry’s, which included opening roadways, or bascules, was deemed the best. Even though these cargo ships have long gone, Tower Bridge still opens roughly between 700 to 1,000 times each year.