It was the most spectacular procession the world had ever seen: trumpeters on horseback and squadrons of chariots; troops of archers and scantily-clad dancing girls; acrobats and fanbearers – all paving the way for an immense float, pulled by hundreds of servants, bearing a woman of legendary beauty. Her name – Cleopatra. Or should that be Elizabeth Taylor?
The most famous scene from the 1963 movie Cleopatra, which depicts in glorious Technicolor the eponymous queen’s triumphal entry into Rome, remains perhaps the defining image from Elizabeth Taylor’s epic cinematic career. It also re-defined Cleopatra in the Western imagination, more powerfully than any depiction before or since. But how accurate a portrayal was Elizabeth Taylor’s evocation of exotic, ancient beauty?
Stripped of the Hollywood make-over, the bare historical facts are clear enough. In 51 BC, Cleopatra became the queen of Egypt. Three years later, in the humid heat of a mid-August day, in the royal quarter of Alexandria, she had her first meeting with Julius Caesar. She was 21, he was 52. She was the ruler of the richest, most exalted kingdom of the ancient world, the heir to 100 generations of pharaohs. He was an upstart general from an upstart republic on the fringes of the civilized world. It was an unlikely pairing, but the chemistry worked. 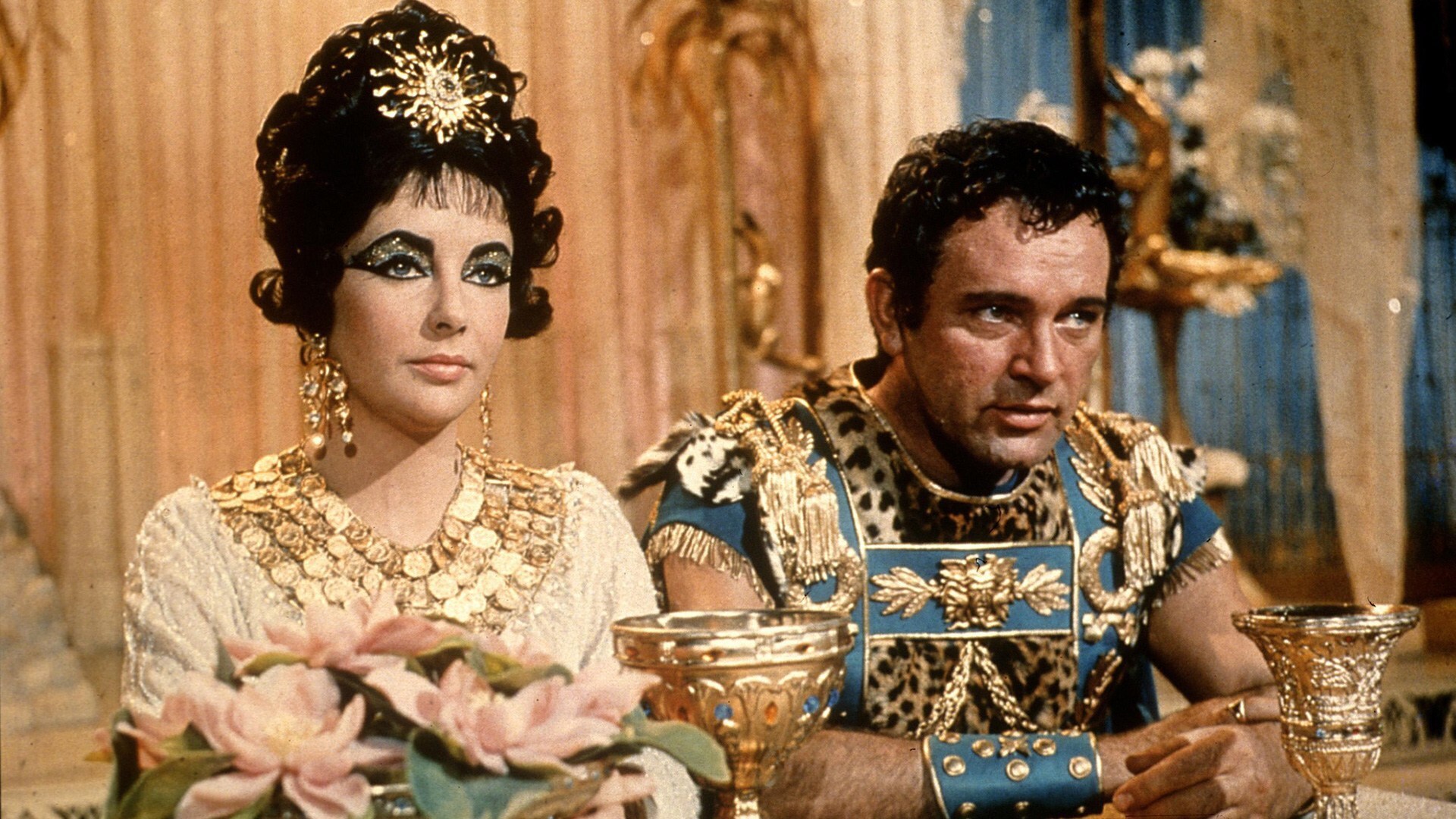 Cleopatra and Julius Caesar, 1963 film
Caesar and Cleopatra sailed up the Nile to proclaim their union and she duly bore him a son, Caesarion (“little Caesar”). Two years later, when Caesar finally returned to Rome from the battlefield, he invited his paramour to join him. So it was that, in 46 BC, at the height of her power and popularity, Cleopatra journeyed to Rome as Caesar’s honoured guest, and stayed with him for the next two years in his estate on the banks of the Tiber River. After his assassination, on the Ides of March 44 BC, she fled the city, never to return – although she subsequently took a second Roman lover, Mark Antony, by whom she had three more children.
Where, then, do the historical and Hollywood accounts concur? Of Cleopatra’s grand arrival in Rome, there can be no doubt, but it is unlikely that she would have made quite so bombastic an entrance. The young Roman republic took a rather dim view of foreign despots – even if it found them endlessly fascinating – and Caesar was a skilful enough politician to read the public mood. As for the need to dazzle Caesar with her wealth and beauty, Cleopatra had already accomplished that, and she had his child to prove it.
The extravagance of Taylor’s ceremonial entrance into Rome has more to do with the fevered imagination – and almost limitless budget – of Cleopatra’s producers than with any historical account of events in 46 BC. According to the film’s publicist, the replica Roman forum constructed as the set for this scene was “bigger than the original and about a hundred times as expensive.” 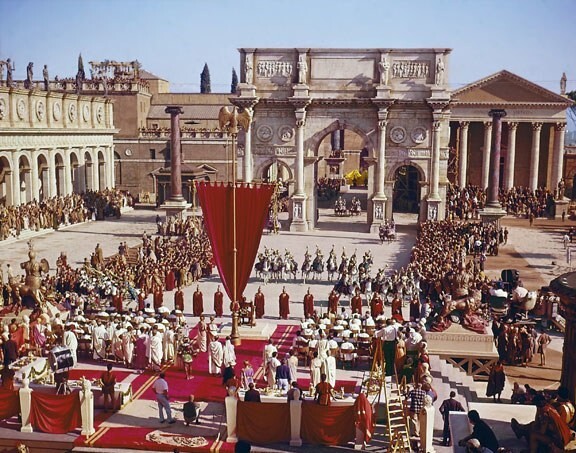 Cleopatra © Bob Penn, Twentieth Century-Fox Film Corporation
Equally erroneous is the Egyptian queen’s legendary beauty. While Elizabeth Taylor was noted for her looks, as her seven husbands would testify, the historical Cleopatra had to trade on her other assets, namely political acumen and economic power. Contemporary portraits show the queen with a large, aquiline nose and a pointed chin – hardly the epitome of feminine charm.
But what Taylor did capture, brilliantly, was Cleopatra’s unmatched, enduring allure. The Romans were fascinated by the spectacle of an exotic woman in their midst. They gossiped about her relationship with Caesar and criticized her for her extravagance and licentiousness. Elizabeth Taylor’s screen portrayal gave us the same spectacle, the same opportunity for gossip, and the same exemplar of a femme fatale. 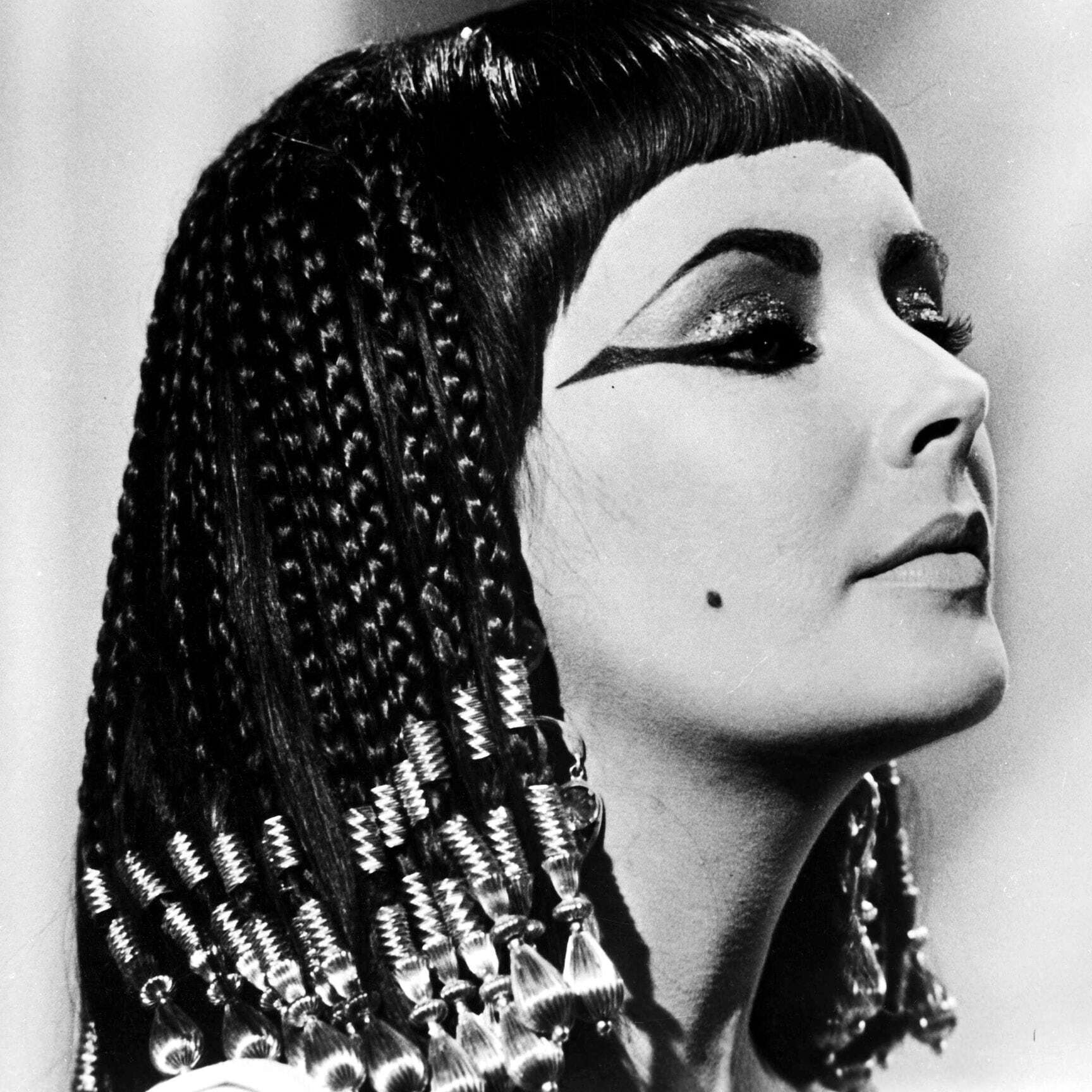 Elizabeth Taylor as Cleopatra, 1963 © Rex
Four brief years, two meetings, and a love-child: that is the real story of Caesar and Cleopatra. But it can never hope to satisfy our yearning for romance and intrigue, for the highs and lows of soap-opera emotion played out in lavish locations. For that, we need 24-carat gold costumes and a cast of thousands. We need pomp and pageantry, tantrums and triumphs. Above all, we need the late, great, Elizabeth Taylor.
Explore the land of Cleopatra on Special Travel International’s tour: Egypt and Jordan – Great Cultures from the Sahara to the Nile River (January 20 – February 4/9, 2020)
On the Horizon for 2022-23