The forerunner of the Christmas market as we know it was Vienna’s December Market in the Middle Ages. It was first recorded in 1298, when citizens were granted permission to hold a Krippenmarkt during Advent. Open-air winter street markets were associated more specifically with Christmas in Germany, with the first Christkindlmarkt taking place a century later, in 1384. This was in the eastern hilltop town of Bautzen, Saxony. These early markets started by only selling meat and vegetables but evolved to provide other everyday purchases, and eventually seasonal treats, decorations and crafts – accompanied by singing and dancing.
Christmas markets received a big boost in the 16th century, when the teachings of German protestant reformer Martin Luther suggested that the birth of Christ was a more appropriate gift-giving day than other saints’ days. The churches – who originally encouraged markets to be held nearby to get more people to attend services – soon found themselves competing against the markets for their congregation. This was when the practice of Christmas gift-buying began to take-off, and festive markets have been popular ever since.
As Christkindlmarkts took hold throughout Germany, they inspired neighbouring countries, like the Czech Republic, Austria, Hungary and the Netherlands, to host their own versions of the winter fair. Soon, Christmas markets were being held throughout Europe, from the UK to Romania, Sweden to Spain as well as overseas, as local people sought to revel in the enchantment of the festive season and put their own stamp on the traditional Christmas market.

Left: Chriskindelmarkt in 1950 in Neubaugürtel, Vienna © Municipal Department 59
Right: Christmas market stall © Tom Lamm
Vienna, Austria
The Christmas markets in Vienna truly are an age-old tradition. The precursor to Christmas markets is thought to be Vienna’s Dezembermarkt (December Market), dating back to around 1298. Emperor Albrecht I granted shopkeepers the rights to hold a market for a day or two in early winter so that townspeople could stock up on supplies to last through the cold months. Over time, local families started setting up stalls to sell baskets, toys and woodcarvings alongside others selling almonds, roasted chestnuts and gingerbread. These were often bought as gifts to give away at Christmas. Since then, the character and prevalence of these markets has changed considerably. Nowadays, 12 Christmas markets spread out along the narrow streets of the old town, offering stalls overflowing with Christmas decorations, nativity sets, traditional wooden toys and artisanal handicrafts.
The largest and most popular market is held in the large Rathausplatz and turns the City Hall Square into a shining fairy-tale land. Some 150 stalls sell quality gifts, as well as tempting Viennese foods, freshlybaked pretzels and other baked goods, and Christmas-spiced beverages. Besides Glühwein, the favourite Christmas drink in Austria is Weihnachtspunsch, a hot wine-and-rum punch made with lemon and orange peels, brown sugar, cinnamon and other spices.
Schönbrunn Palace, former summer residence of the Austrian Emperors, also provides a spectacular backdrop for an idyllic Christmas village. Dozens of stalls form a giant circle around the palace courtyard, offering high-quality arts and crafts from the workshops of candle makers, glass blowers, wood carvers, potters, needleworkers and other artists and artisans. A giant Christmas tree dominates the palace side, where a small stage often plays host to open-air Advent concerts.
Dresden, Germany
Dating back to 1434, when it was just a one-day event held to provide the citizens of Dresden with the meat for the Christmas meal, Germany’s oldest market has expanded over the centuries. With its 240 stands spread out across Dresden’s large Altmarkt square, it is one of the largest and most authentic Christmas markets in Germany. On sale at the stands are wooden Christmas decorations that originated in this region and in the nearby Erzgebirge (Ore Mountains) mining region, including decorative nutcracker figures, Christmas-candle pyramids, Räuchermänner (“smoking men” incense burners), and arch-shaped wooden or metal “Schwibbogen” decorative candleholders for seven or ten candles. A huge Schwibbogen replica with ten giant electric candles stands on one side of the market.
Special traditions include the baking of Stollen, a light airy fruit cake shaped like an entrance to a mine tunnel to pay homage to the area’s mining industry. Each year, on the Saturday before the second Advent Sunday, dozens of local bakers work together to make the world’s largest Stollen, which is then paraded through the market on a carriage, ceremoniously sliced up and sold for a good cause.

Left: Nuremberg Christmas Market © Florian Trykowski
Right: Market stall, Striezelmarkt Dresden
Nuremberg, Germany
The Nuremberg Christmas market probably began around 1530. It was in 1545 that the Protestant reformer Martin Luther introduced the custom of the angel-like “Christ Child” (Christkind) bringing Christmas gifts to children – rather than the Catholic Saint Nicholas. Since 1969, on the Friday before Advent, the blonde curly-haired Christkind angel appears on the balcony of the Church of Our Lady to open the holiday season and proclaims “You men and women who once were children, be young again”. 180 decorated market stands in the heart of Nuremberg’s old town offer traditional wares such as handmade Christmas tree decorations, tinsel angels, wooden nut crackers and paper star lanterns, and invite guests to enjoy traditional “Zwetschgenmännle” goodies made of prunes, grilled sausages, crackling pork, ginger bread and mulled wine.
Salzburg, Austria
The origins of the famous Salzburg Christmas market go all the way back to the late 15th century. Back then, the so-called “Tandlmarkt” would be held on Cathedral Square in the heart of the city, offering a wide range of goods for the locals to buy. By the 17th century, this Advent market had been christened the “Nikolaimarkt” (“Saint Nicholas’ Market”). For two weeks before and two weeks after St. Nicholas’ Day, on December 6, a variety of products were offered for sale on and close to Cathedral Square – from a delectable selection of foods, to dolls and all kinds of bric-a-brac. The Nikolaimarkt was one of the most famous Advent markets of its day.
The Salzburg Christkindlmarkt, as it is known today, has existed since 1974. Every year, with the cathedral as a backdrop, around 100 stalls that look much as they did when they were first set up way back in the 15th century spread across two neighbouring squares, Domplatz and Residenzplatz. From gingerbread and schnapps to hand-painted baubles and frankincense, everything associated with Advent can be found here. Daily events include musical performances from quintet choirs, acapella ensembles, gospel singers and folk groups, plus afternoon readings of Christmas stories for children.

Left: Place du Marché aux Cochons de Lait, Strasbourg © Philippe de Rexel
Right: Christmas lanterns
Strasbourg, France
Records show that Strasbourg held a Klausenmärik (Saint Nicolas’ market) on December 6 each year from the late 12th century. The famous Christkindelsmärik (Christmas market), as it is known today, came into being in 1570, when Alsace switched to Protestantism. Johannes Flinner, the preacher at the cathedral, abolished the Klausenmärik to erase all references to Catholicism.
Its 300 traditional chalets are spread over several locations across the Grande Île, the historic centre of Strasbourg, including Place Broglie, in front of the lofty cathedral or at the picturesque Petite-France district. At nightfall, self-proclaimed “Capital of Christmas” sparkles with giant chandeliers, a white crystal tree, thousand twinkling lights on church façades in a fairy-tale setting. The oldest Christmas market in France sells everything from handmade decorations and baubles to blown-glass candles and traditional bredele butter biscuits from the Alsace region. What makes this market stand out is the expansive range of events featuring top Alsatian designers, woodworkers, carpet weavers, ceramicists, designers and makers of beautiful linens.
Brussels, Belgium
This elaborate Christmas market is divided into six sections that merge together for one giant Christmas celebration, with different layouts and themes. At the 17th-century Grand Place, the main square of Brussels, is the city’s largest Christmas tree and regular light shows against the UNESCO-protected facades. Visitors can then walk northwest to 200 stalls selling a sea of crafts and gifts, as well as escargots, oysters, tartiflette and gourmet products from around Europe. A little further are the Ferris wheel, champagne bar tent and igloo with live music performances.
Copenhagen, Denmark
From mid-November until early January, the magic of Christmas comes alive with a million twinkling lights at Copenhagen’s Tivoli Gardens – which also happens to be one of the world’s oldest amusement parks, having been open since 1844. It is no surprise that Walt Disney gained inspiration from Tivoli Gardens for his own amusement parks in the 1950s. Enveloped in Danish hygge, visitors can pose for a photo with Father Christmas (known as Julemanden), ride roller coasters, join twilight garden tours and attend holiday-themed shows, including plays and ballets. There is also mulled wine and Danish doughnuts and on some nights, fireworks light up the sky.
Budapest, Hungary
Hungary’s capital celebrates with three distinct Christmas markets each year – the biggest being the Budapest Christmas Market on Vörösmarty Square in the centre of Pest, framed by a large Christmas tree. Since 1998, vendors have been selling handicrafts, mulled wine and local food specialties such as goulash in bread bowls, potato fritters, sweet chimney cakes and honey cookies. Each evening, festive stories and religious scenes are projected onto the façade of St. Stephen’s Basilica in an extraordinary light show, and the Gerbeaud building’s exterior transforms into an enormous Advent calendar, where each day a window is opened up revealing how many days are left until Christmas – complemented with a light and music show. 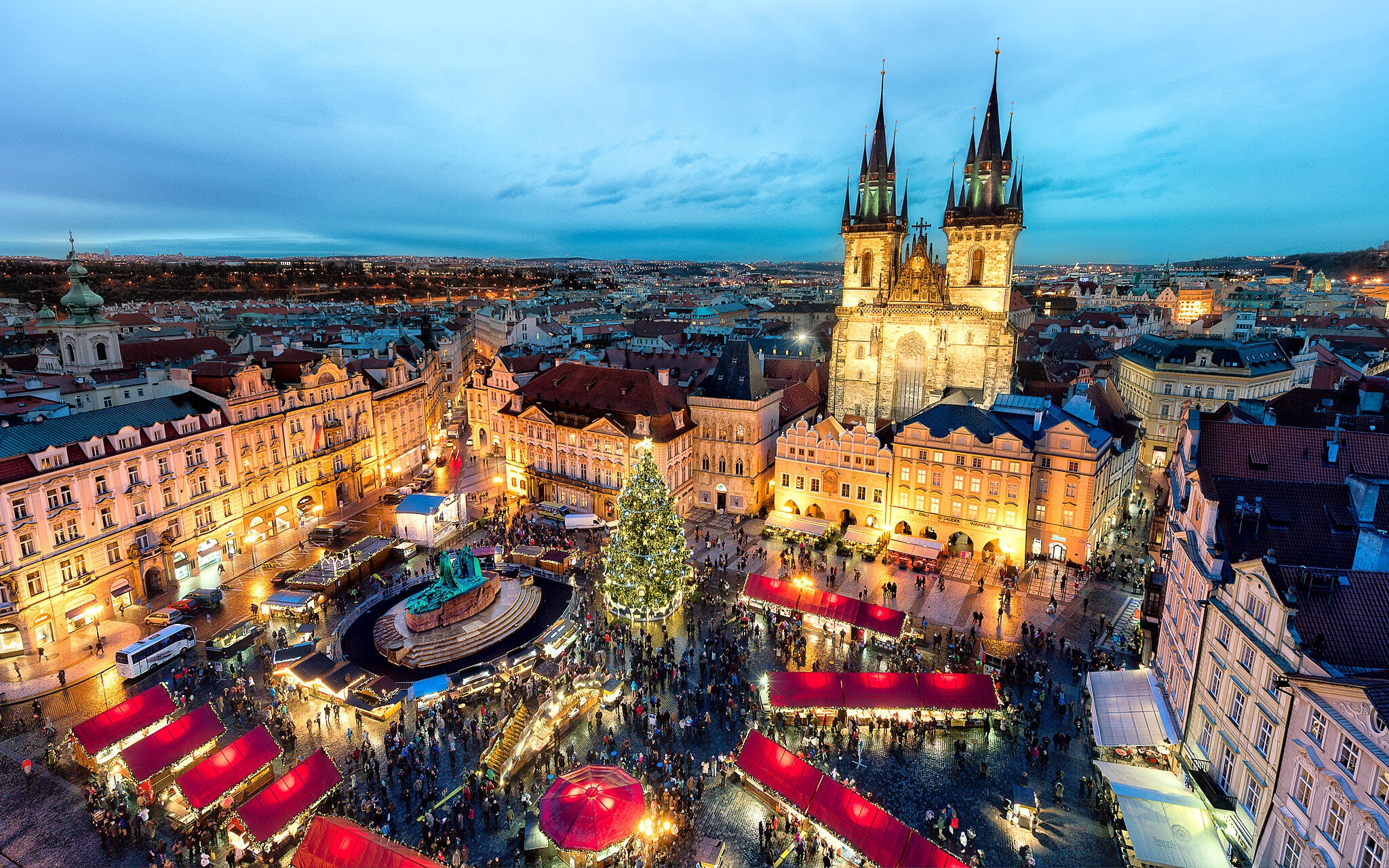 Prague Christmas Market © Victor Porof
Prague, Czech Republic
Set in the very heart of the city is a traditional Czech marketplace, where, in dozens of wooden stalls, merchants offer typical Christmas goods such as traditional Czech blown glass balls, products made of glass pearls or straw, hand-embroidered tablecloths, wooden toys and biscuit cutters – amongst other things. It is not uncommon for locals to swap their mug of mulled wine for a glass of grog with rum, lemon and sugar. The setting is magnificent, with the 14th-century twin spires of Our Lady Before Týn on one side, and the city’s famous 15th-century astronomical clock on the other.
Please check our website for details on Special Travel International’s upcoming tours to Central Europe:
For the Love of Vienna (May 4/9–17, 2022)
Classical Music on the Romantic Danube (Sep 27–Oct 7, 2022)
The Historic Danube: Golf & Culture (Sep 27– Oct 10, 2022)
On the Horizon for 2024-25