1. The term “opera” comes from the Latin opus, or “work”. The term “soap opera” was first recorded in 1939 as a derogatory term for daytime radio shows that were sponsored by soap manufacturers.
2. During the 17th century, women were not allowed to sing onstage, not even in a chorus. Castrated males, or castrati, would sing the soprano/mezzo/alto parts. The first of the great castrati was Baldassare Ferri. He was so famous that the town’s people met him three miles outside the city and filled his carriage with flowers.
3. Opera singers can project their voices over a full orchestra because they sing at a different sound frequency.
4. After hearing of scandalous behaviour at the Tor di Nona in 1697, Pope Innocent XII (1615-1700) decreed the opera house immoral and ordered it to be burned to the ground.
5. During Wagner’s lifetime, there was a widespread misconception that Wagner did not like applause at his operas. Frustrated by the lack of applause, Wagner himself cried “Bravo!” at the end of the second act of Parsifal, only to be hissed by other members of the audience. At Bayreuth Festspielhaus (Festival Theatre), considered a holy place to “Wagnerians”, audiences do not applaud at the end of the first act of Parsifal.
6. In 18th-century opera seria (serious opera), the main singers would stand in ballet’s third position, with bent, bowlegged knees and heels together, with one ankle in front of the other. They remained in that position the entire song.
7. Jean-Baptiste Lully (1632-1687) is considered the father of French opera, though he was actually born in Italy. He pioneered the concept of the conducting stick but, unfortunately, he hit his own foot with a heavy conducting staff. His foot became gangrenous, ultimately killing him.
8. When Charles Gounod’s (1818-1893) opera Faust wasn’t selling tickets, the producer gave away tickets for the first three performances to people out of town and declared the performances were sold out. Wondering what all the fuss was about, the public began buying tickets, and Faust became a hit.
9. Mozart wrote his first opera, Bastien und Bastienne, a parody of Jean-Jacques Rousseau’s operatic intermezzo “Le devin du village” (The Village Soothsayer) when he was only 12 years old.
10. Beethoven wrote only one opera, Fidelio, a fiercely humanistic opera. He worked on it for 11 years, revising it over and over again. It was produced in 1805, just as his deafness was plunging him into depression.
11. Richard Wagner’s “Walkürenritt” (“Ride of the Valkyries”) from Die Walküre (The Valkyrie), which debuted in 1870, is extremely popular in movies and TV shows, most notably in Apocalypse Now when U.S. soldiers blast this music from their helicopters to terrify the Vietnamese.
12. After an opera, it is appropriate to yell bravo for a man and brava for a woman. If you want to cheer for two or more singers, use the plural form, which is bravi. If the group consists only of women, yell brave (BRAH-vay).
13. In 1994, Warner Brother’s 1957 classic “What’s Opera, Doc?” featuring Elmer Fudd chasing Bugs Bunny in a parody of Richard Wagner’s Ring cycle operas, was voted #1 of the 50 Greatest Cartoons. It was also deemed “culturally, historically, or aesthetically significant” by the Library of Congress and was selected for preservation in the National Film Registry.
14. La Scala in Milan, inaugurated in 1778, is famous for having the hardest-to-please audience in opera. The audience has been known to make a performer keep singing until he or she “gets it right”. 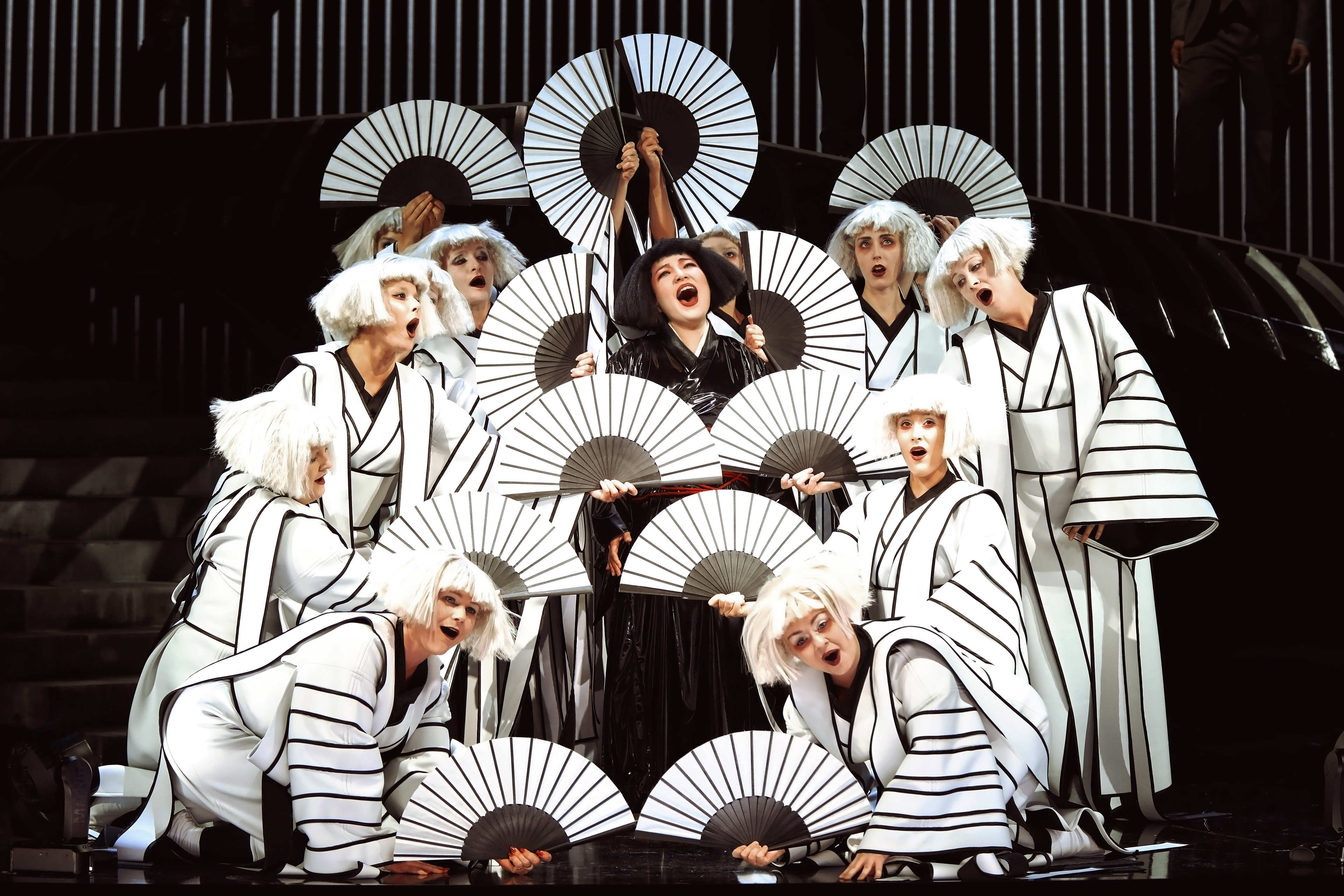 2019 Opera Australia production of Madama Butterfly © Prudence Upton, Sydney Opera House
15. The first performance of Puccini’s opera Madama Butterfly was one of opera’s all-time worst flops. The audience made bird, cow and goat calls and booed. Madama Butterfly, however, became one of the best-loved operas in history.
16. Mozart joined the Freemasons in 1784 and wrote several cantatas for their ceremonies. In The Magic Flute, he incorporated many of their ideals of wisdom, friendship, nature and sacrifice. His librettist was also a former mason. Mozart died nine weeks after the opera’s premiere, and some say he was killed because his opera revealed the society’s secrets.
17. Gaetano Donizetti (1797-1848) wrote one of opera’s most famous insanity scenes in Lucia di Lammermoor (1835), based on Sir Walter Scott’s novel The Bride of Lammermoor. He himself later went mad due to syphilis and spent the last years of his life in an insane asylum.
18. Singer Enrico Caruso’s voice was unique and versatile. During a performance of La Bohème, the basso who was to sing whispered: “I’ve lost my voice”. Caruso replied, “Move your lips and I’ll sing it for you”. With back turned to the audience, Caruso sang for him. The audience cheered, not knowing Caruso sang it. Caruso later recorded the aria. Teatro La Fenice © Ettore Bellini
19. The first public opera house, San Cassiano, opened in Venice in 1637 where “the father of opera”, Claudio Monteverdi, shifted the emphasis from a more dialogue-based opera to a more musical opera. Monteverdi helped place Venice as the opera capital of the world.
20. Mozart inherited the legacy of opera seria and opera buffa as well as the German Singspiel, but he transformed them and incorporated music of rare inspiration. Opera history is often divided into pre-Mozart and post-Mozart.
21. Opera music has been incorporated into many popular movies and commercials. For example, Léo Delibes’ “The Flower Duet” (“Sous le dôme épais”) from Lakmé can be heard in The American President, Tomb Raider: The Cradle of Life, Superman Returns, and Meet the Parents (as well as in numerous TV shows and commercials). Rossini’s The Barber of Seville (Il barbiere di Siviglia) has been featured in Babe: The Pig in the City, Deep Impact, Jumanji, Space Jam, Under the Tuscan Sun, and in an award-winning Nike commercial starring Charles Barkley.
22. Richard Strauss’ 1905 opera Salome about Salome and John the Baptist was so graphically violent that it was banned at the Metropolitan Opera in New York for decades. It includes incest, nudity, murder and a dramatic scene where Salome kisses the lips of John the Baptist’s severed head. 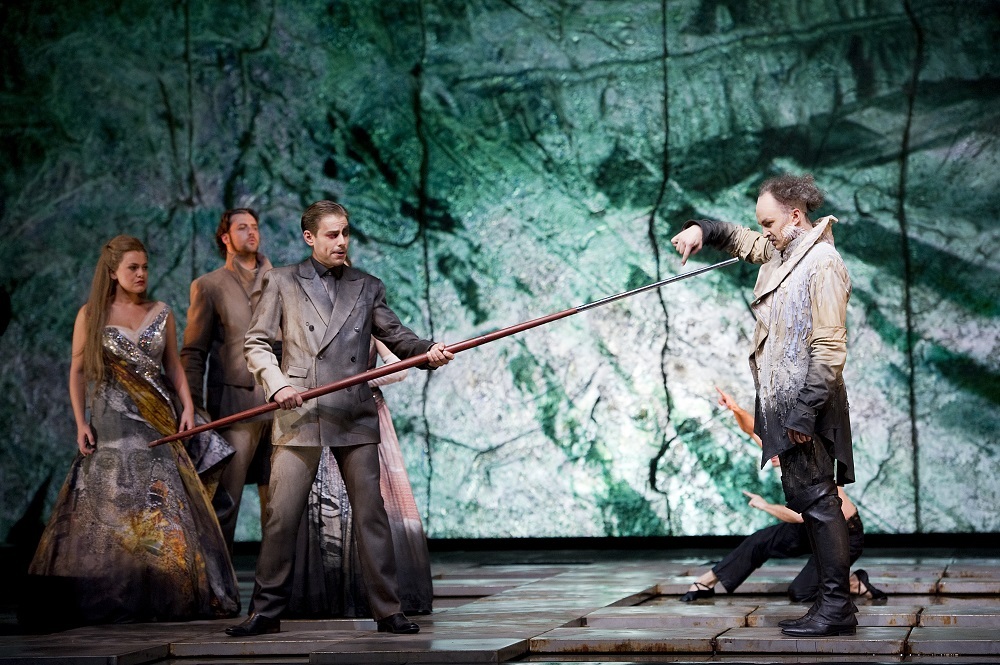 2010 production of Das Rheingold © Monika Rittershaus, Staatsoper Berlin
23. Richard Wagner’s Der Ring des Nibelungen (The Ring of the Nibelung) is a cycle of four operas (Das Rheingold, Die Walküre, Siegfried, and Götterdämmerung). They are usually performed individually, but Wagner intended they be performed in a series as a coherent whole. When an opera company dares to take on that herculean task, The Ring becomes the world’s longest opera at over 14 hours – and close to 18 hours including intermissions. Wagner wrote it over a 30-year span. It is based loosely on a Norse legend of the Nibelungenlied.
24. Johann Sebastian Bach wrote a mini-opera about coffee addiction. 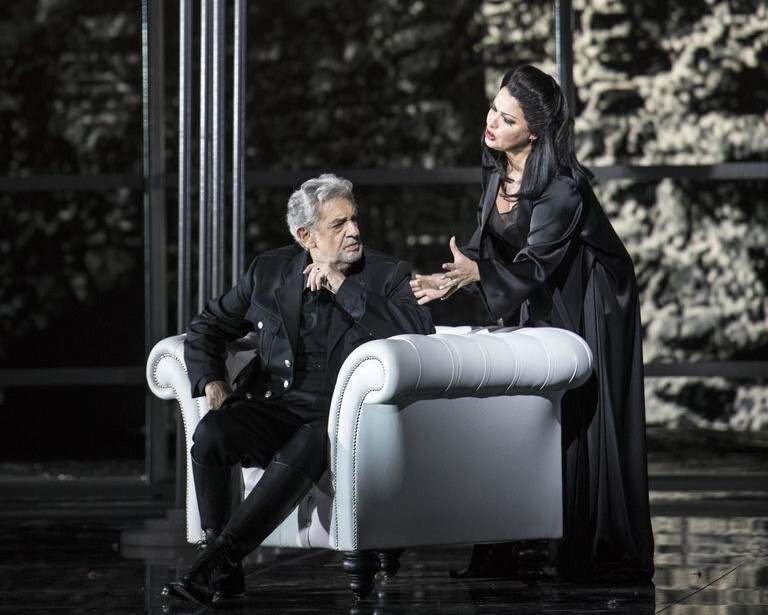 Placido Domingo in Macbeth, 2015 © Bernd Uhlig, Staatsoper Berlin
25. After Plácido Domingo performed the title role in Verdi’s Otello in Vienna on July 30, 1991, the audience clapped for one hour and twenty minutes (and 101 curtain calls), setting a new world record for the longest applause ever.
26. Luciano Pavarotti received 165 curtain calls on February 24, 1988, after singing in Donizetti’s L’elisir d’amore in Berlin.
27. Some opera composers hired groups of applauders to cheer their works – or boo their rivals. An organized group of professional applauders (dubbed a claque) was common in French theatres during classical times. As part of an organized institution, acting agencies managed and supplied claqueurs, who would employ loud laughter, feign tears, request encores and keep the audience in good humor. The practice later spread to other areas, including Italy and New York.
28. In 1859, Wagner wrote an essay titled “Jewry in Music” that decried the work of Jewish composers, which Hitler later admired. Yet Wagner hired Hermann Levi, a Jew, to conduct Parsifal. Later in life, Wagner considered writing operas about Jesus Christ and Buddha.
29. Gioacchino Rossini (1792-1868) wrote one of the most famous operas, The Barber of Seville, in just two weeks.
30. When six-foot-four, 330-pound basso Luigi Lablache (1794-1854) was cast as prisoner wasting away in a dungeon, the audience burst into laughter at the first words he sang: “I’m starving”.
Visit some of the leading opera houses of Italy on Special Travel International’s Classical Northern Italy tour (June 19 – July 1, 2020)
On the Horizon for 2022-23