15 Interesting Facts about the Danube

1. The Danube is the second longest river in Europe after the Volga, and the longest river in the European Union.
2. Originating in the Black Forest, Germany, the Danube flows southeast for 2,860 kilometers all the way to the Romanian Black Sea. Just before the Danube pours into the Black Sea, it splits into three branches, the Chilia, Sulina, and Sfântu Gheorghe.
3. Although it starts off as two little streams, they join into one flow in Donaueschingen in Germany. A stone statue symbolically shows that the river originated there.
4. The river gathers the waters of more than 300 tributaries.
5. More than 700 dams have been built along the Danube River’s tributaries.
6. The greater part of the Danube Delta lies in Romania.
7. As it travels from the Black Forest to the Black Sea, the Danube passes through or beside ten different countries – Austria, Slovakia, Hungary, Croatia, Serbia, Romania, Bulgaria, Moldova and the Ukraine. It also passes through some of Central and Eastern Europe’s most important cities, such as Vienna, Budapest and Belgrade.
8. For the countries that border the river, the Danube is of crucial economic importance. Generation of hydroelectricity, fishing and irrigation are primary ways the river is used.
9. Through the Bavarian canal system, the Danube connects the Atlantic Ocean with the Black Sea. Because of this, it is one of Europe’s most important shipping routes, capable of accommodating even the largest of shipping vessels. 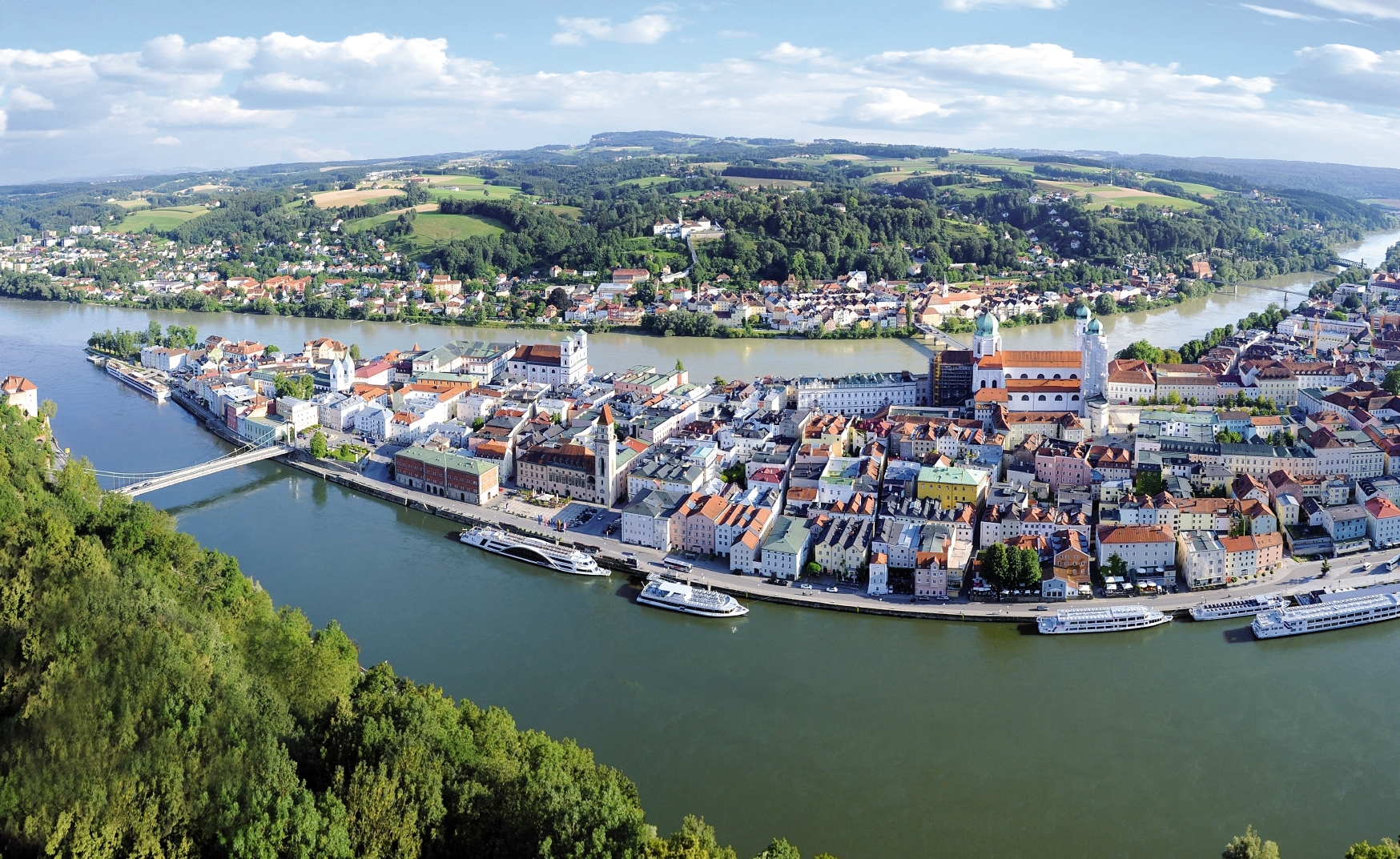 Passau panorama © Bayern Tourismus Marketing GmbH
10. The Danube was referred to as the “Queen of Europe’s River” by Napoleon.
11. Ancient Greeks navigated up the Danube from the Black Sea, as far as the Iron Gate. Later, as river transport was developed by the Romans, many cities along the Danube began as Roman military outposts. In medieval times, goods were moved either by boat or barge, or along its banks, fostering development of the Habsburg and Hungarian empires.
12. The river is home to numerous sunken ships. In 1944, sensing defeat was imminent, hundreds of German ships were scuttled in the Danube to avoid capture by the Soviet Union. Today, the warships can be seen from the banks of the Danube during summer, as the river’s water level falls.
13. The Danube Delta was designated a UNESCO World Heritage Site in 1991. It hosts over 300 species of birds as well as 45 freshwater fish species in its numerous lakes and marshes.
14. The Danube has been a historical hotspot for artists and musicians and is one of Europe’s most important cultural landmarks. The river has featured in Greek legends, Romanian folk songs and hundreds of modern novels.
15. Its immense volume of water makes the Danube one of Central Europe’s most vital sources of fresh drinking water. The river supplies approximately 20 million people with drinking water, particularly residents of the German city Stuttgart.
Sail along the Danube on Special Travel International’s tours:
Classical Music on the Romantic Danube and Prague extension (Sep 27 – Oct 7/10, 2022)
The Historic Danube: Golf & Culture (Sep 27 – Oct 10, 2022)
On the Horizon for 2022-23