This tour has been arranged for the Red Deer & District Pipe Band, but anyone interested in travelling to Ireland and Scotland with a fun group from Alberta is welcome to join. This tour covers the highlights of these regions plus a couple of special performances by the pipe band along the way.

Arrive at Dublin Airport. Embark on a panoramic tour of Dublin.
Discover the north and south side of the River Liffey. This area offers great striking monuments such as the General Post Office, O’Connell Street, or the Custom House along the quays, as well as Phoenix Park. The south side appears more sophisticated with its vast Georgian squares, such as Merrion Square, where Oscar Wilde’s House can still be found, along with Grafton Street and its quality shops. Not so far from St. Stephen’s Green, see the house of Bram Stoker, author of Dracula.
Visit Trinity College & Book of Kells. Trinity was founded in 1592 by Queen Elizabeth I on grounds confiscated from an Augustinian priory and is the oldest university in Ireland. Thomas Burgh built the Old Library in the 18th century. Today it houses one of Ireland’s most illustrious books, the 9th-century Book of Kells. Check into your hotel after 3:00 pm. Welcome dinner at a local restaurant. (D) 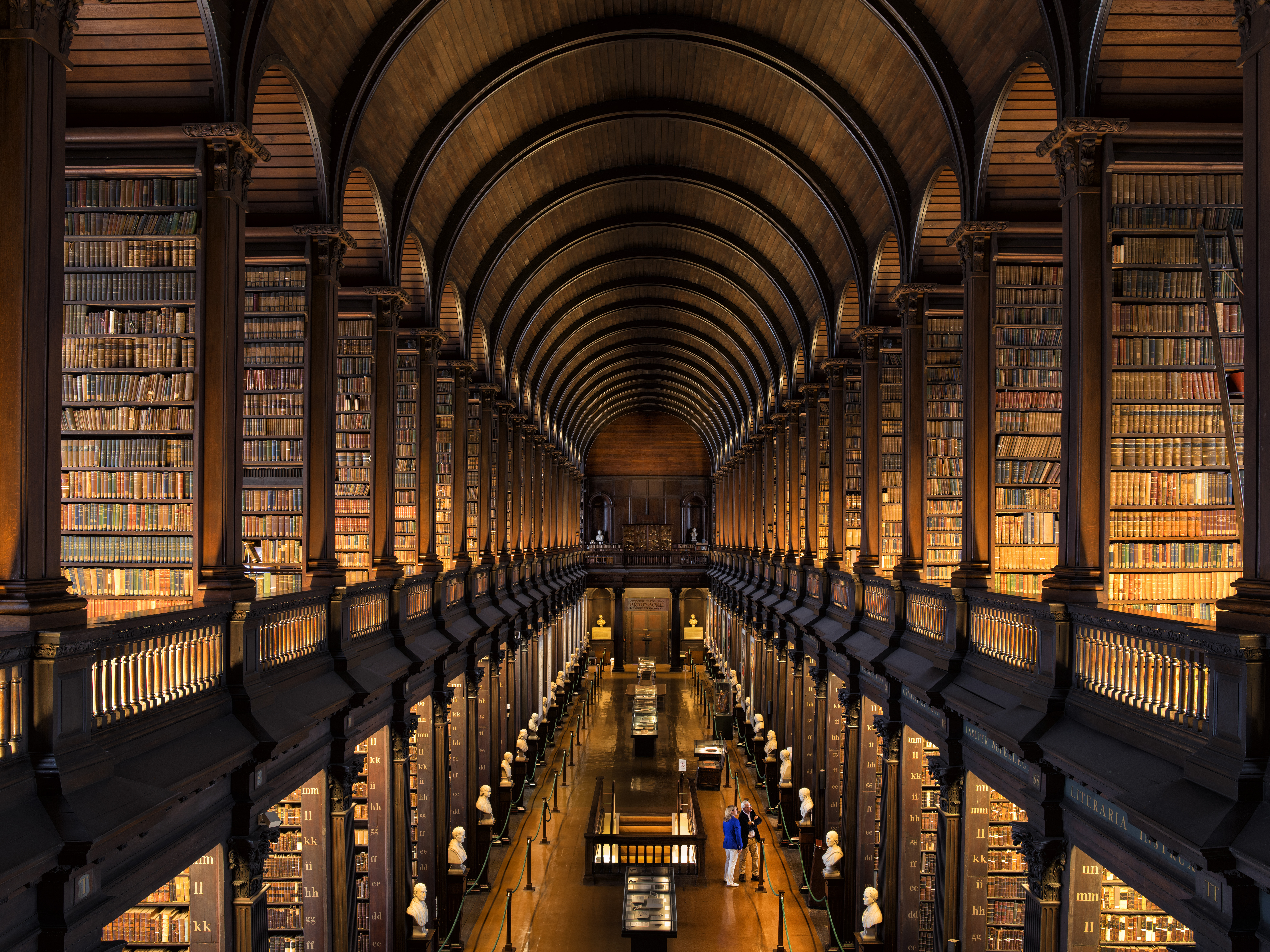 This morning, visit the Guinness Storehouse – Europe’s largest stout producing brewery. Opened in 1904, the storehouse was an operational plant for fermenting and storing Guinness. Learn about the ingredients, the brewing process, the time, the craft and the passion. After the tour, enjoy a pint of Guinness in the Gravity Bar.
Continue to the Jameson Distillery. This old barley storehouse, once the centre of distilling in Dublin, was renovated in 1998 and converted into a museum. The guided tour will take you through the various stages of whiskey distilling from grain intake to malting, mashing, fermentation, distillation, maturation and bottling. Taste the signature Jameson drink in the Jameson bar. Return to your hotel. Rest of the day at leisure. (B) 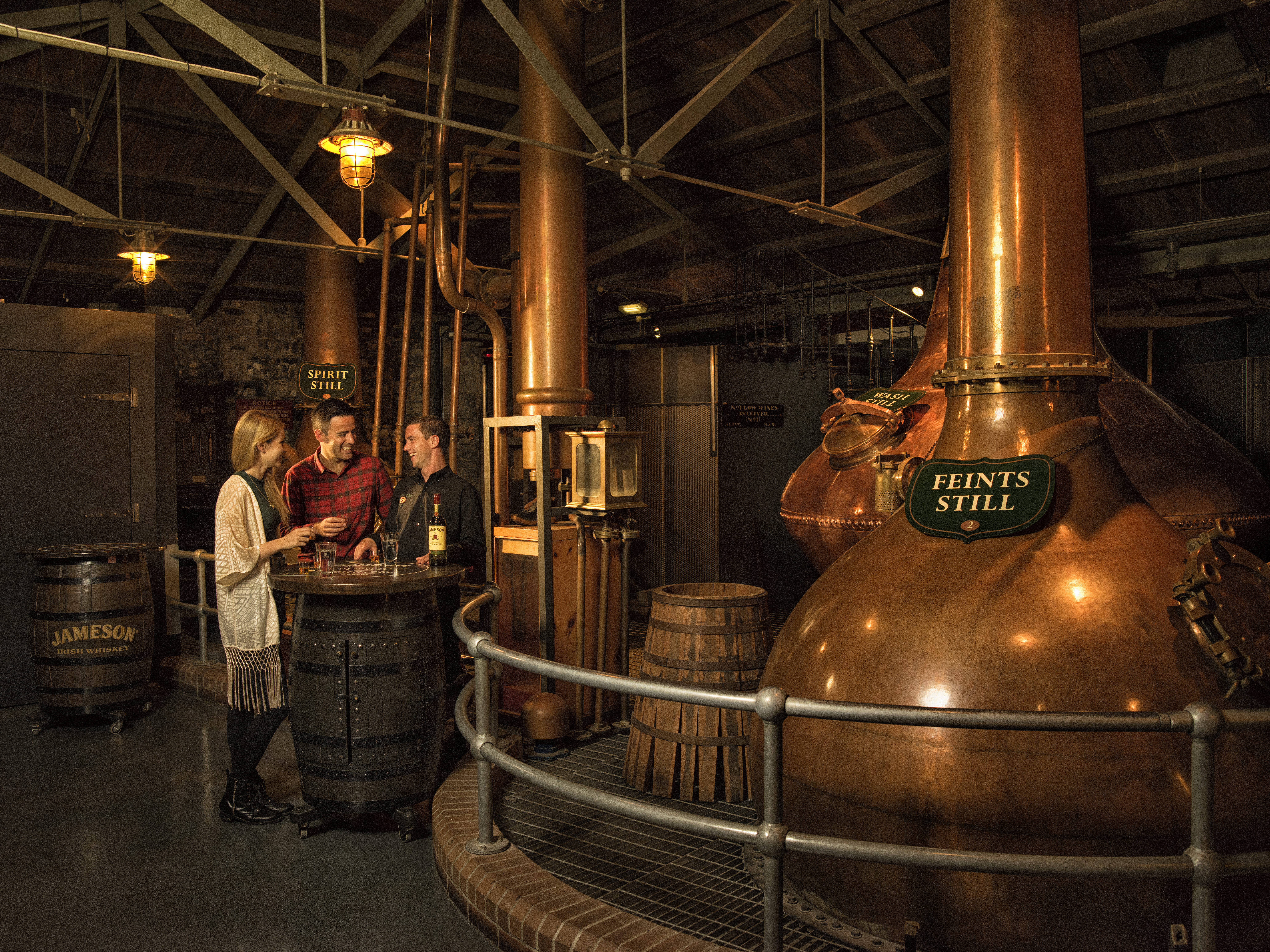 Depart for the Cliffs of Moher. Situated on the Atlantic Ocean and bordering the Burren region, they are one of Ireland’s most spectacular sights. Standing 230 metres above the ground at their highest point and 8km long, the cliffs boast one of the most amazing views in Ireland. On a clear day, the Aran Islands are visible in Galway Bay as well as the valleys and hills of Connemara.
Continue through the Burren region. The Burren landscape is visually similar to a moonscape and shelters a mixture of flora and archaeological sites. Man came here over 6,000 years ago, cleared the forests and set in motion soil erosion. Centuries of weathering have produced a terrain of fissured limestone pavements, disappearing lakes, terraced mountains and underground cave systems. For millennia man has left his mark; megalithic tombs and cooking sites litter the pavements, while medieval tower houses and churches guard the valleys. In the Burren, Arctic, Alpine and Mediterranean plants grow together. Check into your hotel in Galway. Evening at leisure. (B) 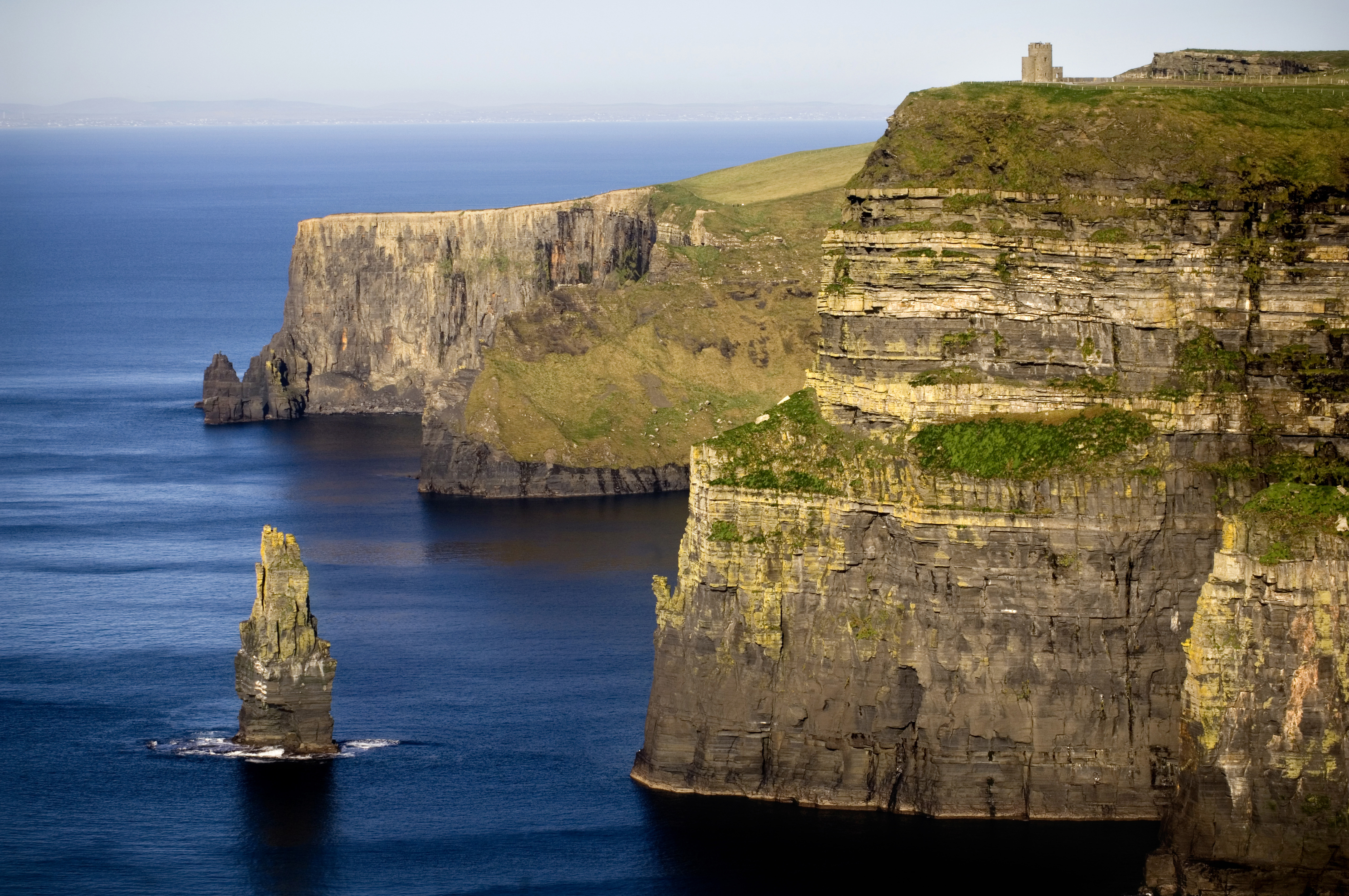 Head to Carrowmore Cemetery, which has over 60 stone circle and passage tombs making it one of the largest Stone Age cemeteries in Europe. It is also among Ireland’s oldest cemeteries of megalithic tombs, with monuments ranging from an amazing 5,500 to 6,500 years old. A restored cottage houses an exhibition about the site. Continue to Belleek Pottery. This world-famous brand has its home in an imposing Victorian building in the village of Bellek on the river Erne. The guided tour covers all of the production areas offering guests the possibility of meeting with the craftspeople, observing their craftsmanship working on the different handmade pieces.
Afternoon arrival in Donegal. (B,D)

Depart for the stone fort of Grianán of Aileach, which sits on a hilltop 250 metres above sea level. Its origins date back to 1700 BC. It is linked to the Tuatha de Danann who invaded Ireland before the Celts and built stone forts on top of strategic hills. The round fort is built largely without mortar.
Continue to Derry for a panoramic tour. Founded in the 6th century by St. Columba, Derry is the second-largest city and port of Northern Ireland. A walk on the walls, built in 1613 to protect the town from the Gaelic chieftains in Donegal, is a must. Rising to a height of 8 metres, they are 9-metre wide in some areas and are among the best-preserved fortifications in Europe. Today these walls separate two communities, the Bogside – a Catholic ghetto with its famous murals, and the Waterside – a Protestant enclave.
Possible performance by the Red Deer & District Pipe Band on the Derry City Walls. Check into your hotel in Derry. (B) 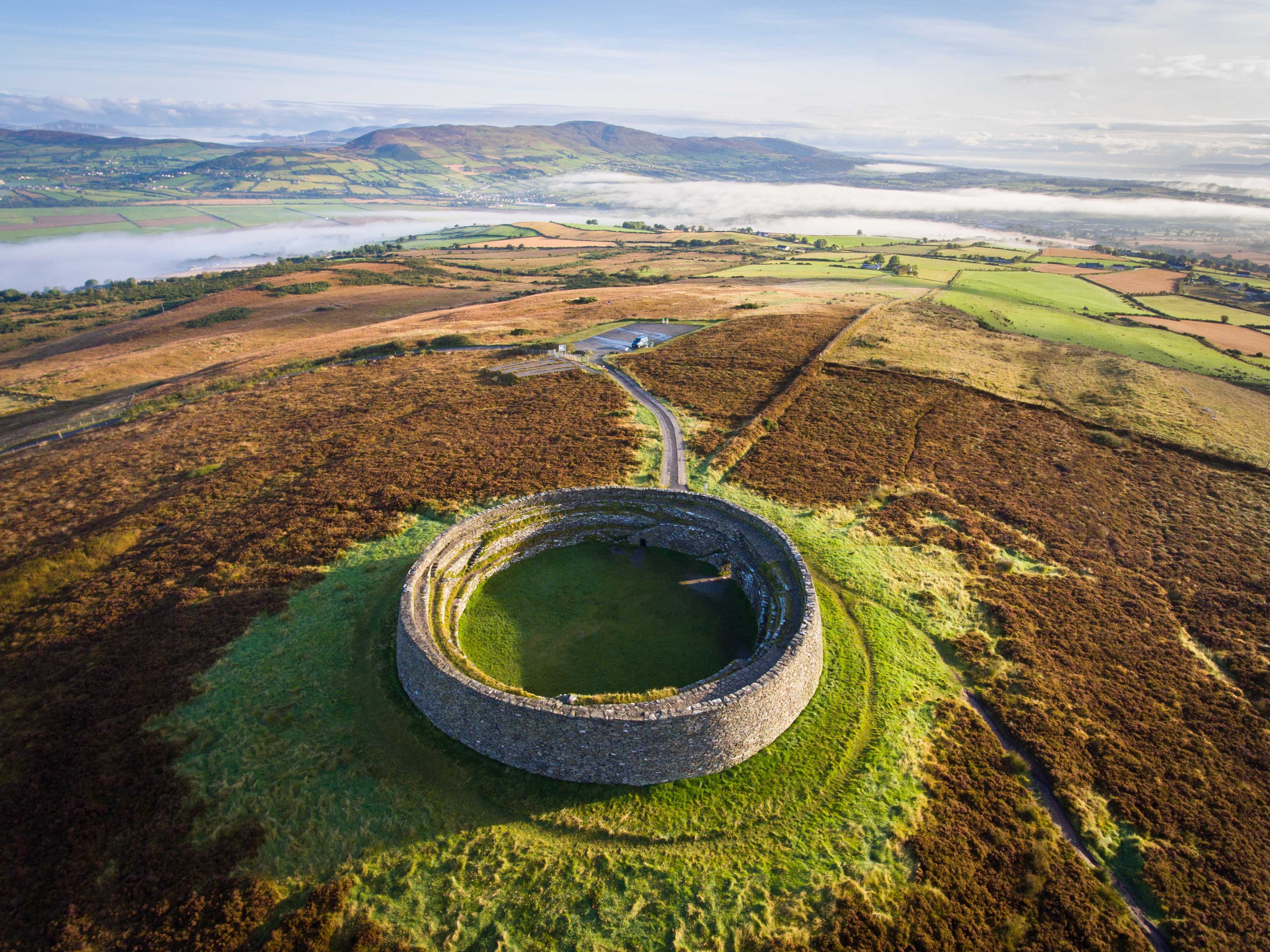 Encounter Northern Ireland’s favourite giant, Finn McCool, at the Giants Causeway Visitor Centre on the North Antrim coast.
According to legend Finn McCool created the Giants Causeway by building stepping stones to Scotland to challenge the Scottish giant Benandonner. This UNESCO World Heritage site consists of 40,000 basalt polygonal columns formed 60 million years ago after a volcanic eruption.
Continue to the Carrick-a-Rede, a spectacular rope bridge on the Antrim Coast, which spans a chasm 30-metre deep and 20-metre wide. Originally a seasonal working bridge for fishermen, it connects a small island to the mainland. Its construction once consisted of a single rope handrail and widely spaced slats, which the fishermen would cross to bring ashore salmon caught off the island.
Check into your hotel in Belfast. (B) 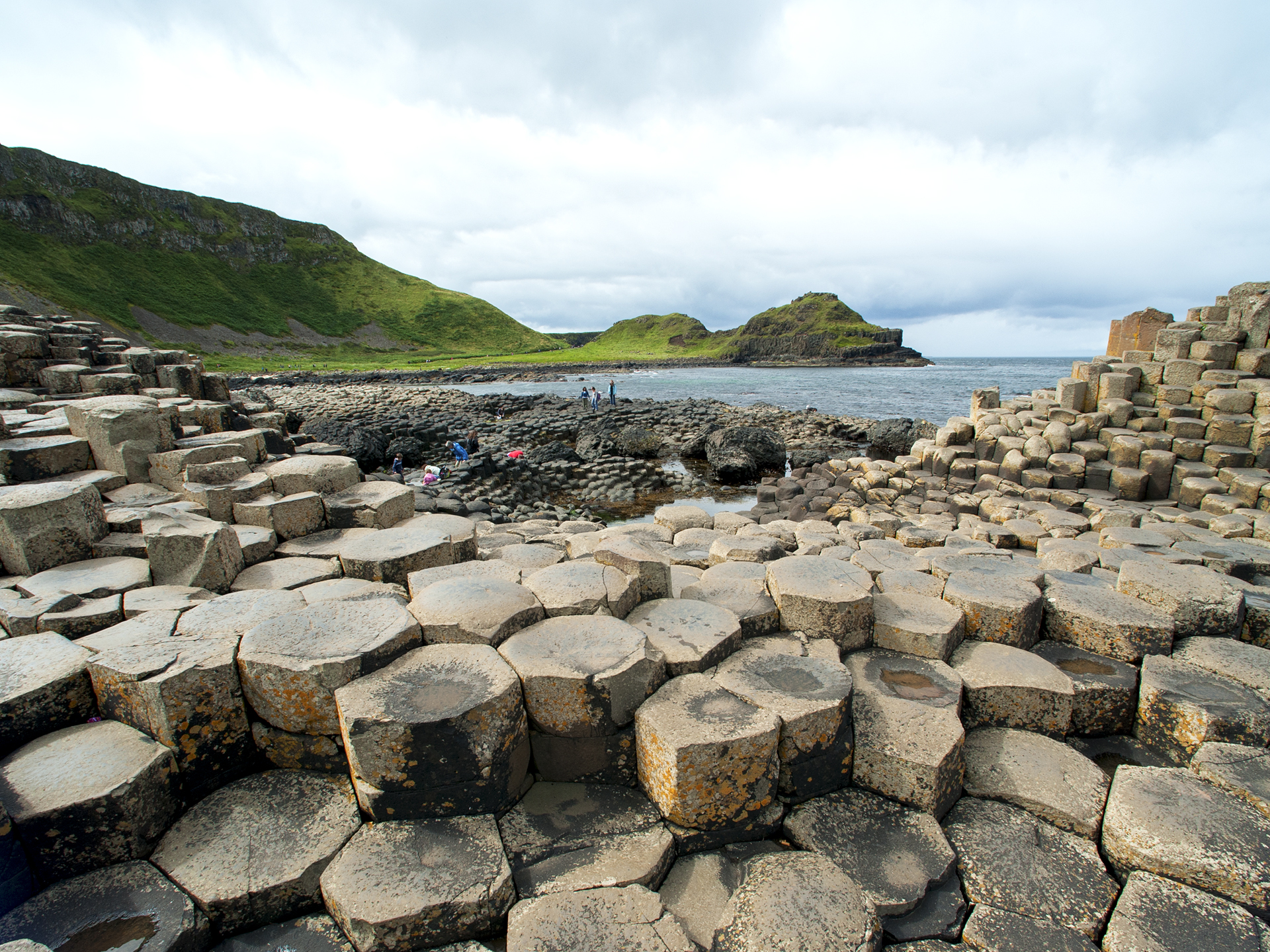 This morning enjoy a panoramic tour of Belfast. See the leaning Albert Memorial Clock tower (Ireland’s answer to the Tower of Pisa), the City Hall, the Opera House, the Crown Bar (dating from 1885), Queens University and the Botanic Gardens. A visit to the Shankill and Falls road will be of interest as it will give the visitor an indication of how life was in Belfast during the troubles.
Continue to the Titanic Belfast, which recreates the story of the world’s most famous ship in an iconic building right beside the historic site of the original ship’s construction. Opened in 2012 to coincide with the centenary of its launch, the self-guided journey begins on entering the building’s giant atrium, where the visitor is surrounded by the four ‘ship’s hull’ shaped wings which house the Titanic Experience. Uncover the true story of the Titanic, from her conception in Belfast in the early 1900s, through her construction and launch, to her famous maiden voyage and subsequent place in history. Possible performance by the Red Deer & District Pipe Band outside Titanic Belfast.

A visit to the Andante Percussion Drum Factory might be possible (not included and to be confirmed, as the group is scheduled to participate in the World Championship). Andante Percussion was formally established by Sam and Frank Hodgen in November 1986.
They were both experienced band players with over 80 years’ collective experience as musicians. Evening at leisure. (B) 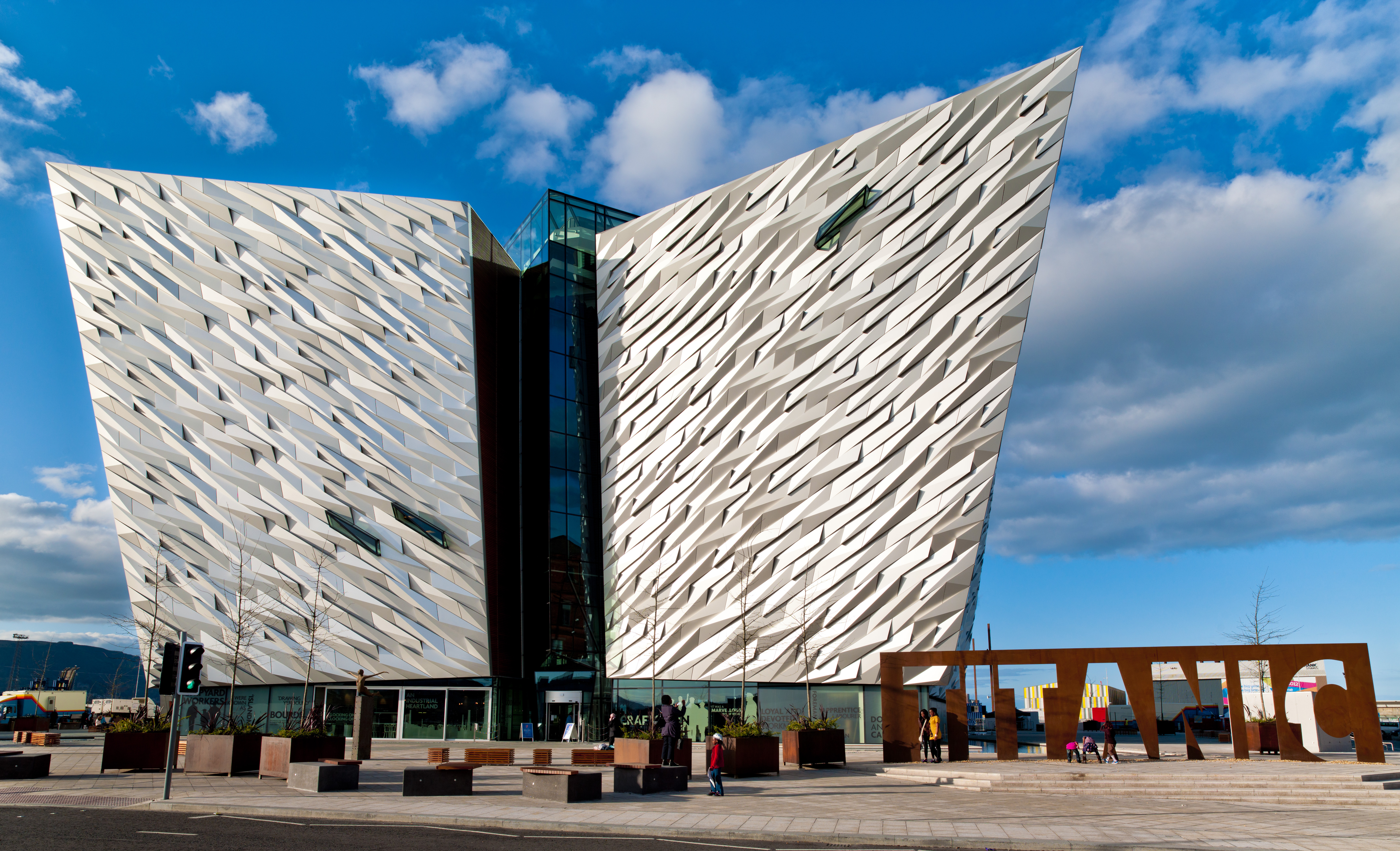 This morning transfer to Belfast Ferry Port. Board the ferry to Cairnryan, Scotland, as walk-on passengers. After arrival in Cairnryan, drive to Glasgow for a panoramic tour of Scotland’s largest city. From the magnificent St. Mungo Cathedral to the People’s Palace and Glasgow Green, explore Glasgow’s rich past as a religious centre and one of the most important industrial cities in Britain. The Victorian architecture of the city centre offers a striking contrast to the extensive parks of the West End. Among those, Kelvingrove offers a haven of peace in the city, with amazing views on Glasgow University’s striking buildings and the Kelvingrove Museum. Glasgow is home to Scotland’s most celebrated architect, Charles Rennie Mackintosh. Check into your hotel in Glasgow.
Dinner at the hotel. (B,D)

Depart for the Battle of Bannockburn Visitor Centre. In 1314, in what became one of the defining moments in Scottish history, King Robert the Bruce routed the English forces of King Edward II to win a much-longed-for freedom for the Scots. The Battle of Bannockburn was one of the greatest and most important pitched battles ever fought in the British Isles. Take your place on the battlefield. Stand face-to-face with fearless medieval warriors.
Witness two opposing kings who changed the path of Scotland’s history. Harnessing state-of-the-art 3D technology, visitors can experience medieval combat like never before to learn about this crucial event in Scottish history.
Enjoy a cruise on Loch Lomond – the jewel in Scotland’s first National Park. The cruise allows you to access the inaccessible on the eastern shore. Continue to Tyndrum. Dinner at the hotel. (B,D) 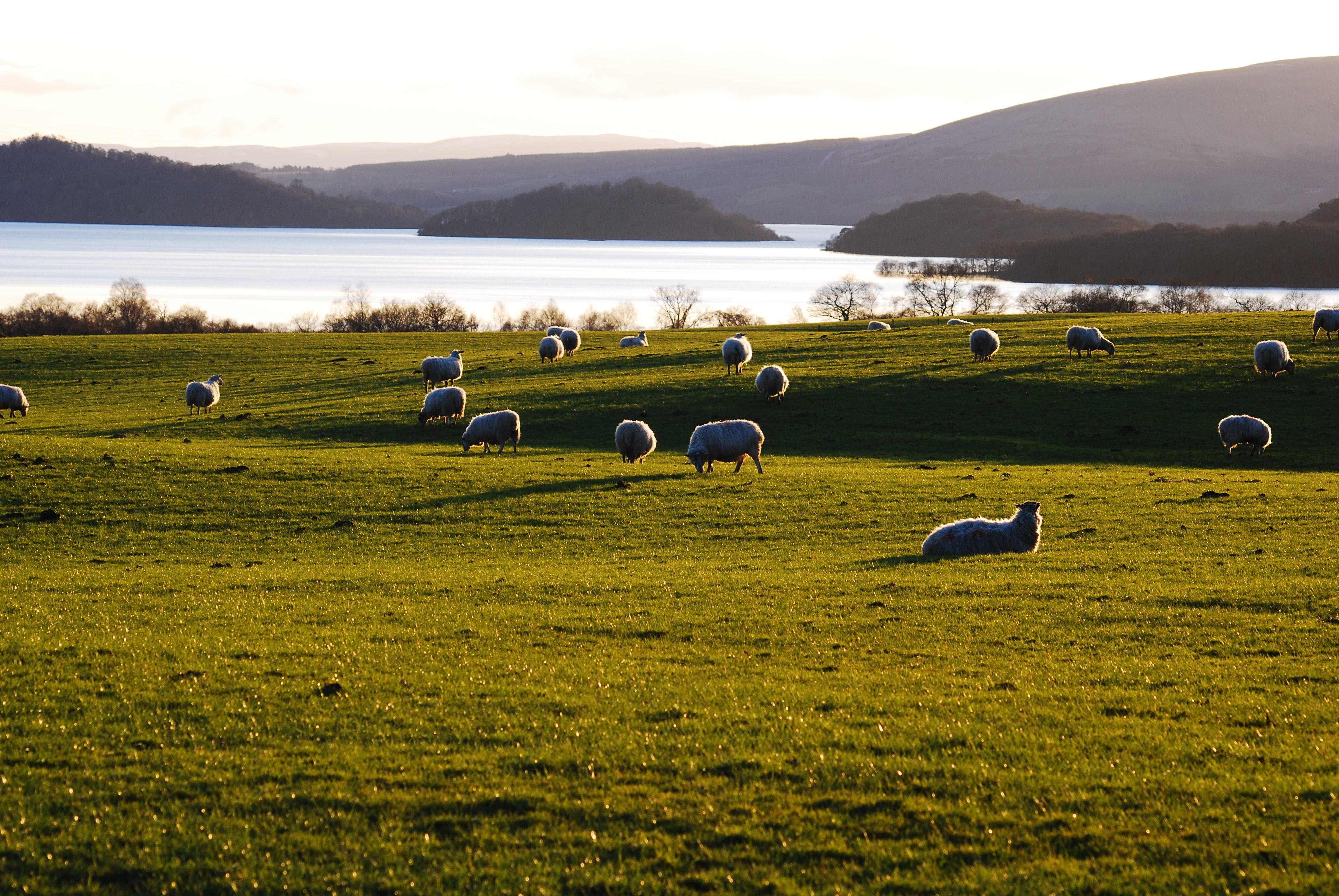 Today enjoy the views of Glencoe and Ben Nevis while you journey to Fort William. Possible performance by the Red Deer & District Pipe Band at High Street in Fort William. Check into your hotel.
Optional: experience the Highland Games (to be confirmed once 2020 schedule is announced). (B)

Take your place on board the Jacobite Steam Train. Chugging through the misty lochs and sweeping glens of the Scottish Highlands, this is one of Britain’s greatest train journeys, taking passengers on a nostalgic ride between Fort William in the West Highlands and Mallaig on Scotland’s west coast. The 135km roundtrip route passes Ben Nevis, Scotland’s highest mountain, and the Glenfinnan viaduct, seen in the Harry Potter films as the Hogwarts Express. Return to your hotel and enjoy some free time. (B) 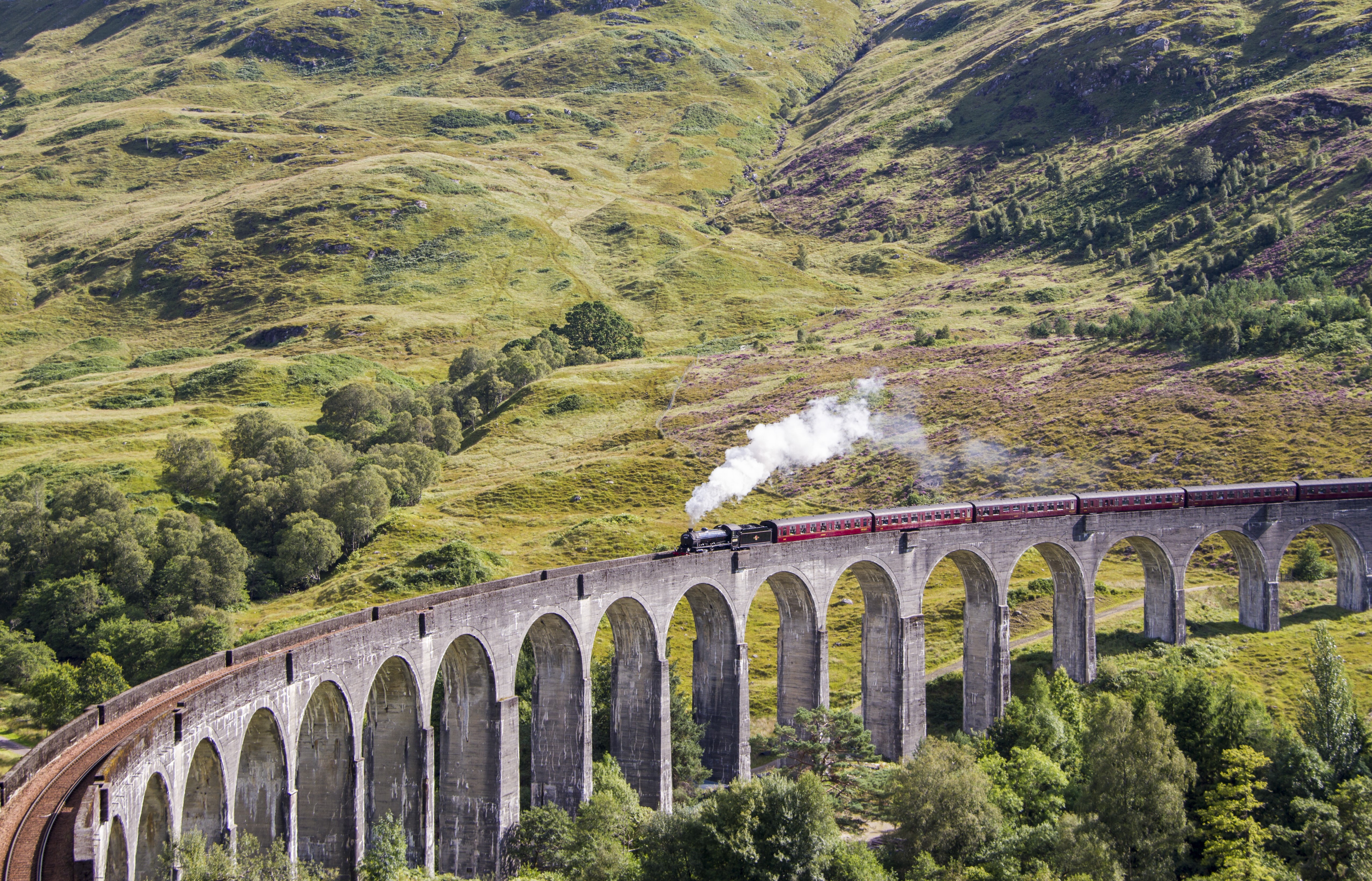 Depart for Blair Castle, the ancient seat of the Dukes and Earls of Atholl. Blair Castle has a long and illustrious history, throughout which it has accumulated many fascinating historical artefacts, including antique furniture, art, period dress and arms and armour.
Continue to Blair Athol Distillery, established in 1798, and one of the oldest working distilleries in Scotland. It produces a 12-year old Single Malt Whisky with mellow deep-toned aromas, a strong fruity flavour and a smooth finish. See the distillers utilizing the most valuable of local resources, the crystal-clear waters of the Allt Dour.
Check into your hotel in Pitlochry. (B) 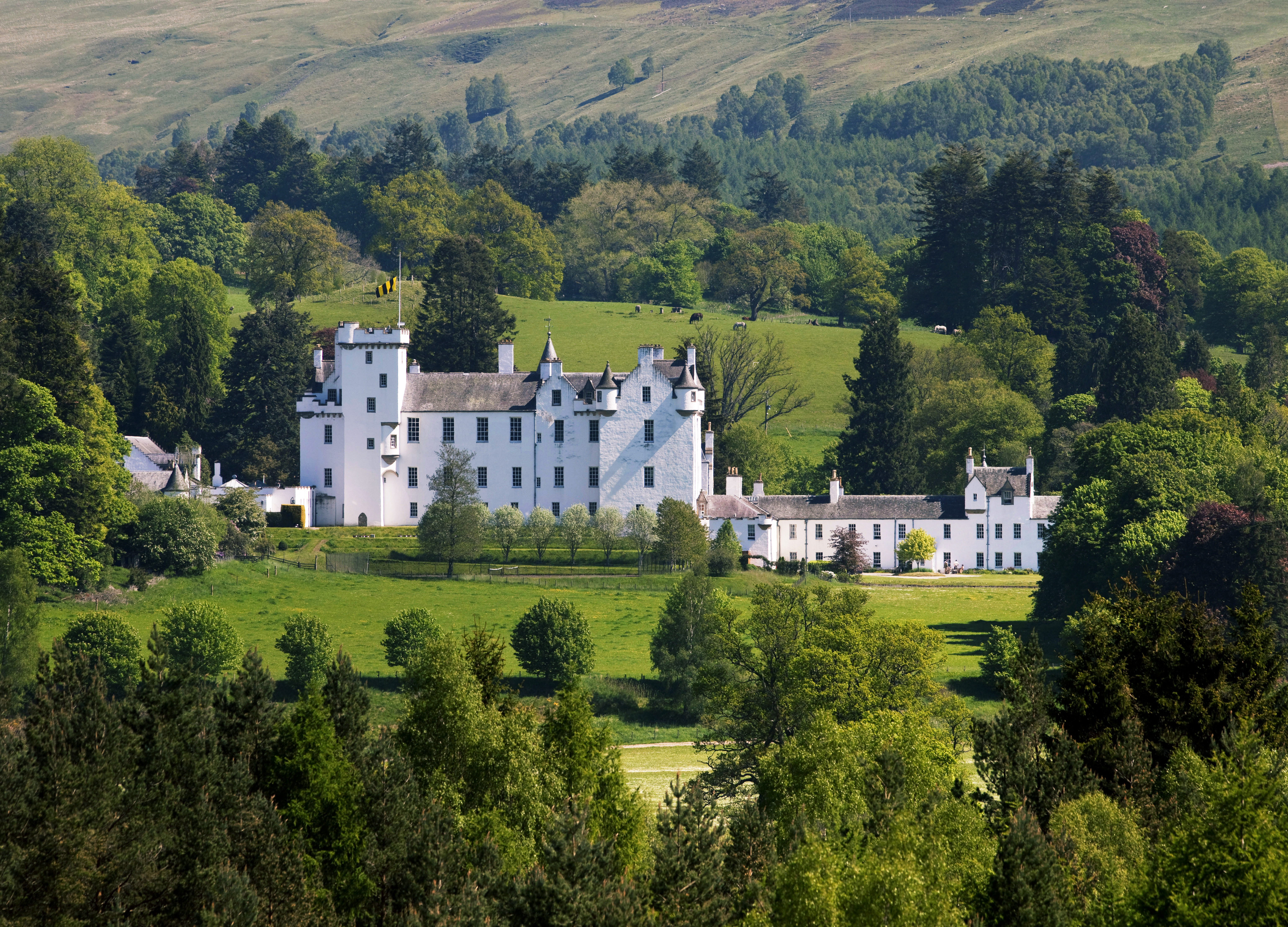 This morning drive to Stirling Castle. One of Scotland’s grandest castles, Stirling Castle towers over some of the most important battlefields of Scotland’s past including Stirling Bridge, the site of William Wallace’s victory over the English in 1297, and Bannockburn, where Robert the Bruce defeated the same foe in the summer of 1314. Situated on a volcanic outcrop guarding the lowest crossing point of the River Forth, it is a great symbol of Scottish Independence and a source of enduring national pride.
Stirling Castle has seen many royal dramas and witnessed the lives and deaths of almost every Scottish monarch up to the Union of the Crowns in 1603.
Continue to the Falkirk Wheel, an exceptional feat of modern engineering. Designed to reconnect the Forth and Clyde Canal and the Union Canal, this remarkable and elegant mechanical marvel is the only rotating boatlift in the world. Check into your hotel in Edinburgh. Tonight attend the Edinburgh Military Tattoo. (B) 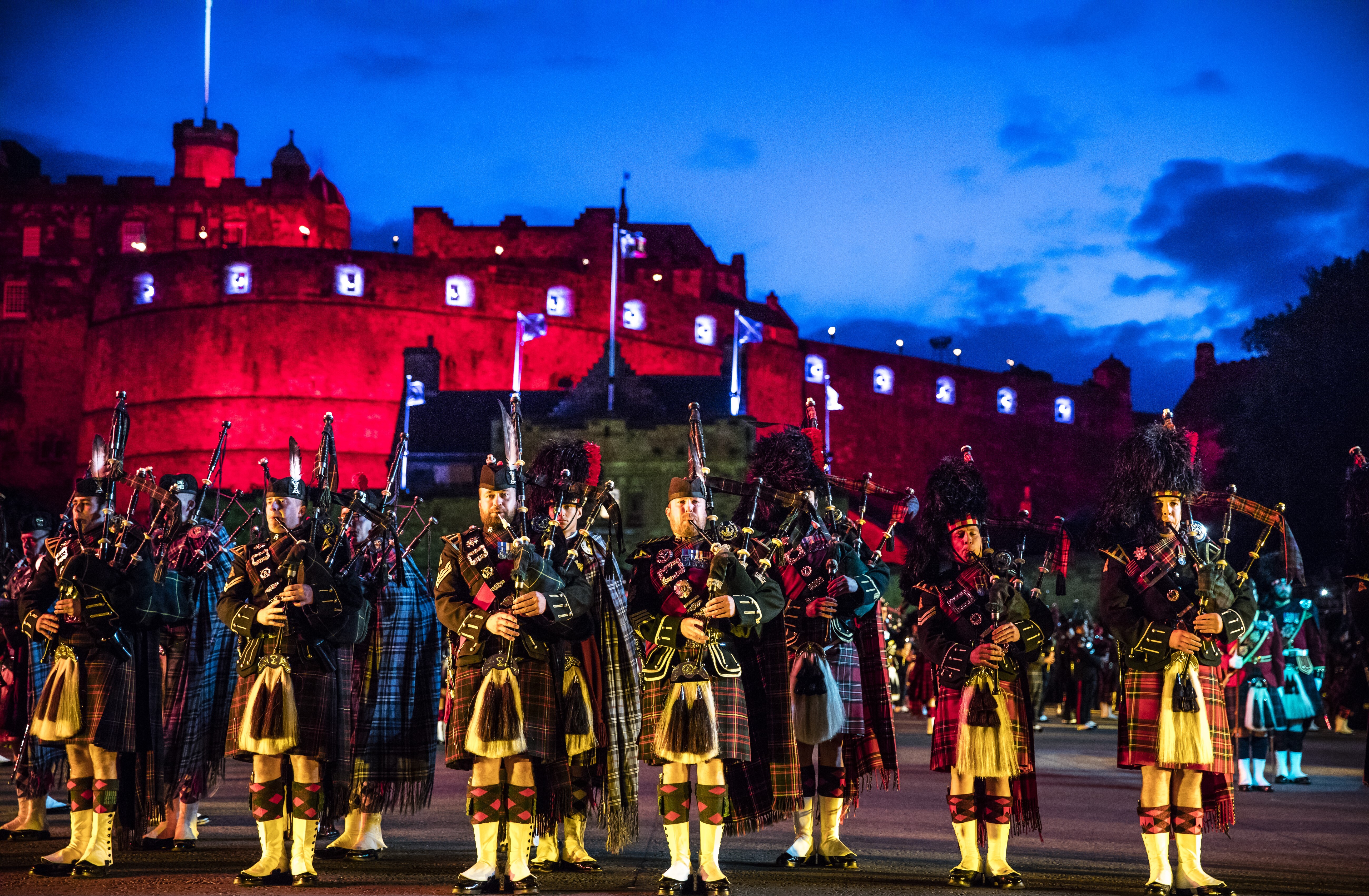 Walking tour of Edinburgh, one of the world’s finest capital cities.
The medieval streets run through the whole city telling their own story about the 1,000-year old traditions and myths of Edinburgh.
Discover the Royal Mile, the Princes Street Gardens and Calton Hill. Afternoon at leisure in Edinburgh.
Tonight join fellow travellers for dinner and entertainment at the Spirit of Scotland. Enjoy a 3-course meal with wine featuring Scottish specialities. You will be entertained by the finest of Scottish talent presenting the beautiful music, poetry and stories. There will be some entertainment between courses with the main show at the end of the meal. Transfer back to your hotel. (B,D) 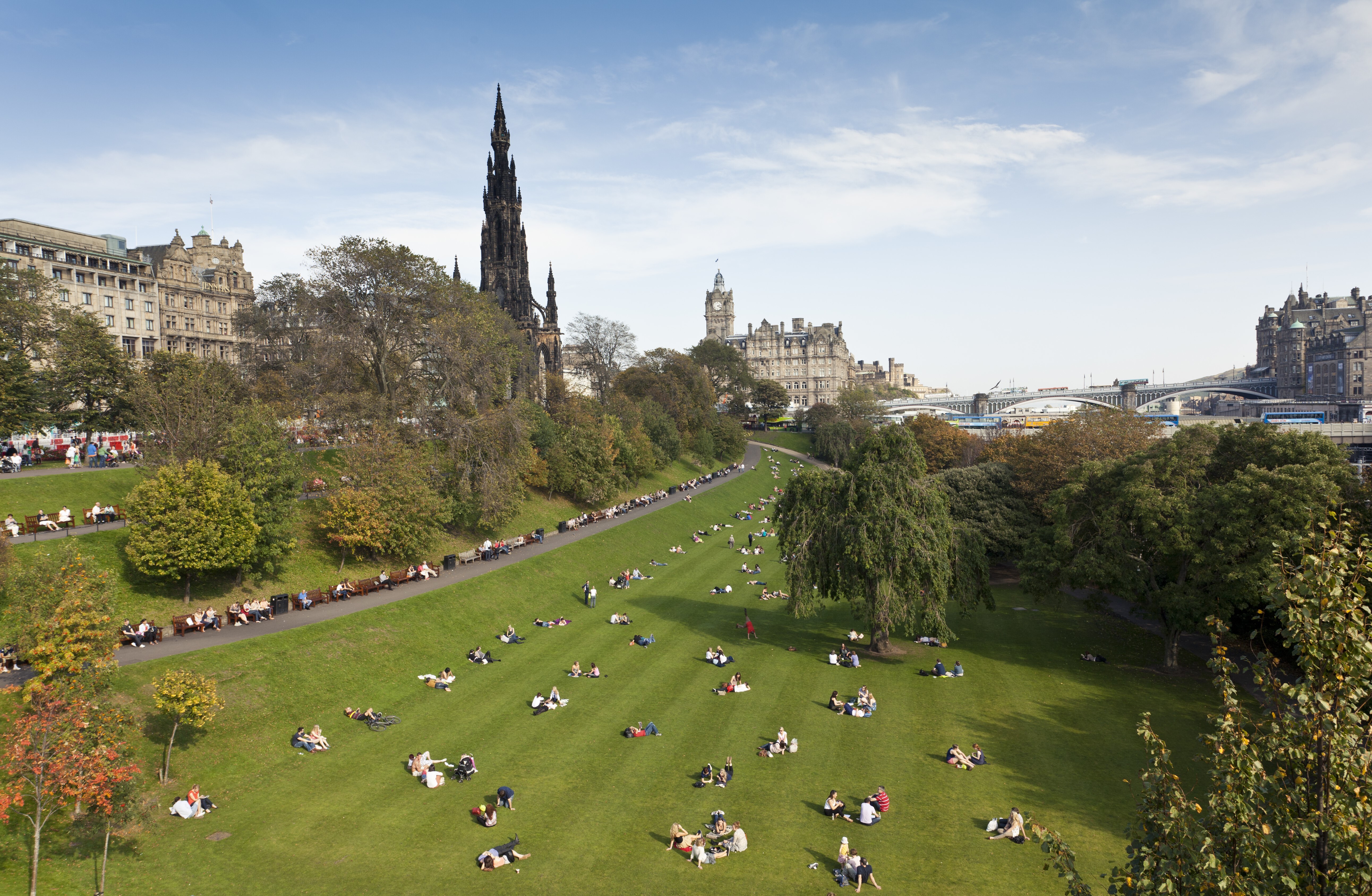 Transfer to Edinburgh or Glasgow Airport for your flight(s) home. (B)